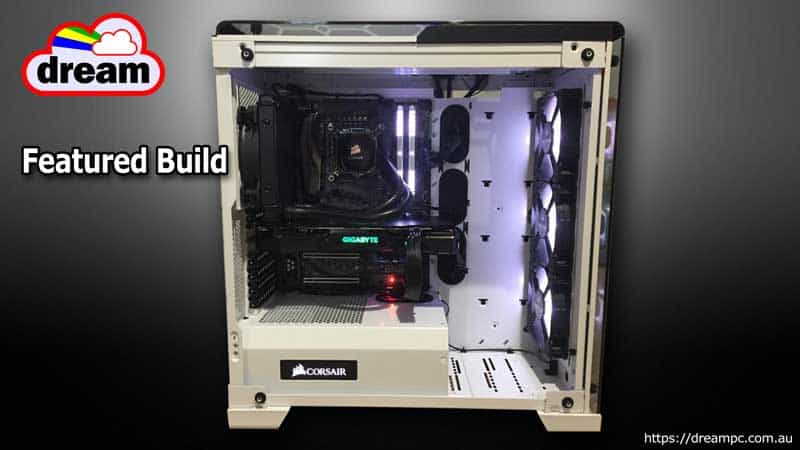 Our featured build this month is an Intel Core i7-8700K Custom Build PC, multi-tasking jack of all trades king of all trades.

This week we built a nice versatile and powerful spec that struck a chord with the community so we thought we’d share it. The customer Ed initially approached us over 2 months ago with a desire of an 8700K PC Custom Build PC for the purpose of experimenting with computers, overclocking and upgrading. At that point, the 8th gen Intel processors were not quite here yet so he decided to hold off until the 8th Gen desktop processors arrived. When they did arrive, they were in short supply so this delayed him somewhat also.

The customer aimed to purchase an 8700K custom build pc so he could learn how to overclock, and have the maximum amount of upgrade options available to him on the latest generation of Intel processors.

When the time was right, Ed got back in touch and he came to our premises to go through his desired specs. At an absolute credit to him, he had been conducting his own research on various products, technologies and performance differences between manufacturers and notified us that he wanted a motherboard we don’t stock:- the ASRock Z370 Taichi motherboard. ASRock is a popular brand and the Taichi motherboard has some interesting features such as tri-M.2 slots. Most boards have 2x M.2 sockets so that is quite impressive. We typically stock the big 3 brands for motherboards; Gigabyte, ASUS and MSI but we don’t currently stock ASRock motherboards. Nevertheless, aiming to fulfil the customer’s needs, we worked with the customer to design a PC spec that has everything except the board. We were able to source the motherboard from an interstate supplier and placed the special order in.

Once the board arrived, we got to work on the 8700K custom build PC. 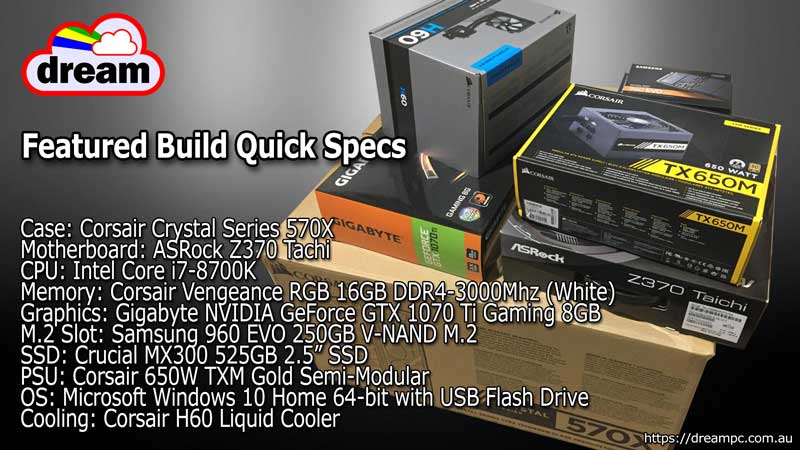 The hardware, in a pile. As the ASRock Z370 Taichi motherboard had to be ordered in from interstate, we thought this may have held up the order for a few days. All credit to PLE Computers and Star Track Express, the motherboard arrived next day from Melbourne to Adelaide. Not bad at all.

The Gigabyte NVIDIA GTX 1070 Ti was a new card in November and they were selling fast. This was actually one of the last of the variations we had in stock. The price point of the 1070 Ti places this card at the top end of the cost vs. performance scale. The ’70 series of cards has always been good value but this offering pushes the performance up that bit extra. We had more expensive and faster-clocked versions of the 1070 Ti the week before but this one certainly was no slouch. 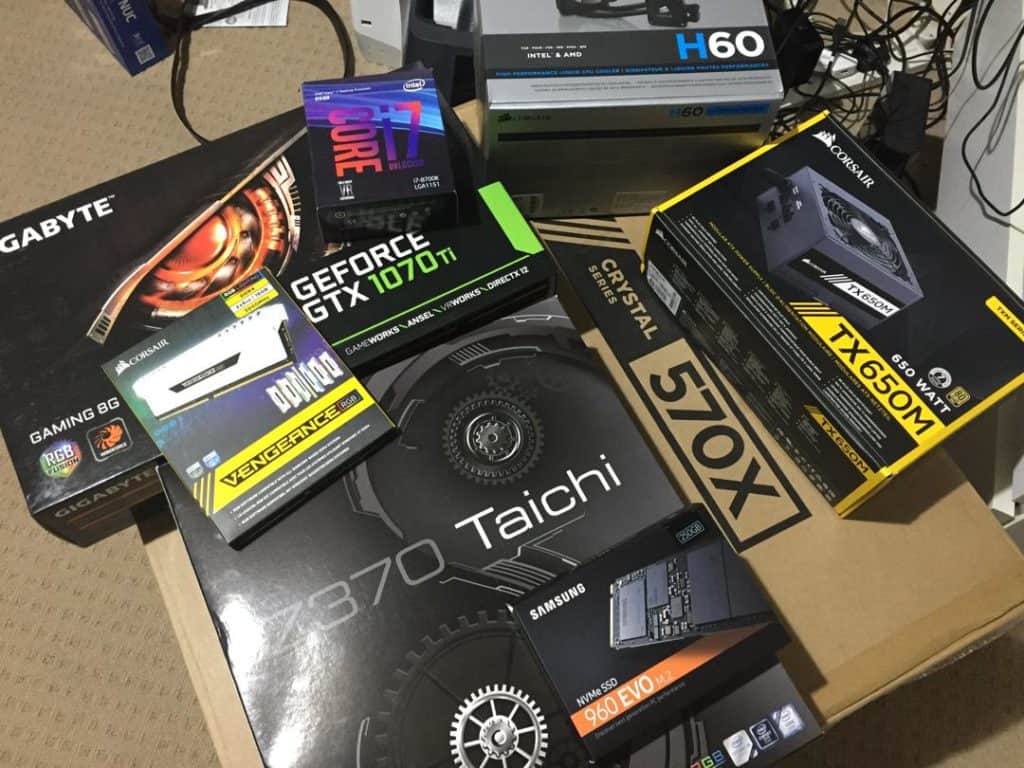 The Corsair Crystal Series RGB 570X case with white trim is a great looking case with its tempered glass panels on the front, sides and top, leaving only the rear without glass.

Building into it was easy. Apart from all sides are visible to everyone so we needed to be on it with the cable management! Thankfully Corsair provided a very handy cable management system on the board-side of the case in the form of a metal tray to hide everything. We managed to hide practically all cables in this track, completing the finish very well.

RGB controller included cases are typically a bit of a cable nightmare with all the wires for all the LED’s running around in there but the Corsair Crystal Series RGB 570X case was fairly light on cables to manage. There is no HDD LED cable or reset switch cable to the front of the case, only Power LED, USB3, HD Audio and then the RGB Controller cables. A synch compared to some. Corsair also included some Corsair branded velcro ties which were nice to have in there to help cure the spaghetti.

Ed stated that despite the case and many components having RGB, he is not really a fan of LEDs. Too flashy, Christmas tree lighty. He asked if we could keep all of his LED’s to white to match the white case. Thankfully the Corsair Link software was very obliging of them, as we were able to set the case LEDs with the case buttons, whilst the Link software controlled the Corsair Vengeance RGB White DDR4 RAM Modules.

ASRock provided some motherboard utility software so we could set the motherboard ‘ASRock’ cog heat spreader to glow white also. And Finally, Gigabyte gave us the AORUS / Fusion software so we could make the ‘Gigabyte’ wording on the GPU set to white to boot. Unfortunately, this meant that we now had 3 bits of software on the system to control all LED options. Not ideal but we’ve had worse. 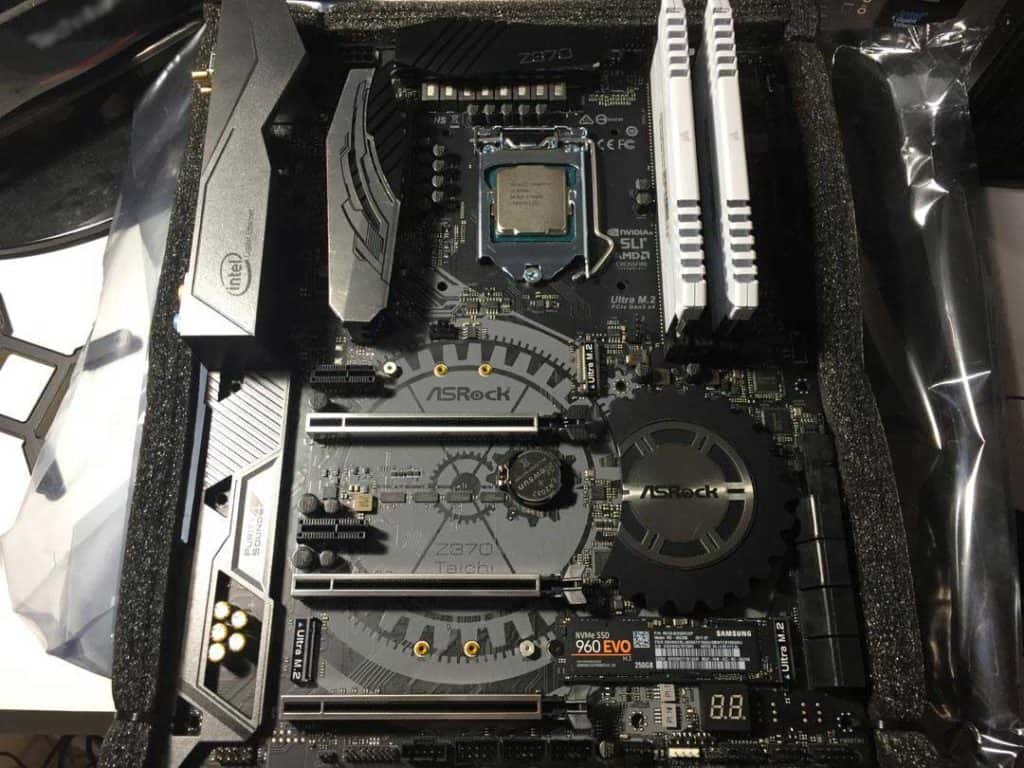 The ASRock Z370 Taichi motherboard was a pleasant surprise. The board overall looked not quite as good as the marketing made it look but in terms of build quality, it was very good. Re-enforced PCI slots, dual Intel LAN sockets, Built-In AC-WiFi, Post LED’s, 7 channel surround sound, 8x SATA 6G ports and no less than 3x Ultra M.2 sockets. We inserted a Samsung 960 EVO 250GB M.2 V-NAND SSD module in the first socket and used it for the system’s operating system due to its impressive read/write speeds. 3,200MB/s Seq. Read and 1,500MB/s Seq. Write and it’s price point of around $229 RRP, It’s simply the best money can buy for value. Samsung’s reliability is amongst the best also.

Intel’s newest CPU offering, the 8th Generation Intel Core i7 8700K is in hot demand also at the moment. We keep seeing small deliveries of stock coming in but immediately selling out again. For this 8700K custom build PC, we were lucky as although the order was placed on backorder for the CPU, the next shipment arrived the next day by coincidence. I believe at the time of writing this article the supply chain has now started to fully stock these CPUs ahead of Christmas which is good for any prospective customers wishing to buy before the big day. 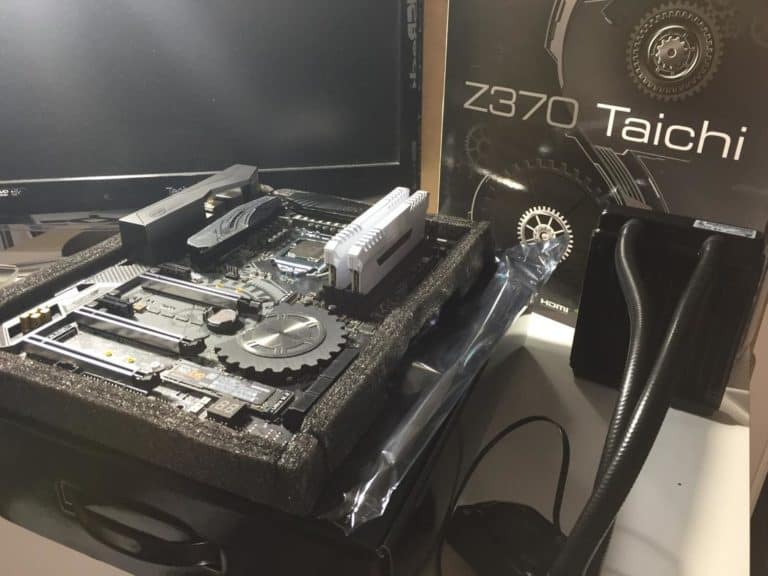 The Corsair Vengeance RGB 16GB DDR4 RAM came in white and it looks amazing. I’ve never really been a fan of the look of the Vengeance memory heat sinks, preferring the look of the G.Skill Trident when it comes to RGB but in white these look actually more fitting, especially when you consider you have a Corsair case, PSU, cooler and now Memory modules. I’m a fan of consistency and would buy all Corsair or other brand if I could to make it all super-standard.

As mentioned previously, the memory LEDs are controlled by the Corsair Link software and white was the order of the day. We also looked at the diagram of the system in the Link software and found that it did not have an image of the 570X case, so we took a photo of the inside of the actual build, quickly photoshopped out the surrounding background and placed it inside the software. Now the Link software shows the correct image of the PC it is controlling. It is the little touches that count!

In the system BIOS, we updated to the latest revision of firmware and then set the memory profile to XMP as per usual to unlock the full potential of the 3000MHz DDR4 RAM modules. 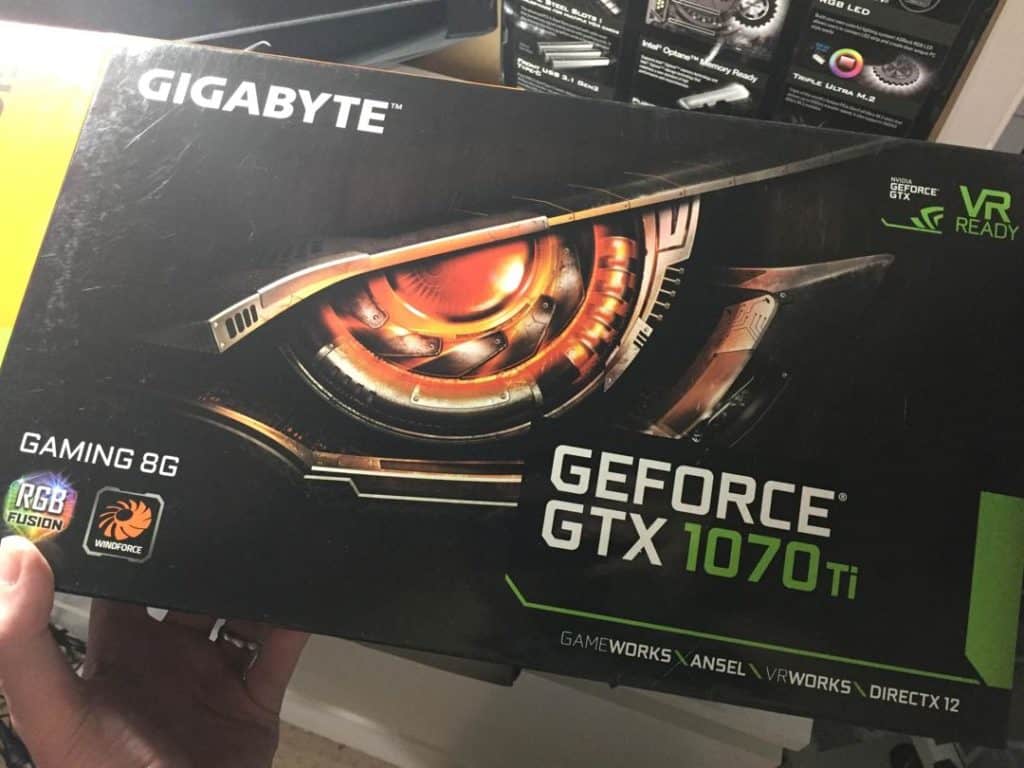 The Gigabyte NVIDIA GeForce GTX 1070 Ti 8GB graphics card is the card of the year in our books, combining performance without all the hype-filled price tag of the 1080 Ti we endured earlier in the year. It is late to the table and it cleverly captures the market of customers that couldn’t quite convince their partners to stretch to a 1080 / 1080 Ti but have saved up enough now to reach the 1070 Ti instead. This particular card model is closest to the reference card spec but it does have the widely respected Windforce fans and RGB fusion. It has 8GB of GDDR5 memory which covers all current gen games with ease and not only is VR Ready but it will also do VR very well.

This is the all-rounder of the NVIDIA line-up for sure. The motherboard is SLI-compatible so at any point, Ed can purchase another 1070 Ti and link the two. 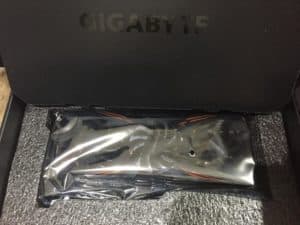 The Corsair TX650M is a fairly mid-level power supply but it is a good quality, semi-modular offering. This is very important when you:

You can cut down on the cable clutter. Over the years we’ve come to love the Corsair power supplies as they very rarely set houses on fire. Their price point is also reasonable so why not?

And finally, we installed a Corsair H60 cooler in the system to keep all the temperatures in check. With a few bios tweaks to get the fan & pump running at the right speeds, we were able to get the system cool and quiet, just as intended. It should also allow Ed to tweak the overclock a little here and there without setting off any temp alarms. The case does provide options to ‘go large’ if he chooses to get into serious overclocking, however. This build is a good place to tinker and learn with plenty of upgrade options. Perfect for Ed’s needs.

The result then is an 8700K custom build PC that looks great and goes better – without completely breaking the bank. I would recommend this build for many applications. It checks all the boxes whether you are:

(With its Quad-SLI capable board, bitcoin mining is going to go pretty well with 4x 1070 Ti’s.)

For more information on this build or to build your dream pc similar to this 8700K custom build PC please reach out: