Esports, for the uninitiated, is short for electronic sports, and refers to video games which are played competitively by professionals. This has become a massive phenomenon in the modern world, with millions upon millions in prize money sloshing around, and pro gaming superstars who get sponsorship deals and similar perks just like real athletes.

But it wasn’t always like this. Esports were once a very niche pursuit, but have grown and increasingly gathered momentum over the years. So first off, let’s get a hit of nostalgia and take a look back at the origins of esports, before moving on to gauge just how big professional gaming has become in recent times. 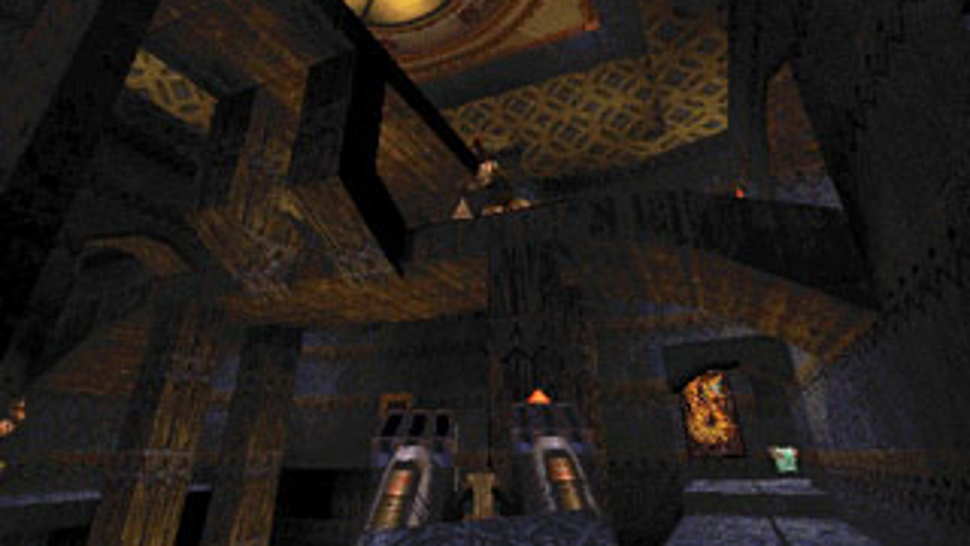 The original Quake. It was a lot better than it looked, but the graphics weren’t the point. The physics and fast and fluid shooter gameplay were an absolute revelation at the time (Image Credit: Steam)

The humble origins of esports

Shooters, in a word. This is where it really all began in the nineties. Sure, ever since video games have been around there has always been competition, but we’re not talking about trying to get the highest score on Space Invaders as seen at Atari’s 1980 event, the national finals of which featured over 10,000 gamers from across the US, and was won by Bill Heineman.

Yes, this was undoubtedly an impressive milestone in competitive gaming – but not professional gaming, we’d argue. These gamers weren’t going directly head-to-head as such, but rather competing against a high score, and moreover, there were no big-ticket prizes. By all accounts, Atari’s headline prize was a Missile Command tabletop video game; pretty neat, but it’s no Ferrari.

We mention the latter, because what we (and others) regard as the first real esports tournament had a Ferrari as a prize – John Carmack’s (of id Software) Ferrari 328 GTS, to be precise. This happened in 1997, with the car being won by Dennis Fong (gaming nickname ‘Thresh’) who was victorious in a Quake tournament that went under the name of ‘Red Annihilation’.

Quake – and QuakeWorld, which facilitated the more widespread play of the shooter online by tuning the net code to make things (mostly) playable on a dial-up modem – subsequently helped to drive the competitive online gaming scene, with a load of amateur leagues and home-grown competitions springing up (like the United Kingdom Clan League in the UK, to pick a scene we were involved in – hey there any QPD folks, by the way).

And then professional bodies appeared, such as the Cyberathlete Professional League (CPL), and AMD’s Professional Gamers League (PGL), which were both formed in 1997, the same year as Thresh’s Ferrari-winning antics. 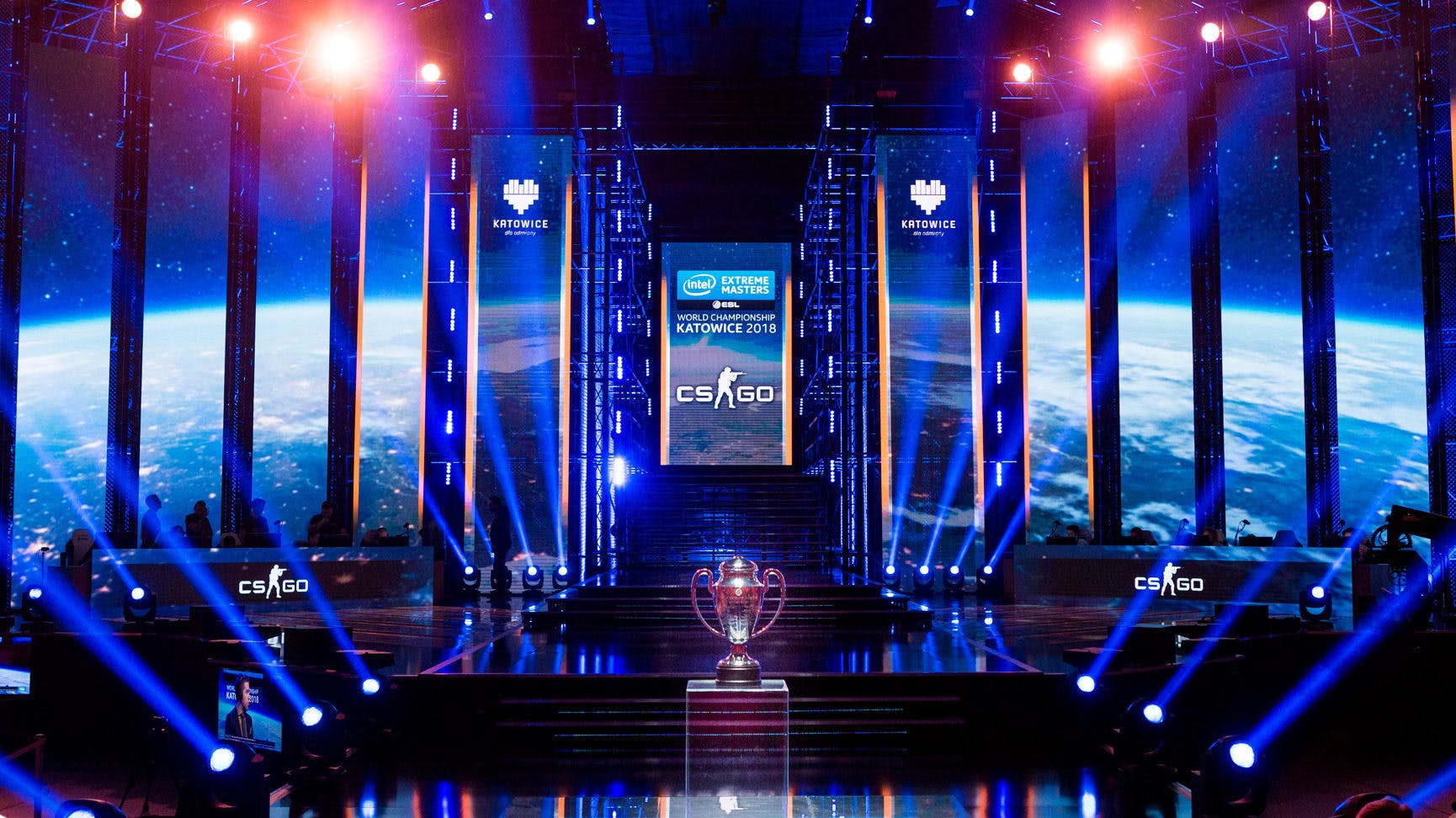 These days, a $40,000 grand prize looks a pretty trifling affair. Indeed, the esports scene has matured so that now it’s not just about prize money, but professional players who are fully salaried. 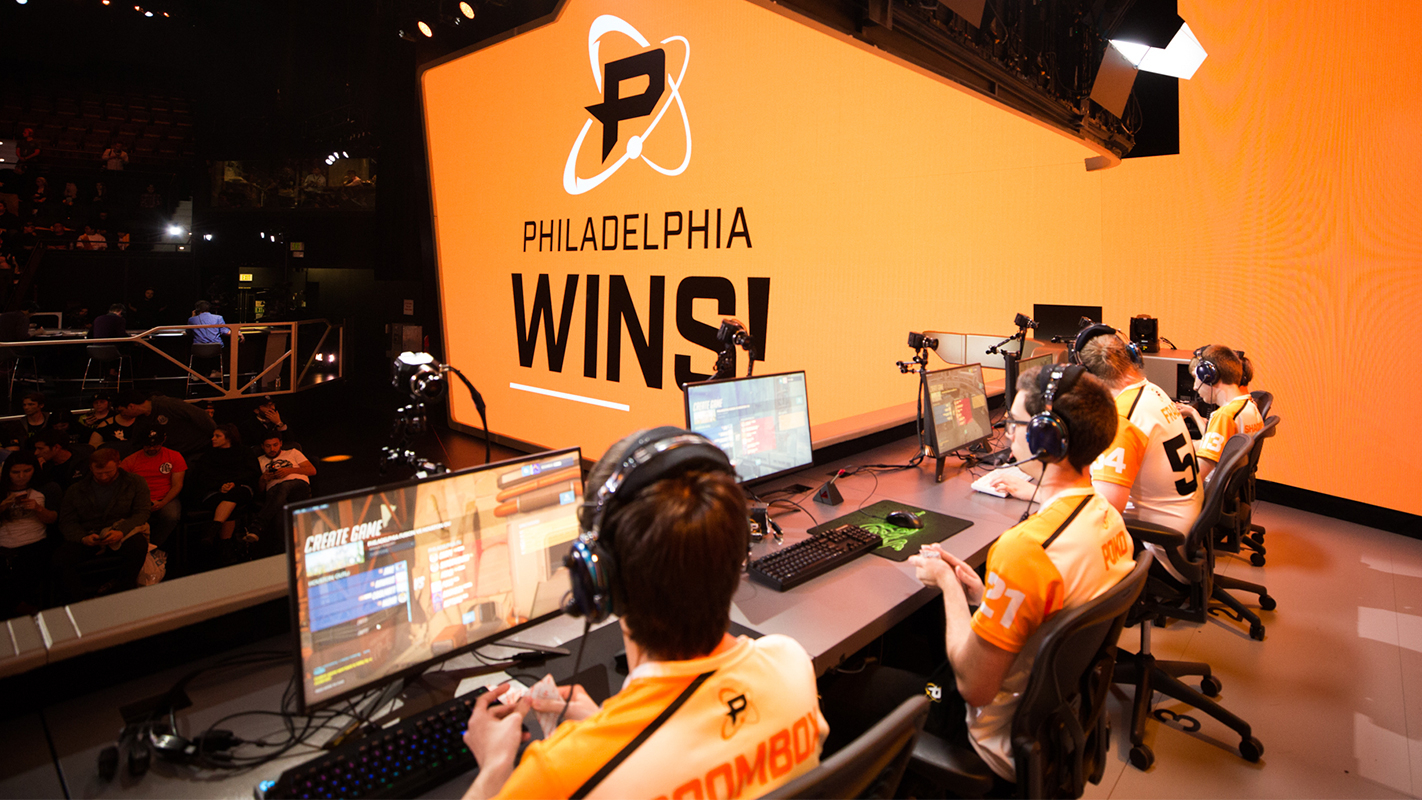 Now, the London Spitfire are hardly the New England Patriots, but Blizzard’s esports league does mirror that of a real-world professional sport to some extent in terms of having transfer windows, free agents, and so forth (and of course specifying a baseline salary, as mentioned, plus health and retirement benefits, and so on).

Overwatch, though, is relative smaller fry compared to some of the true heavyweight games of the contemporary esports scene. These days, the biggest hitting title isn’t a shooter, but a MOBA (Multiplayer Online Battle Arena). For the unfamiliar, these are essentially action RTS games with some RPG elements.

Dota 2 is a MOBA and the king of all esports games, at least in terms of total prize money. According to Esportsearnings.com, Dota 2 has paid out some $175 million (around £135 million, AU$250 million) down the years. League of Legends, another MOBA, is in third place with $64 million (around £49 million, AU$91 million) – and as we write this article is the most-watched game on Twitch by a long way.

Sandwiched between those two is the most high-profile esports shooter: Counter-Strike: Global Offensive, weighing in with $70 million (around £54 million, AU$100 million) in prizes given away in the past, with a staggering near 4,000 tournaments having taken place across the globe.

Other popular esports games include Heroes of the Storm (another MOBA), and battle royale extravaganzas Fortnite and PlayerUnknown’s Battlegrounds. Also, we shouldn’t forget StarCraft II, the classic RTS which is still going strong and being played competitively for big bucks today.

And Hearthstone, Blizzard’s online card game, a turn-based think-athon which is very different to the company it’s keeping in the top echelons of esports (and also illustrates the creeping diversity present in the competitive gaming arena, compared to the early days – bear in mind that even the likes of Farming Simulator has made the transition to esports recently).

Of course, the success of these games in terms of reaching a large audience of keen esports viewers is driven by the major leagues and organizations who are putting together large-scale tournaments complete with huge headline-grabbing pots of cash for the winners. 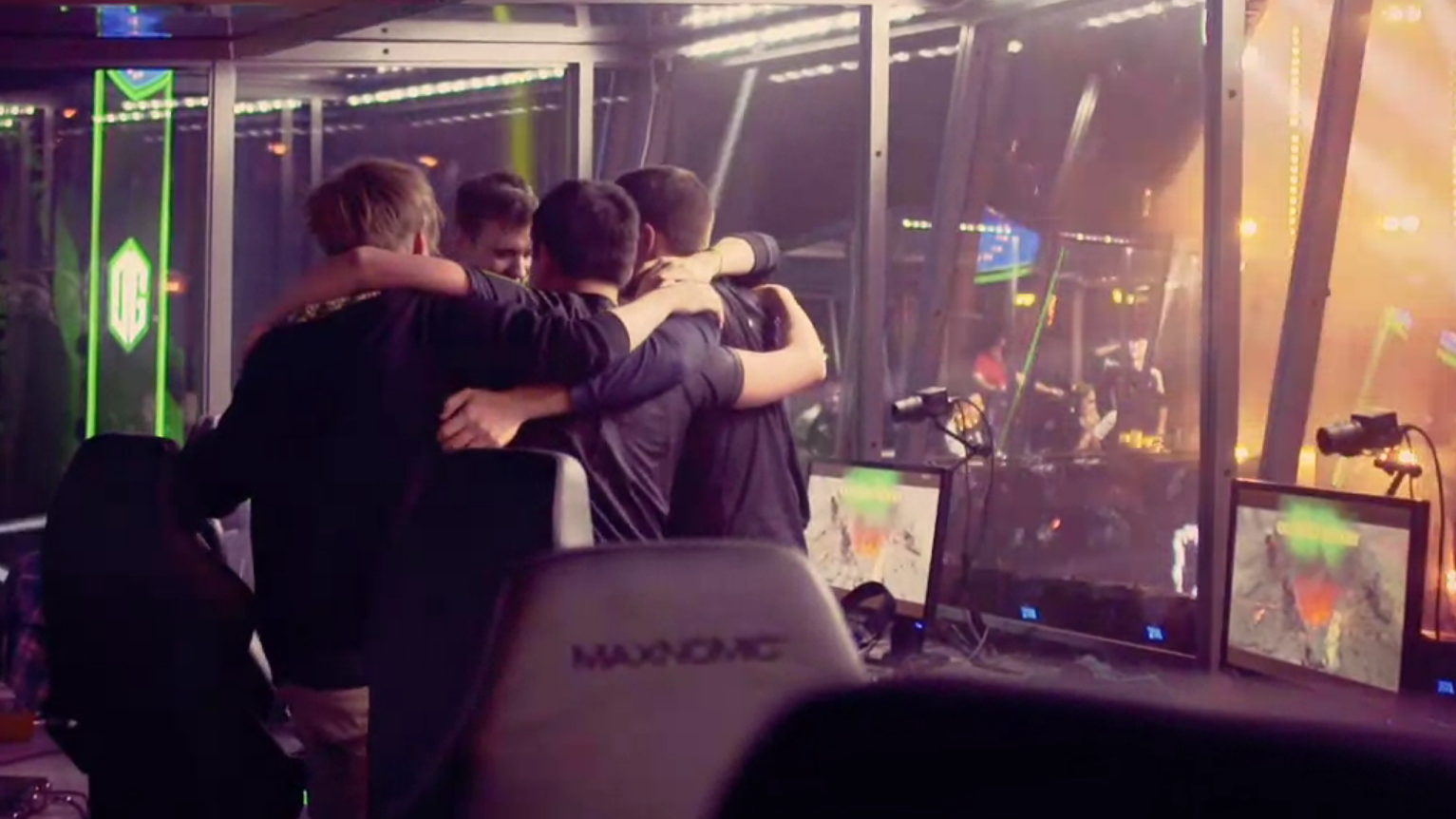 Team OG doing what they do best – winning. They are the third-highest earning team of all-time according to Esportsearnings.com, behind Evil Geniuses, with Team Liquid at the top (Image Credit: Team OG)

That’s a massive annual individual tournament, but on a broader level, we have the ESL, an organization which hosts a variety of official pro leagues for different games, and major events like the Intel Extreme Masters (IEM), the longest-running global pro gaming tour which attracts a huge viewership. Indeed, IEM Katowice 2017 witnessed a live attendance of 173,000 in a giant arena with a full-on opening ceremony, and there were around 46 million people watching online.

In some ways, perhaps even more than the copious amounts of prize money, the fact that these esports events can now attract tens of millions of viewers underlines just how far things have come. As does the creation of new esports leagues by major sporting bodies like UEFA – with the eChampions League that has just kicked off this year – and the ePremier League in the UK, not to mention the FIFA eWorld Cup. 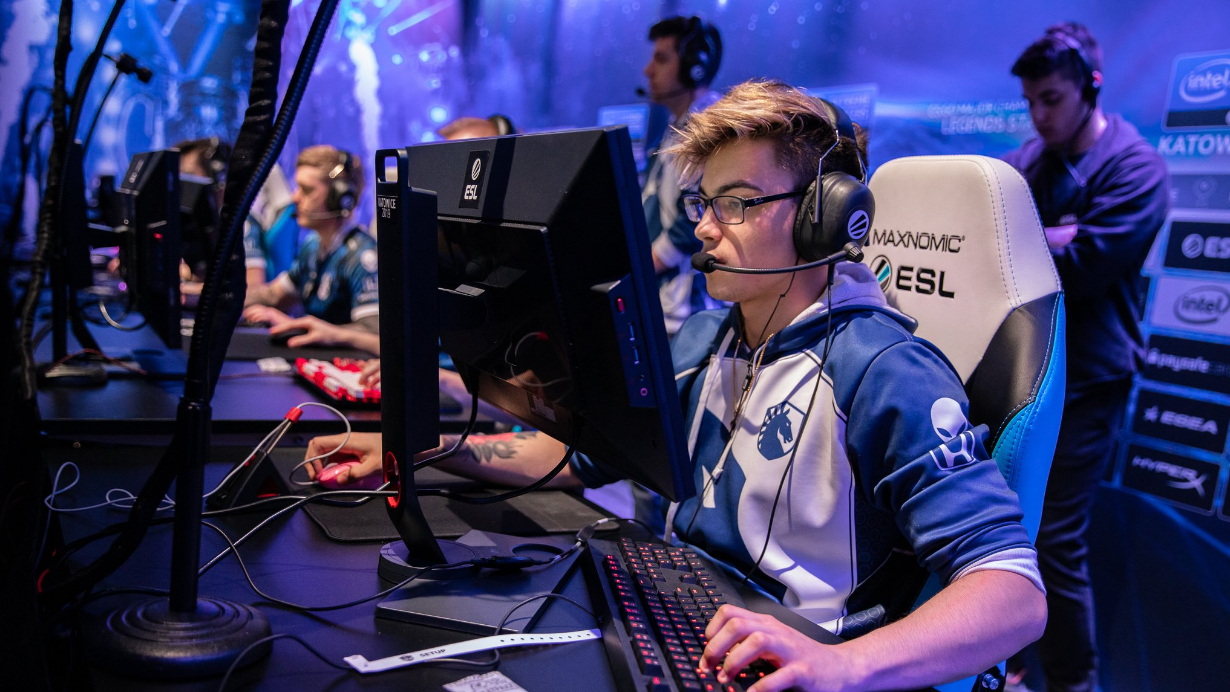 A wider audience are also tuning into esports events since they started being featured on TV, with the likes of BT and Sky providing coverage in the UK. The latter began by showing one-off major events like the aforementioned IEM, but momentum has grown, and Sky now has its own dedicated esports channel: Ginx Esports TV, which is actually available across 50 countries (in 10 different languages).

Nothing better illustrates the global ambitions of esports, though, than the push to include competitive gaming in the Olympics itself, a campaign which began a couple years ago with discussions about making esports an official part of the Olympic Games in 2024.

The outcome of that drive is still uncertain, and although there is the possibility that esports could be included officially as a ‘demonstration sport’ at Paris 2024, the latest comments made by the International Olympic Committee have still been of a stalling nature. Meanwhile, looking to China, esports are already being included as an official part of the 2022 Asian Games.

Perhaps the really key piece of the puzzle when it comes to the potentially impending domination of esports is, as Deloitte observed in a recent report, that there is a “young demographic of digital natives who are less engaged with TV and professional sports than previous generations” that esports broadcasters can tap into.

In other words, there is a seemingly fundamental societal shift away from traditional sports to the electronic variety, and it’s predicted that this will help to drive esports revenue to over a billion dollars this year, with big money to be made via advertising, sponsorship, broadcast rights, and even betting companies are getting involved.

Is competitive gaming truly primed to take over the sporting world? We certainly wouldn’t bet against it, and neither would Konami, which is just constructing a towering 12-story building in Tokyo which will be a dedicated esports center complete with an arena.

Konami’s president Kimihiko Higashio believes: “The people who participate in esports will in the future, stand side by side with those participating in real-life sports like soccer, or even surpass them.”