It has been a historic week for fans of virtual reality gaming: Just as Facebook dropped the details on the launch of the Oculus Rift S, Valve jumped in to offer up its own details on its high-end Valve Index VR headset.

It was a one-two punch of premium VR news that will radically reshape the VR landscape that has been dominated, largely, by the cheaper, console-focused PlayStation VR.

The only problem with all these new options, however, is that two brand-new headsets – plus the pre-existing (and very good) HTC Vive Pro – could paralyze potential adopters of high-end VR.

If all this valuable VR hardware has you in a daze, allow us to clear up the confusion, call out the differences and generally compare the three best-performing headsets heading our way in 2019.

Here’s how the HTC Vive Pro, Oculus Rift S and Vive Index are stacking up.

As head-mounted devices, there are some similarities between all three of these headsets, but they all take somewhat different approaches.

The Oculus Rift S uses a Halo-style headband with a knob that tightens the band to fit snug on your head. This allows for less pressure against your face from the display housing. There’s also an adjustable band that goes over the top of your head.

The HTC Vive Pro and Valve Index use similar headband styles, with a tightening band that goes around the sides of your head and a top strap. This style can result in a bit more pressure on the front of your face. But, all three use a knob to dial in the tightness, making it very easy to take on and off and fit to different users heads.

The Rift S features small speakers built into the headband for stereo audio, but also includes a 3.5mm headphone jack to use with your own headphones. The Vive Pro has built-on headphones that you can position over your ears as needed. Meanwhile, the Valve Index has a similar audio design to the Vive Pro, but uses small speakers that don’t press directly onto the ears.

All three headsets require cables running from the headset to a powerful PC. The Valve Index has a cable that splits at the end into USB 3.0, DisplayPort 1.2, and 12V power connectors. The HTC Vive Pro cable connects to a breakout box with power, DisplayPort, and USB 3.0 connnections. The Oculus Rift S keeps it simplest with a cable the splits into a USB 3.0 and HDMI connector.

All three headsets also have cameras on them. The Valve Index includes two cameras on the front that aim slightly downward, but they currently have no function. The HTC Vive has two on the front that aim straight ahead, and they can enable native hand and finger tracking in some programs. The Rift S has five cameras with two in front, two on the sides, and one on top, and these are used for tracking and pass-through of your surroundings when needed.

As we’ll explore more in the Tracking section of this comparison, the Rift S only needs the cameras built onto it for VR. The Vive Pro and Valve Index meanwhile also need external base station cameras to track the movement of the headsets and controllers. 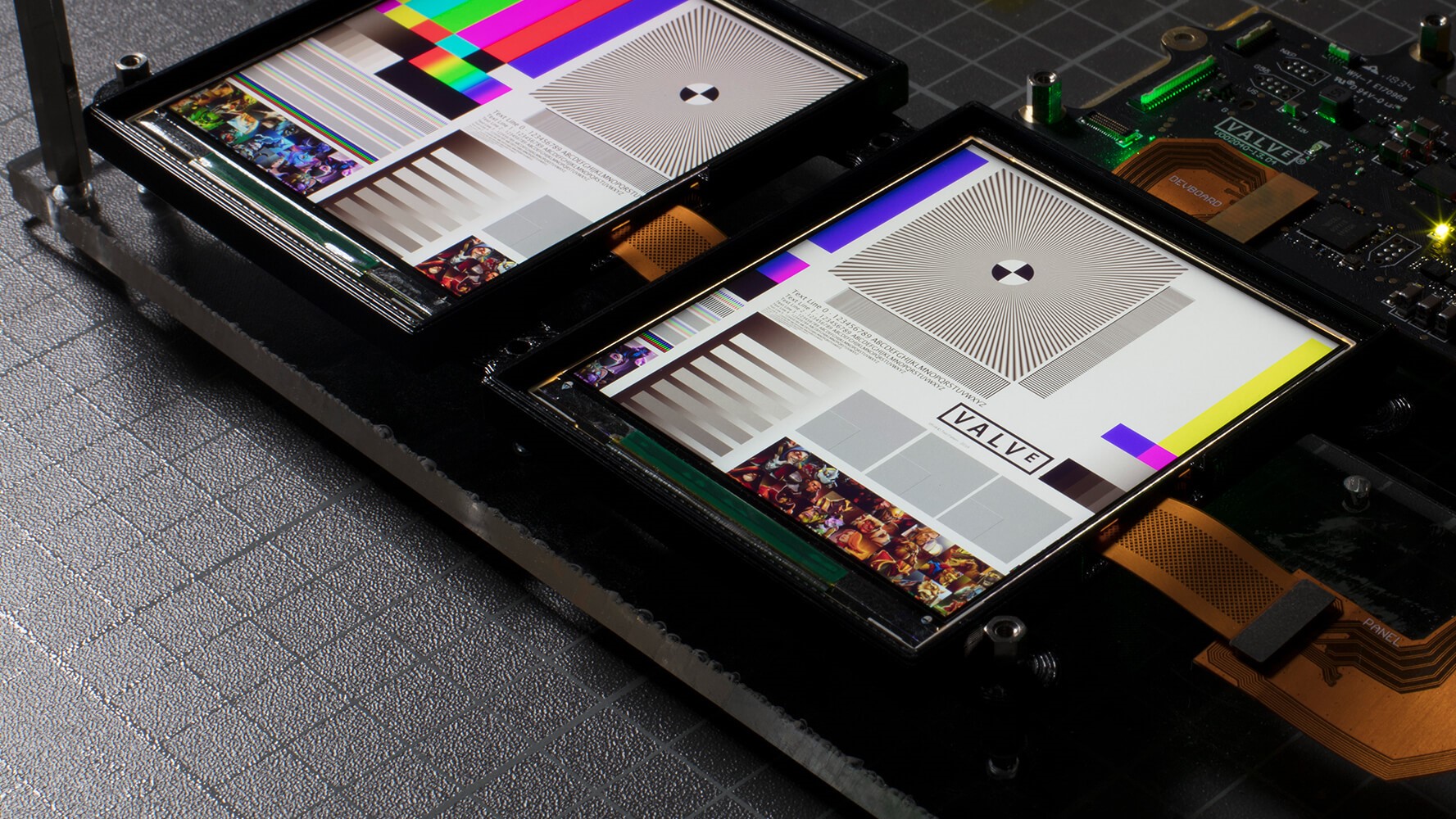 The displays are an incredible important aspect of VR headsets, as they can serve to make or break the experience. And, between the Vive Pro, Valve Index, and Rift S, there are considerable differences in display.

Pretty much at the bottom of the stack is the Oculus Rift S. It uses a single 2560 x 1440 resolution fast-switch LCD panel with an 80Hz refresh rate. While this improves on the resolution of the original Rift, it reduces the speed of the refresh rate, and the LCD doesn’t offer the rich blacks of OLED panels. The headset does use improved lenses that reduce reflective aspects we saw in the original Rift. But, there’s only software IPD adjustment (for setting the distance between your pupils), which doesn’t have as much range or effectiveness as a hardware slider than moves the screens and lenses.

The HTC Vive Pro steps things up with its displays. It uses two separate AMOLED displays the combine for a 2880 x 1600 resolution and run at 90Hz for smoother motion. While AMOLED displays have their issues when it comes to screen-door effect in VR, the bumped up resolution of the Vive Pro mostly eliminates that problem. The Vive Pro offers a 110-degree field of view and hardware IPD adjustment.

The Valve Index tops the field in most respects. With dual displays canted at 5-degrees, it’s offering a 130-degree field of view with hardware IPD adjustment. And, that view is crisp with a combined resolution of 2880×1600. While that resolution matches the Vive Pro’s, Valve is using LCD panels that have more subpixels than typical pentile OLED displays, making for clearer imagery. And, Valve tops all that off with a 120Hz refresh rate that can bump up to 144Hz, for incredibly smooth visuals that may dramatically improve immersion.

While the LCD’s in the Valve Index may not offer as impressive a contrast ratio as OLED’s, the rest of the package seems like it’ll help it stand above its competitors. 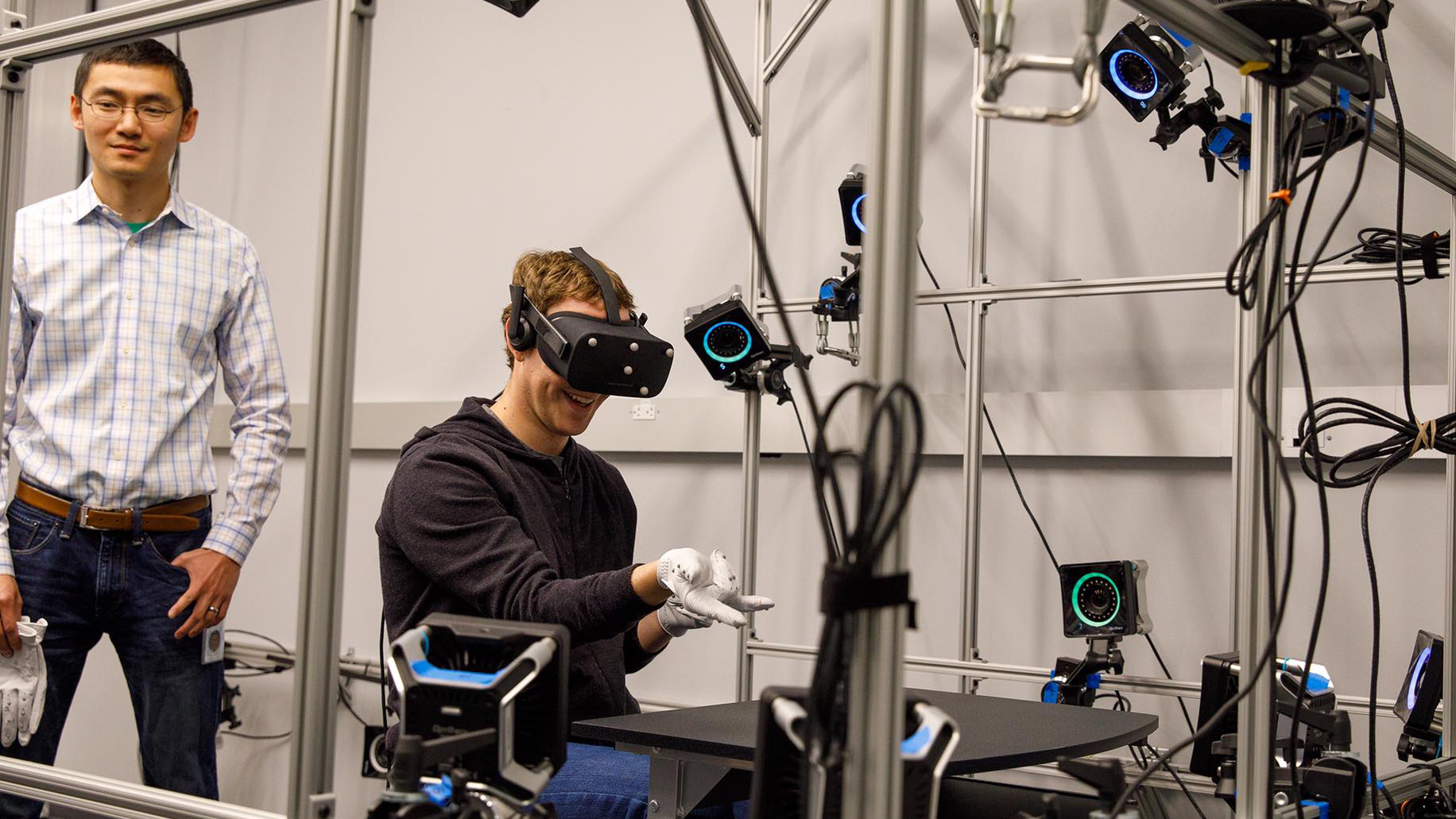 We’ll start with the Oculus Rift S because it has a unique system compared to the others.

The Rift S uses what’s called inside-out tracking. Using the five cameras built onto the headset, the Rift S maps the area around you, and as you move, it changes your view in VR. It doesn’t need external cameras to track its movement. This makes it the simplest to get set up. The cameras also track controller movements. However, with no cameras on the rear of the headset, the Rift S has to guess at their movement, and can’t precisely track them behind users backs.

Both the HTC Vive Pro and Valve Index use outside-in tracking. This requires external cameras placed around a play space to monitor the movements of the headset and controllers. Two cameras can effectively create a large play space and track controller movement even behind users backs. The setup process is more involved though. The overlap doesn’t end there either, as both headsets can use the same SteamVR 1.0 and 2.0 base stations. 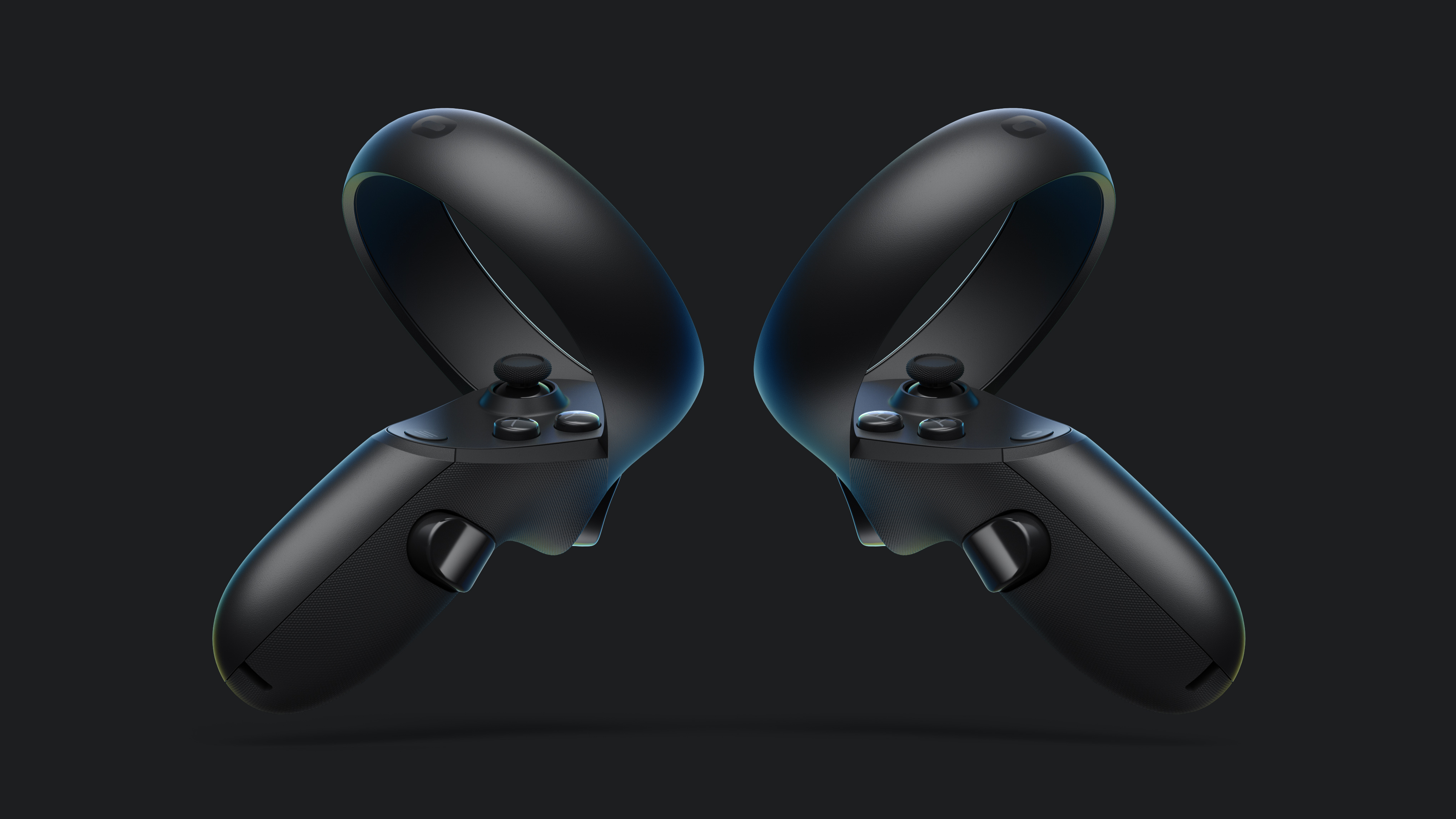 The Vive Pro uses the same wand controllers as the original Vive. They have side grip buttons, triggers, two thumb buttons and a touch wheel on top.

The Rift S uses new controllers with side grips, triggers, two thumb buttons, a menu button and an analog stick. These buttons are capacitive as well, so the Rift S will detect when your thumb is resting on them even if they aren’t depressed.

The Valve Index controllers go much further. For one thing, they use straps that hold them to your hands, so you don’t need to hold grip them to keep them in your hands. The also have triggers, two thumb buttons, a system button, a vertical touchpad for thumbs, an analog stick, and grip sensors. The combination of buttons, sensors, and pressure sensitivity allows for the controller to track each finger independently for more realistic and nuanced recreation of your hands in VR. 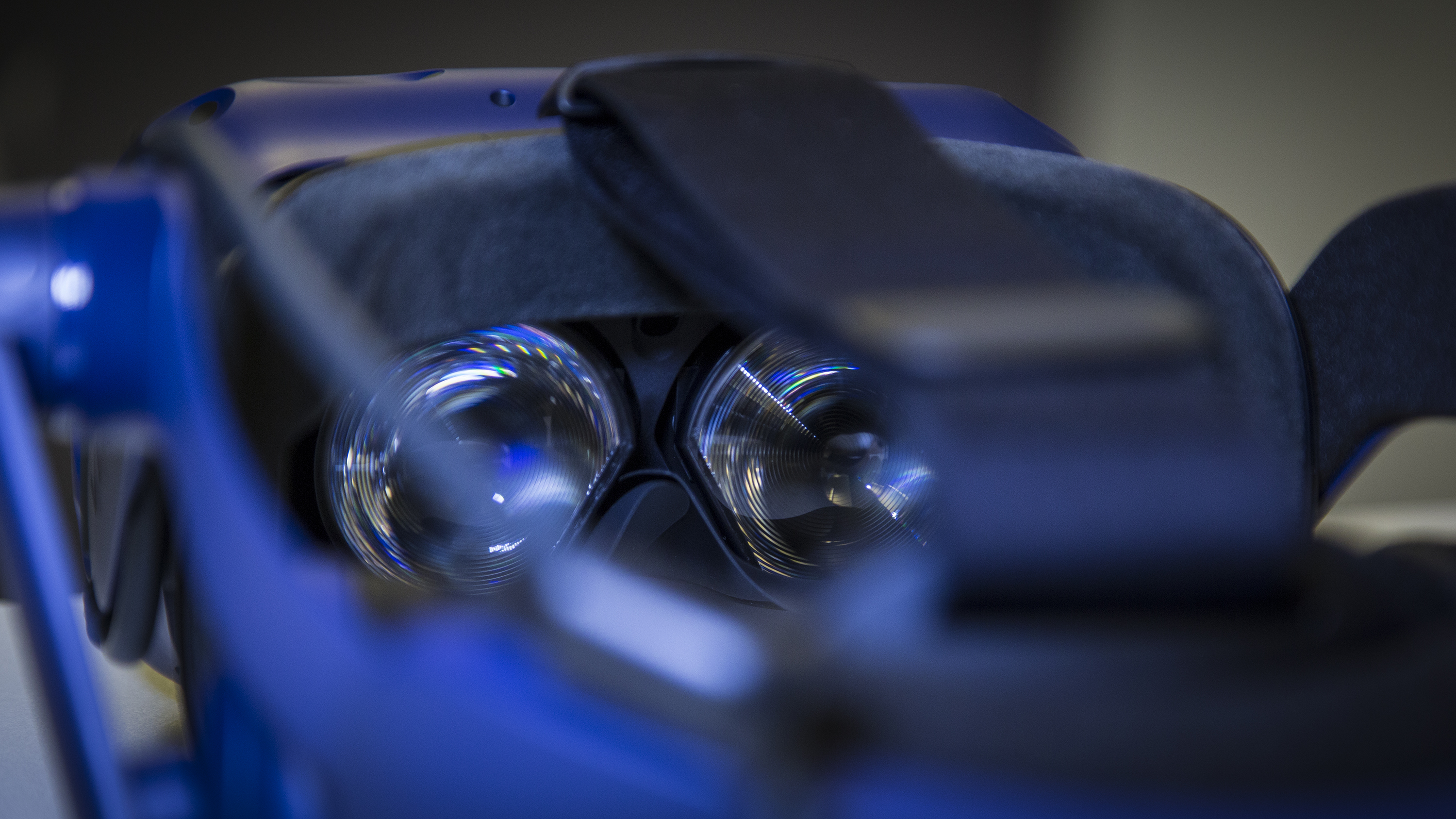 The Oculus Rift S really sets itself apart on price. At $399 (around £300, AU$550), it’s the cheapest by far, and that price includes the headset, controllers, and everything else needed to use the Rift S. The Rift S also has easy access to the Oculus’s list of exclusive games (though other headsets can access many of these games through workarounds). For ease of access to VR, this is definitely the winner, especially considering it doesn’t demand as much from a PC to run.

You can save a bit of money on the HTC Vive Pro or Valve Index if you already have some other VR hardware, though. Both headsets can use each other’s controllers and tracking base stations. So, for example, if you have Vive base stations and controllers, you can simply buy the Index headset and get full functionality.

Still, both devices are more expensive, and with their higher-resolution, high-refresh-rate displays, they’ll also require more powerful (read: expensive) PCs to run them.

So which one is right for you?

Without holding the Valve Index in our hands and playing some games with it, it’s tough to say for certain which high-end headset will win the day. We certainly like the more affordable price of the Oculus Rift S as well as the way it tracks your movement without the use of any external base stations but its specs leave something to be desired.

That said, if you want the most premium VR package, the Valve Index is worth waiting for – its controllers add another layer of immersion to VR and it has a higher field-of-view, a really important specification when it comes to VR gaming.

Last but not least, the HTC Vive Pro might make the most sense for creatives and VR arcade owners thanks to its high-res screen and compatibility with third-party hardware – however, it could be obsolete after the Valve Index arrives later this year. For now, though, it’s a tried-and-true gaming headset that’s a significant step up from the original Oculus Rift and HTC Vive.

Overall, we have high hopes that the Valve Index will be everything the company promised years ago when it said it was working on virtual reality, and it could be the game-changing hardware the PC needs to catch up with PlayStation VR.