Music is pounding. Neon lights are flashing all around me. I duck, dodge, and side-step, my hands lash out in every direction. But this isn’t some new martial arts fitness craze or a high-energy spin class. It’s a VR game called Beat Saber that I’m playing on the Oculus Quest headset. I’m working out in VR – and it’s fun.

Launched in May 2018, Beat Saber has quickly become one of the most popular VR games.

In March 2019, UploadVR reported that Beat Saber had officially sold one million copies, it’s garnered a huge online following and has even been featured on The Tonight Show with Jimmy Fallon – if you’ve ever wondered how good Brie Larson is at wielding a saber, click the link to find out.

Beat Saber: a dance machine from the future

The premise of Beat Saber is simple. You have two ‘sabers’, which it feels like you’re really holding thanks to the motion controllers that come with VR headsets. You use these sabers to rhythmically slice boxes that fly toward you, in sequences of varying heights, widths and sequential complexities – think of it as like one of those dance machines you see at seafront arcades, but from the future. 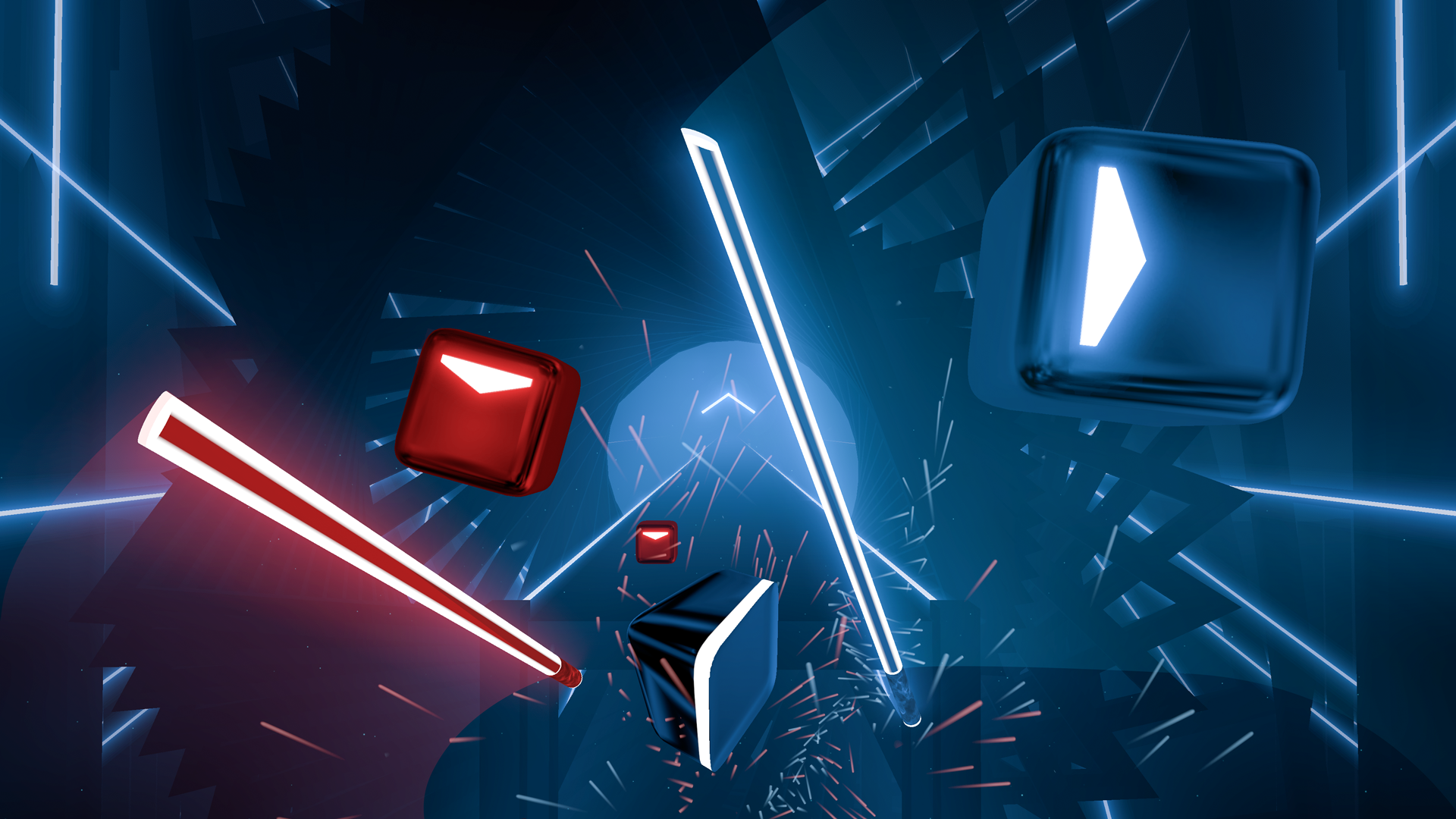 Beat Saber: the boxes fly toward you so you need to make sure you hit them in the direction of the arrows.

It’s not hard to see why Beat Saber’s fast-paced style of fun, colorful and futuristic gaming is not only hugely popular, but a good way to get moving.

“People are sharing with us their pictures before and after they started playing Beat Saber and results are insane – many people have lost more than 20-30 pounds since the game released.”

Although Beat Saber has become a fun way to work out, that wasn’t the original aim. “To be honest, the game wasn’t created with a fitness intention. Jan, the Lead Developer of Beat Saber, simply wanted to create a new rhythm game which was fun to play,” Dvorak explains.

However, soon after the game was launched people wrote to the team to tell them it was already helping them to feel fitter and lose weight. The transformation stories are impressive, but what Beat Saber seems to do the best is make fitness fun. 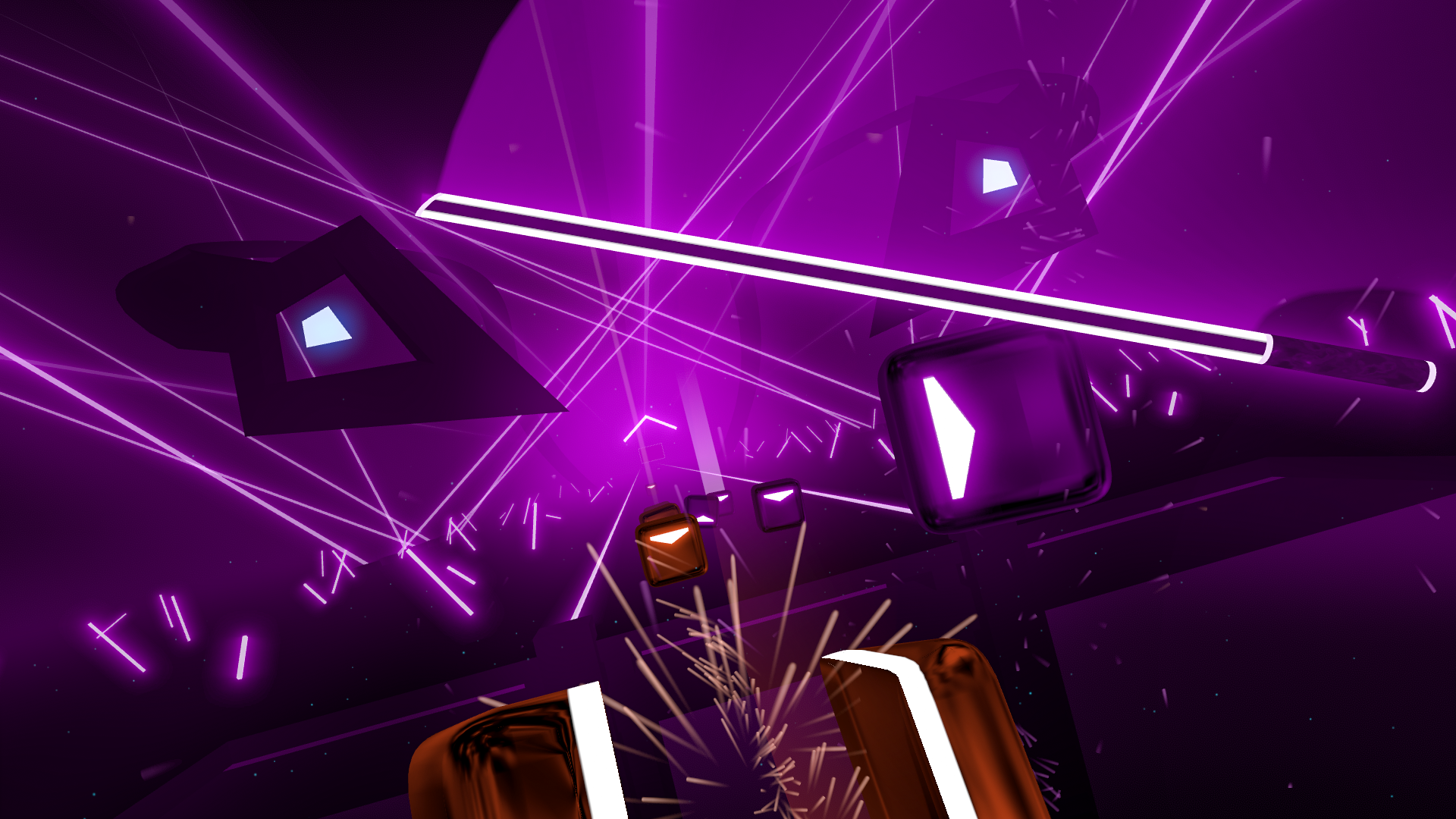 You can play different levels of difficulty with different music tracks and different colours.

“We began to fully realise the fitness potential of Beat Saber soon after the release when players started to post pictures with their sweaty faces and comments like these: ‘Hey Beat Saber team, your game tricked me into working out! How dare you!” Dvorak tells us.

“People who were never too much into working out found out they can create a healthy daily routine with Beat Saber,” Dvorak says. It’s easy to see why VR fitness games appeal to those who may be put off by gyms or fitness classes – you can participate from the comfort of your own home, go at your own pace and there’s no judgement.

For these same reasons, Dvorak explains that Beat Saber has also become popular among people who are slowly trying to overcome injuries or health problems.

Box VR is another physically-focused VR game, but unlike Beat Saber, it was created with fitness very much in mind and offers workouts designed by fitness instructors. When you begin the game, you see cues travelling towards you that you ‘hit’ in a number of different ways, whether that’s with hooks, crosses, jabs and uppercuts – there’s also options to add squats and dodges too.

The team at BoxVR shared similar stories. “We’ve heard of some pretty remarkable results from people using BoxVR to get fit and lose weight, ” Sameer Baroova, Co-Founder of FitXR, the creator of BoxVR tells us. “People say how much fun they are having and this is what’s great about VR, immersion helps you get into a state of flow and before you realize it you’ve just done a 30 minute workout.” 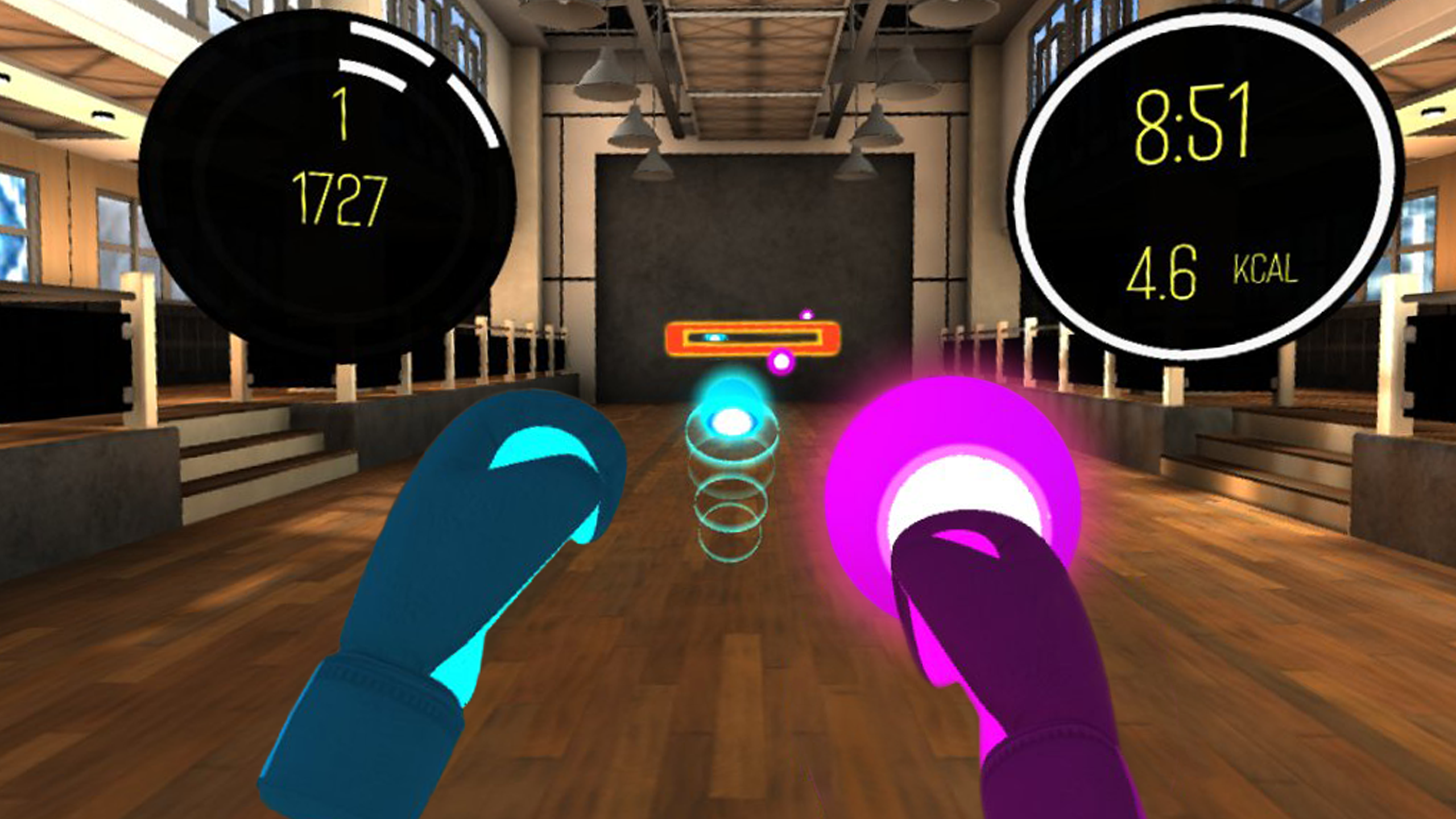 BoxVR. Gloves up! Different visual cues fly toward you and you need to make sure you punch, squat and duck.

Baroova tells us about a player called Sims Odom who had stopped exercising after heart surgery and contacted the team with some great news.

“In the first six weeks I lost 15 pounds and went from a tight-fitting 38 waist to a loose 36!” Sims told the BoxVR team in an interview. “Better yet, I haven’t had a heart palpitation since I started playing BoxVR – they’re literally gone. My muscles are more toned, I feel less irritable, and the mental fog has lifted.”

BoxVR also appeals to those who may be put off by traditional fitness venues, but who want a fun way to work out from home. “What’s equally rewarding for us is when we hear of people who have previously not exercised before or who have previously found exercising a chore who have discovered BoxVR and are now using it regularly to help keep in shape,” Baroova tells us.

How to stay safe during VR workouts

One of the most obvious considerations when it comes to VR fitness is staying safe. VR is a new medium for many people and, because of that, there are different dangers to bear in mind – the main one being your senses are immersed in the virtual environment and not the real one.

“We want to make sure people will have enough space around them when playing,” Dvorak tells us. “But also, they need to approach playing as a form of high physical activity and act like they are working out – stretch muscles, drink enough water, rest regularly. It is very important to keep this in mind.”

Beat Saber and BoxVR both show users health and safety warnings before playing, which we’d always recommend you read. But there’s only so much developers can do – you need to consider how you use VR in your home.

For example, you need to make sure you have enough space, remove obstacles, be careful when you take a headset off and ensure you’ve stretched beforehand so you don’t pull a muscle or hurt yourself when you have lots of Beat Saber boxes whizzing at your face. 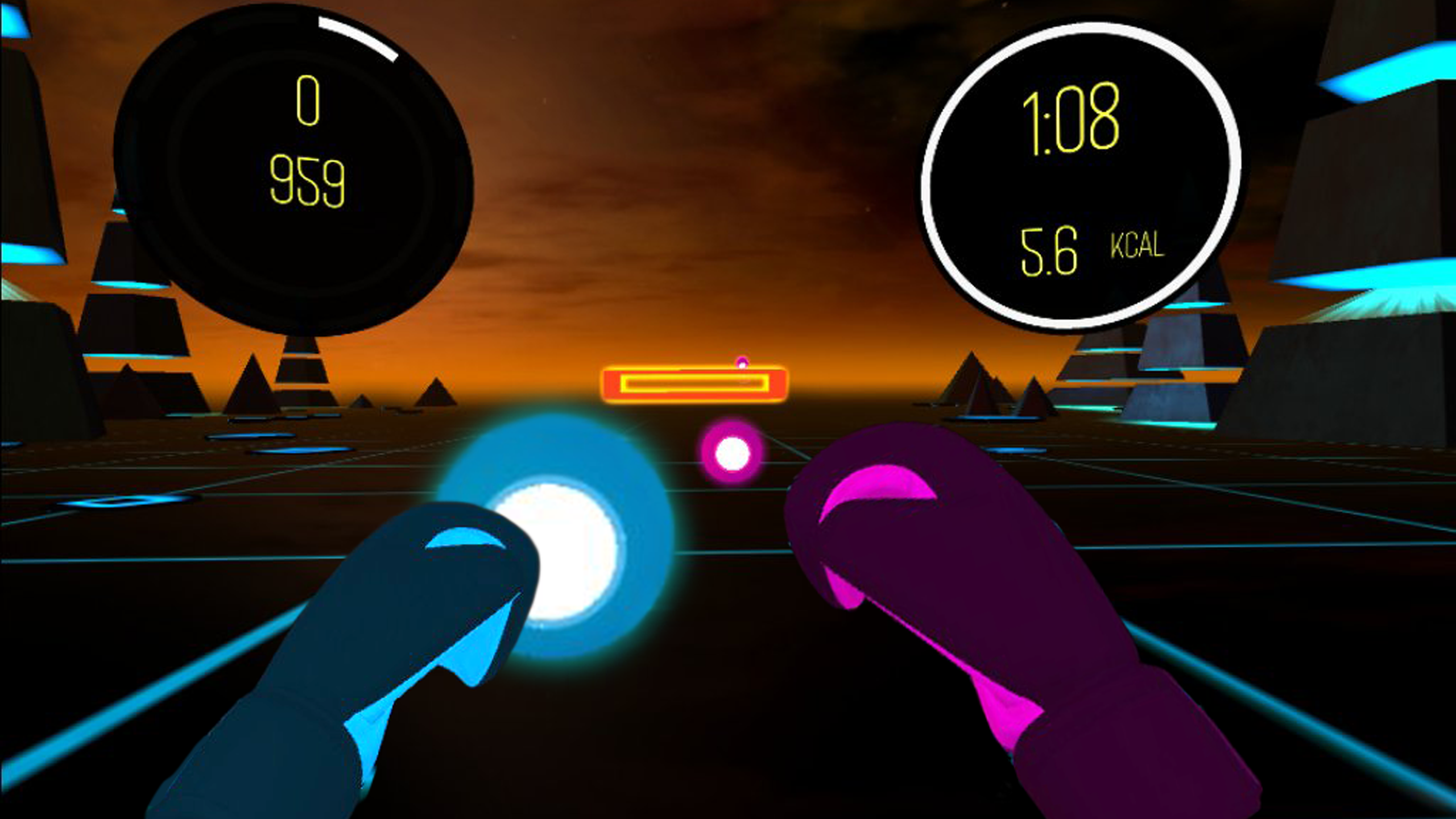 Different levels within BoxVR have different environments – check out the calorie counter in case losing weight is your main goal.

The future of VR-powered fitness

Using VR technology to power workouts isn’t new. A number of high-end fitness companies have already integrated VR headsets into their offerings. One of the most recent comes from BlackBox VR, a VR gym concept that would require you to go to a boutique gym venue and use VR headsets when you get there to shake-up your exercise routine.

However, the appeal of games like Beat Saber and BoxVR is that anyone with a VR headset can play them from their own home. This is appealing for lots of reasons, whether you’re recovering from an injury, feel anxious at a gym or just don’t have enough time to get to a fitness class.

It’s also even more accessible now that VR headsets are becoming a little cheaper, require less equipment and offer more mobile experiences. Both Beat Saber and BoxVR told us that designing for the Oculus Quest, which was launched in May 2019, has given them even more creative freedom.

“The Oculus Quest is ideal in that it’s the first untethered device and I think we’ll see more of these over time,” Baroova tells us. “VR headsets will also become even smaller, lighter and more portable, like the Quest, which of course will benefit fitness games.”

What does the future of VR fitness hold? Beat Games hopes to add more fitness features to future versions of the game now the team knows how important that element has become, including a burned calories counter, a special fitness music pack or even a collaboration with a fitness tracker company. 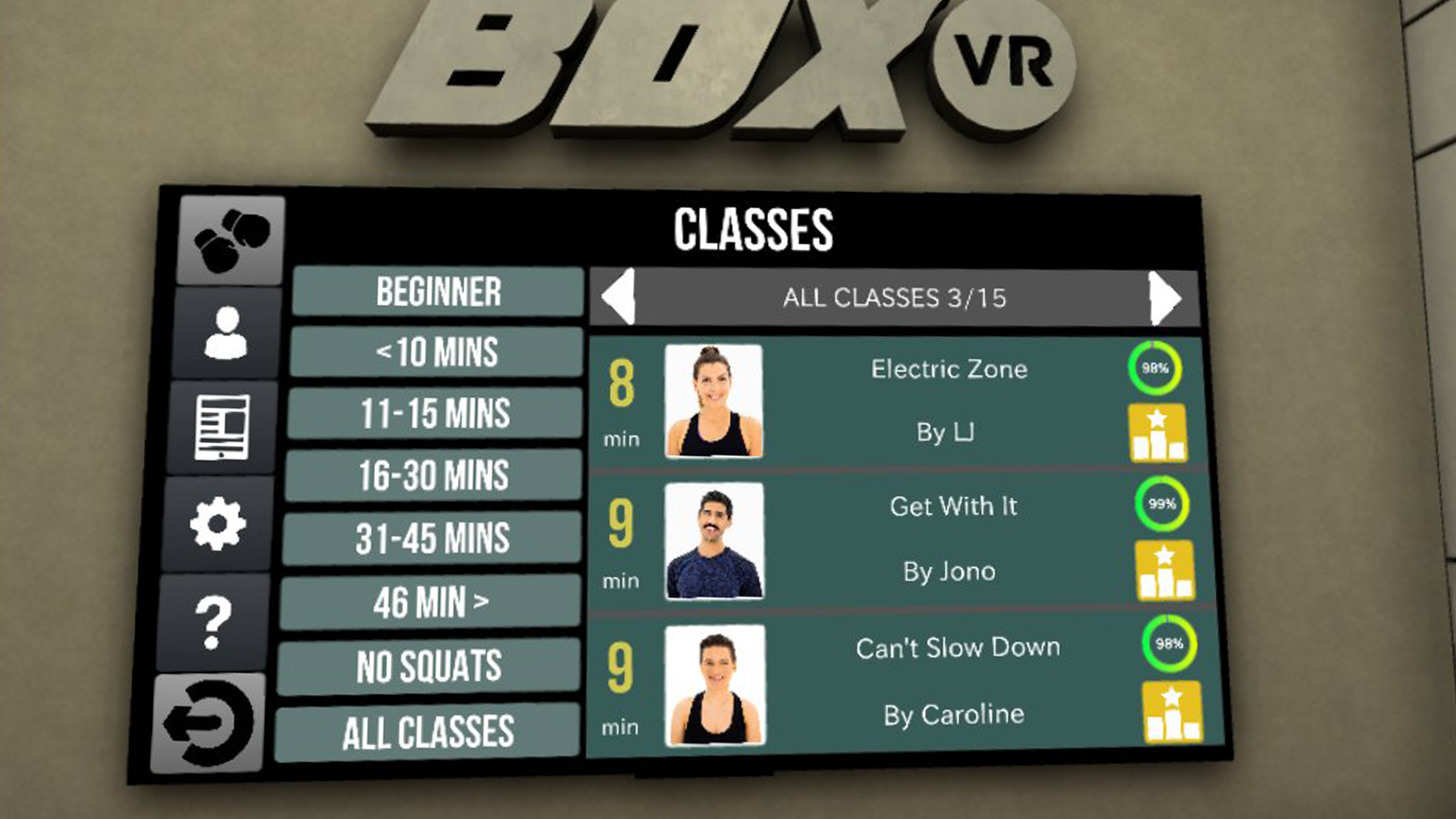 The BoxVR home screen already features a wide selection of classes – in the future, there’ll be more, and not just boxing classes.

Similarly, Baroova tells us that the option to sync with fitness trackers may soon come to BoxVR, as well as more integration with instructors, different exercises and the option to add weights to your workouts to make them more challenging.

“The only problem on our end is time, we have too many ideas but the team is very busy,” Dvorak says.

“We get messages from people sending us tips for new fitness features or requesting their favorite fitness tracks for the game. This is a developer’s dream. Create a game which has such a huge impact on people’s lives all around the world.”