Intel has a strategy to fight back against AMD, and rumor has it that the chip giant’s tactics will be pretty simple – it intends to throw money at pushing Core and Xeon processors, and a ton of it: $3 billion (around £2.4 billion, AU$4.4 billion), the speculation suggests.

We should heavily underline that it’s one of the sketchier entries in the rumor category, coming from AdoredTV, who was apparently emailed a leaked slide from a recent Intel sales meeting.

It’s clear that Intel is under great pressure from AMD on the processor front – losing heavily to Ryzen 3000 in the desktop arena, and worse still, facing a threat from Epyc in data center territory – and the leaked slide holds that Intel’s advantage is “financial horsepower”. 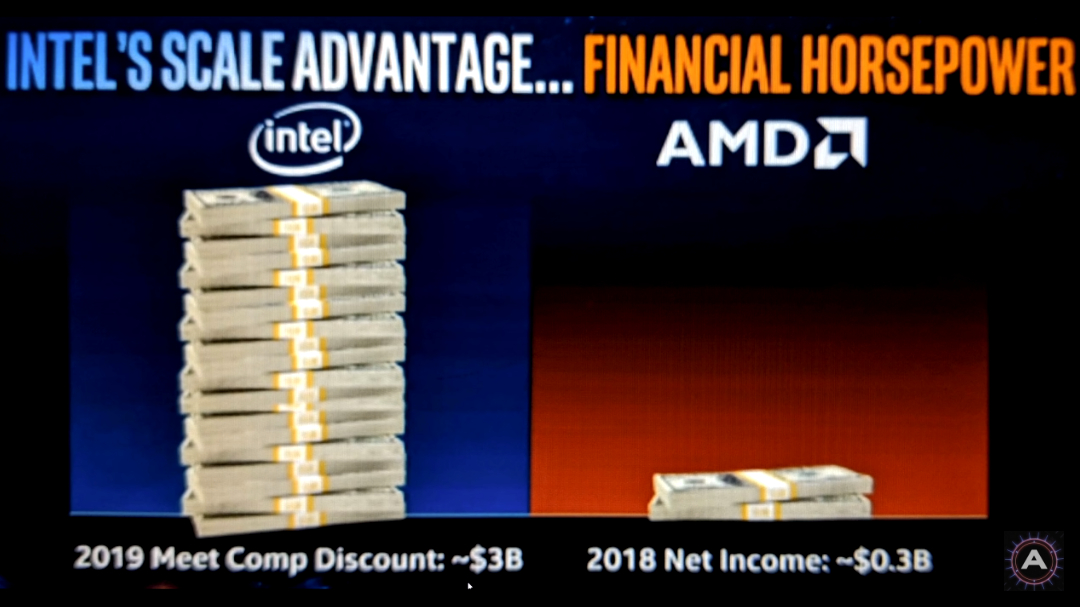 Specifically, the slide claims Intel has a ‘2019 Meet Comp Discount’ (the amount of money it’s able to spend to disrupt competition) of $3 billion, which is 10 times the net profit AMD made in 2018.

Of course, we have to tread very carefully here because that slide could be faked, but it isn’t a massive leap to imagine that Intel has a raft of further price-cutting measures that it can use to fight AMD, given that we’ve already seen some evidence of this.

At the other end of the scale, certain popular budget processors from Intel have also just had a (much smaller-scale) price cut.

So are we about to see further cuts being made left, right and center, and maybe even far more competitive pricing for Intel’s next-gen Comet Lake processors for desktops (which are being powered up with hyper-threading, even at the low-end)?

Possibly so, but what’s ruffling feathers here is that Intel is directing its coffers into simply outmuscling AMD financially, rather than putting these wedges of cash into research to actually power-up its processors and make them more competitive chips with the likes of Ryzen and Epyc. Of course, the latter would take time and entails a whole different world of complexity, whereas throwing money at the problem is an immediate and (relatively) simple solution…

As AdoredTV points out in his video, Intel has massively deep pockets, and it could easily afford far more than $3 billion to shore up its CPU sales, if that’s what was required (last year Intel made a profit to the tune of $21 billion – around £17 billion, AU$31 billion).

However, even if it makes sense in some respects, we have to treat this rumor with extreme caution, because as we’ve already noted, there’s no telling whether that slide is genuine or not.

Intel may be looking to combine the effect of price cuts – which it is definitely making in some measure, as we’ve mentioned – with any strain on stock that AMD may experience, because the latter is another potentially key factor in how the CPU wars will play out.

We’ve already seen Ryzen chips struggling to meet demand at the high-end, and with rumors flying around of 7nm shortages – issues compounded by the popularity of the iPhone 11 – Intel may be hoping to land a telling double blow on pricing and supply here.

Although ultimately, at least in the short-term, downward pressure on the prices of CPUs will be no bad thing for consumers, of course. The long-term competitiveness of the processor market might be another matter, though, if AMD begins to get outmuscled in this kind of fashion.