It’s in your best interest to invest in one of the best gaming keyboards, especially if you’re serious about gaming and especially when you’ve just dropped a bunch of cash on a new gaming PC. Trust us; you’ll need the best gaming peripherals to back you up.

Plus, you’ll be happy to know that if you don’t have a large budget, there’s an excellent gaming keyboard for you on this list. If money isn’t an issue, there are also a ton of feature-rich keyboards on it that boasts all the bells and whistles. 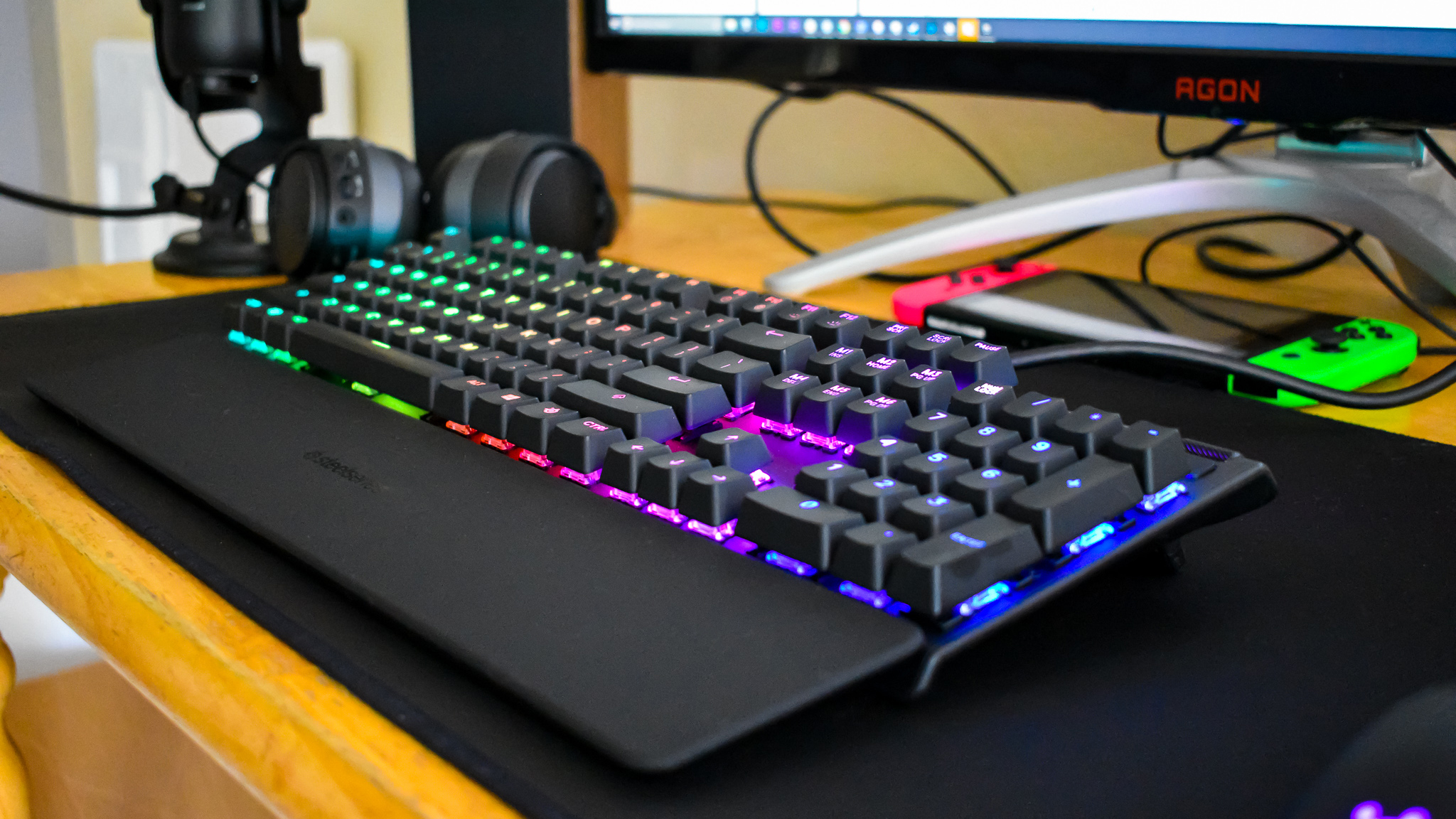 The SteelSeries Apex Pro’s svelte aesthetic and clever OLED display are just the appetizers. The SteelSeries Apex Pro gets our coveted 5-star rating for many reasons, the biggest of which are its stunning and solid build, custom actuation and comfortable – not to mention, quiet – magnetic switches. Performance-wise, it’s among the best gaming keyboards we’ve tested yet, which makes its $high price tag worth the splurge. 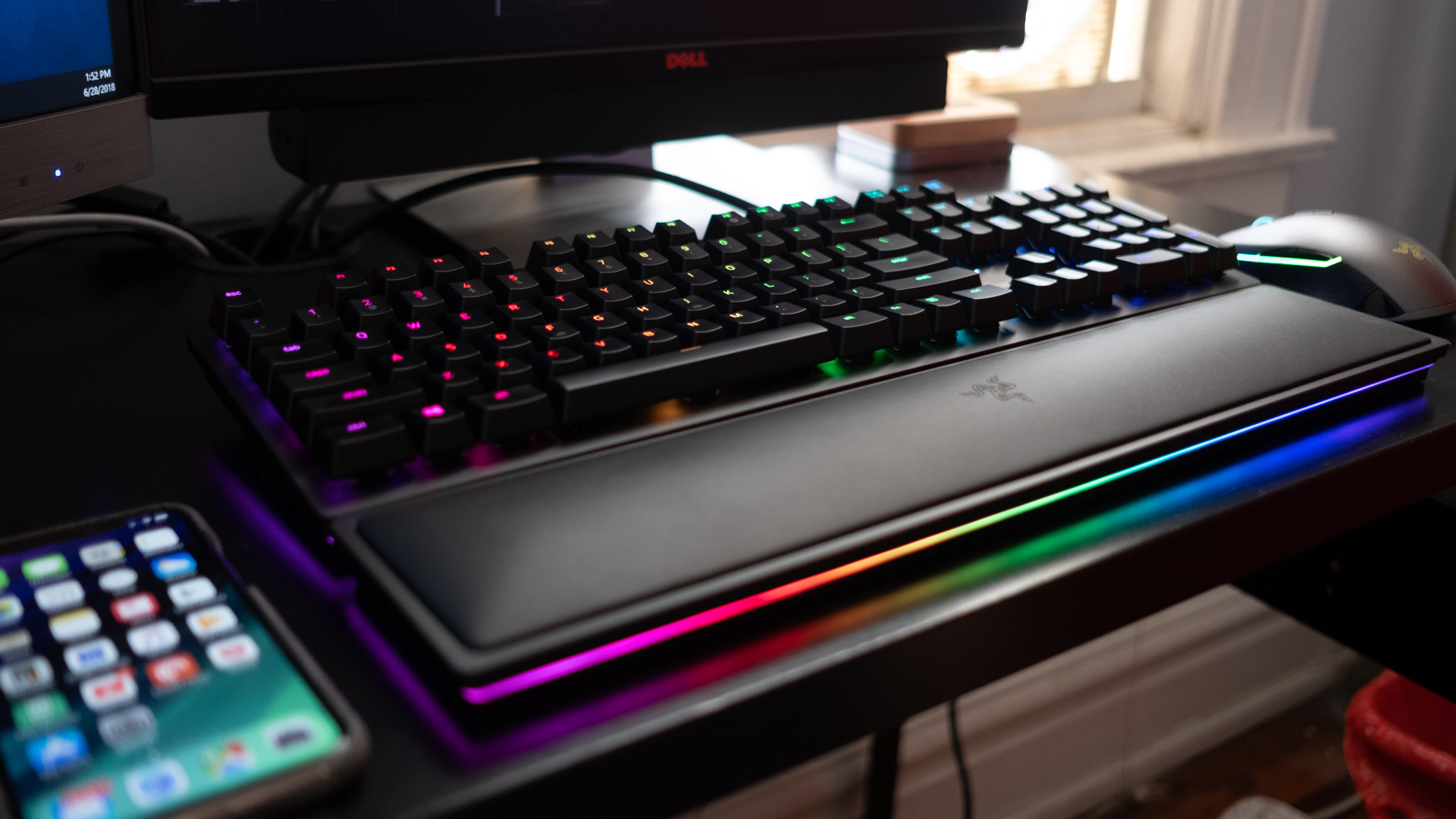 If you have the need for speed, then the Huntsman Elite is your best bet, thanks to its new optomechanical switches. That sounds like a mouthful, but essentially, it means that Razer has managed to combine mechanical switches with optical sensors. This unthinkable allows the Huntsman Elite to take its actuation to the next level, and you would be hard-pressed to find a faster keyboard on the market. Switches aside, it’s also remarkably comfortable to type on. Plus, it’s covered with more RGB lighting than you can shake a stick at. Sure, it needs two USB cables for power and costs a small fortune, but with tech like this, it’s absolutely worth it. 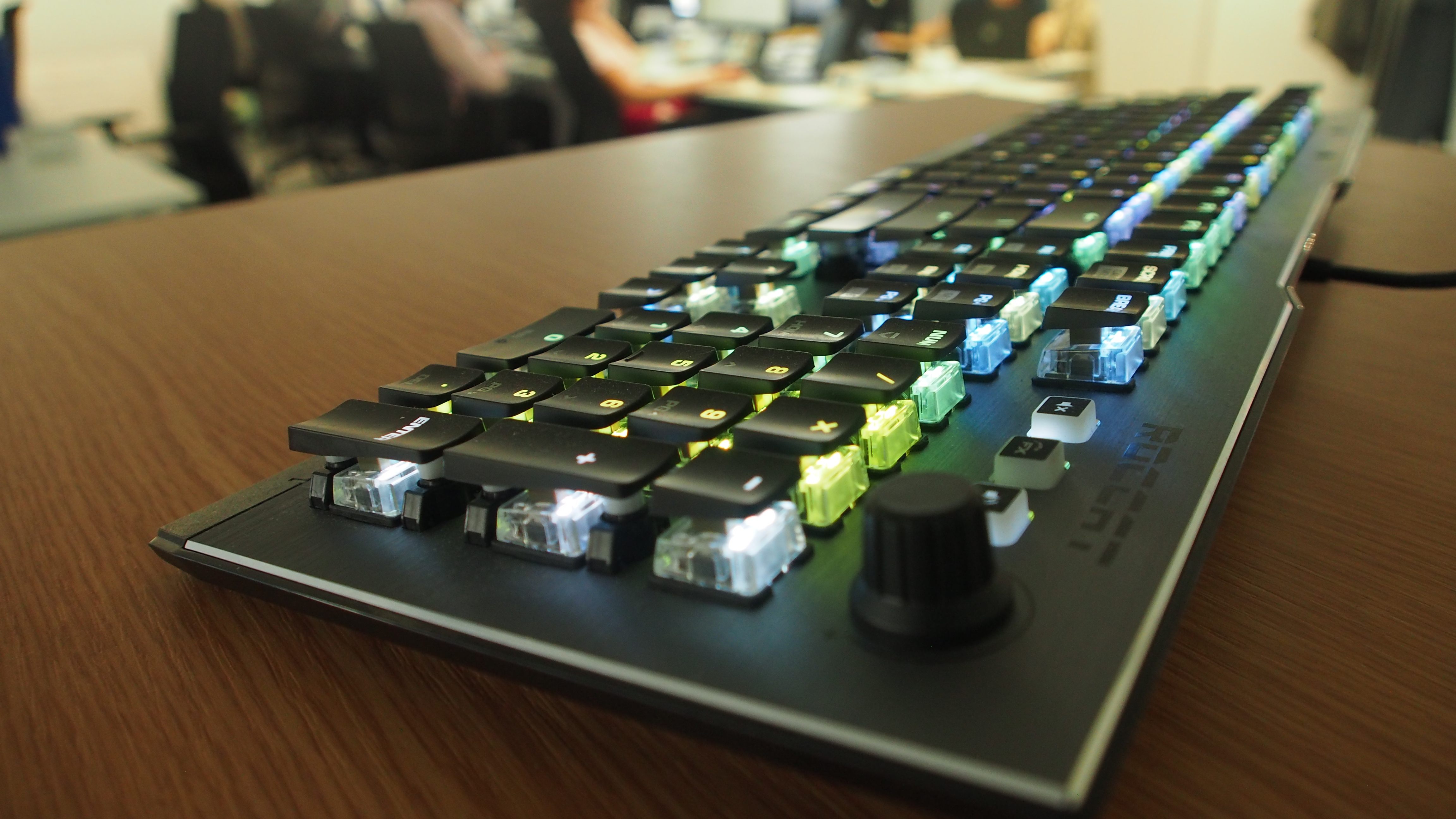 The Roccat Vulcan 120 should be at the top of your gaming keyboard wish list, if you want one that looks and feels good. This svelte keyboard uses Roccat’s own Titan switches, rather than the Cherry MX switches found on most other keyboards on this list, and we can vouch for how superb they are. This gaming keyboard combines amazing tactile feedback with quiet and comfort. It really isn’t hard to see why this is one of the best gaming keyboards on the market today. 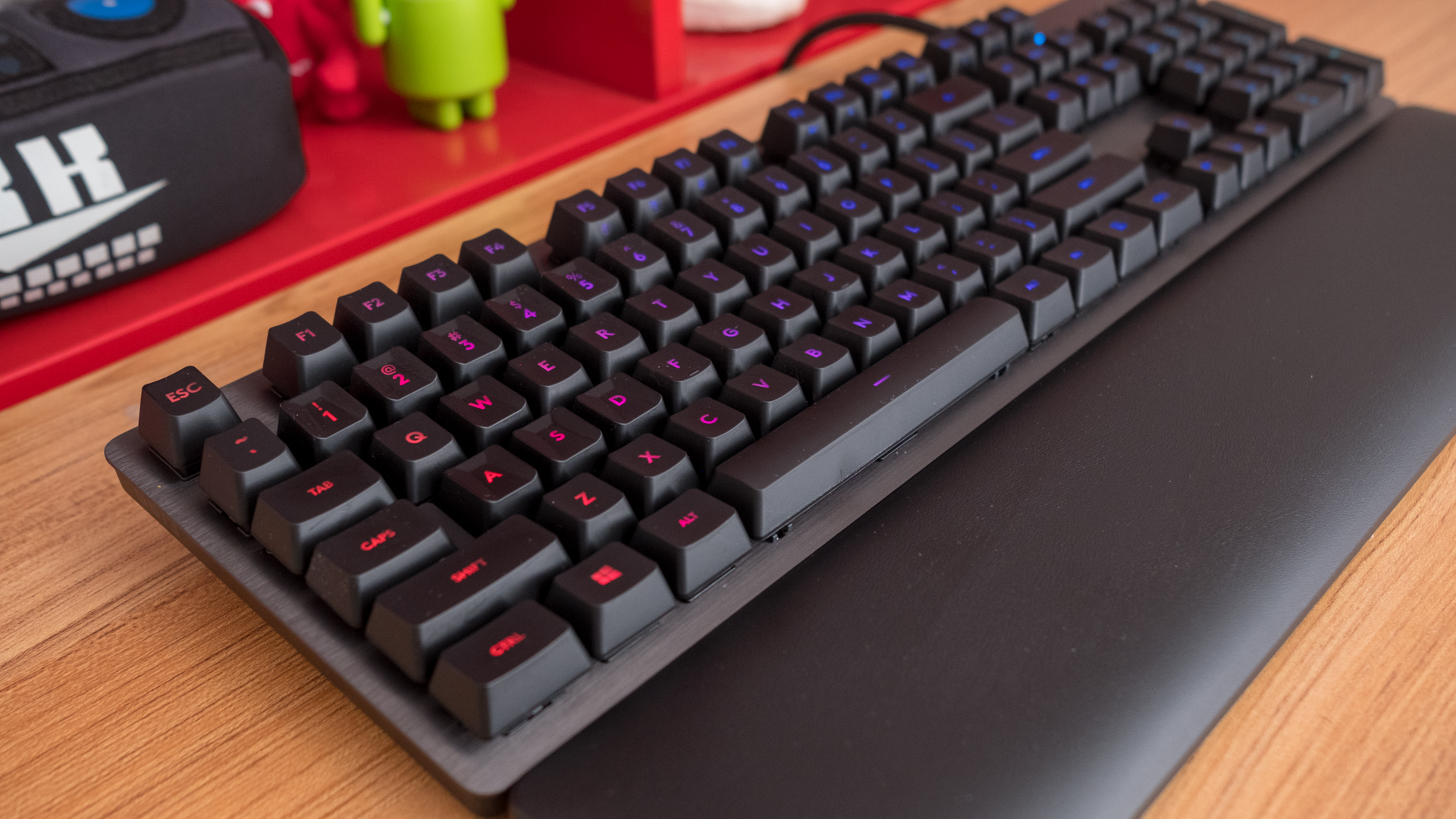 One of the biggest issues with Cherry MX Red keys is that even though they’re good for gaming, they’re not really ideal for typing anything other than your Steam credentials. That’s exactly why the Logitech G513 and its Romer-G Linear switches steal the show. With its brushed metal finish that is, miraculously, practically immune to fingerprints, it all adds up to one of the best gaming keyboards to date. 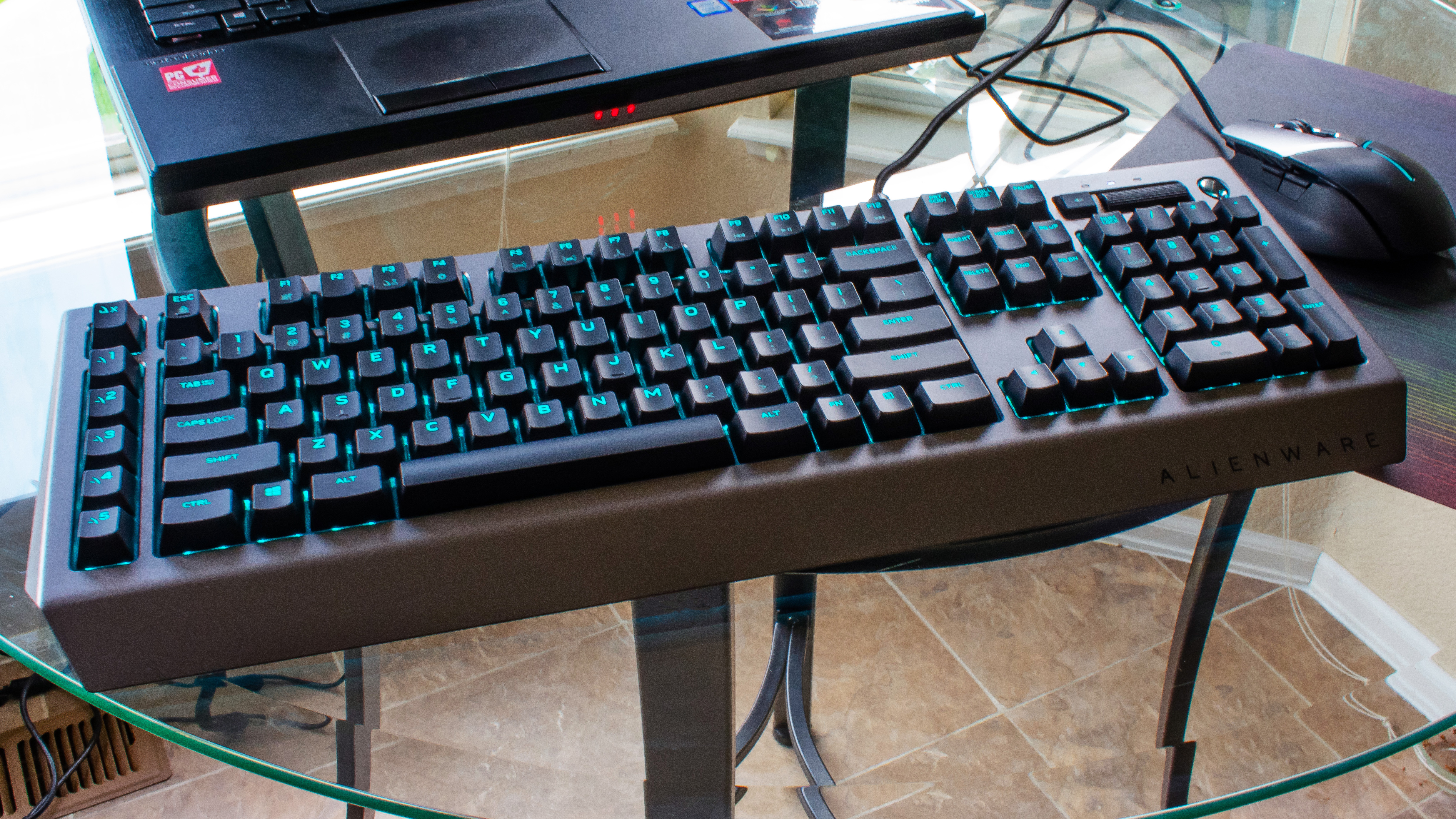 When you think Alienware, “value” isn’t the word that comes to mind. But, this time around, the Alienware Pro Gaming Keyboard AW768 is a genuinely great deal. At under 100 bucks or quid, you’re getting the toughest gaming keyboard fitted with mechanical keys, dedicated macro keys and slick aesthetics. It’s not the most feature rich keyboard in the game, but at this price, it really doesn’t need to be. One of the best gaming keyboards on the market right now, the Alienware Pro Gaming Keyboard AW768 gets the job done, and looks good while doing it. 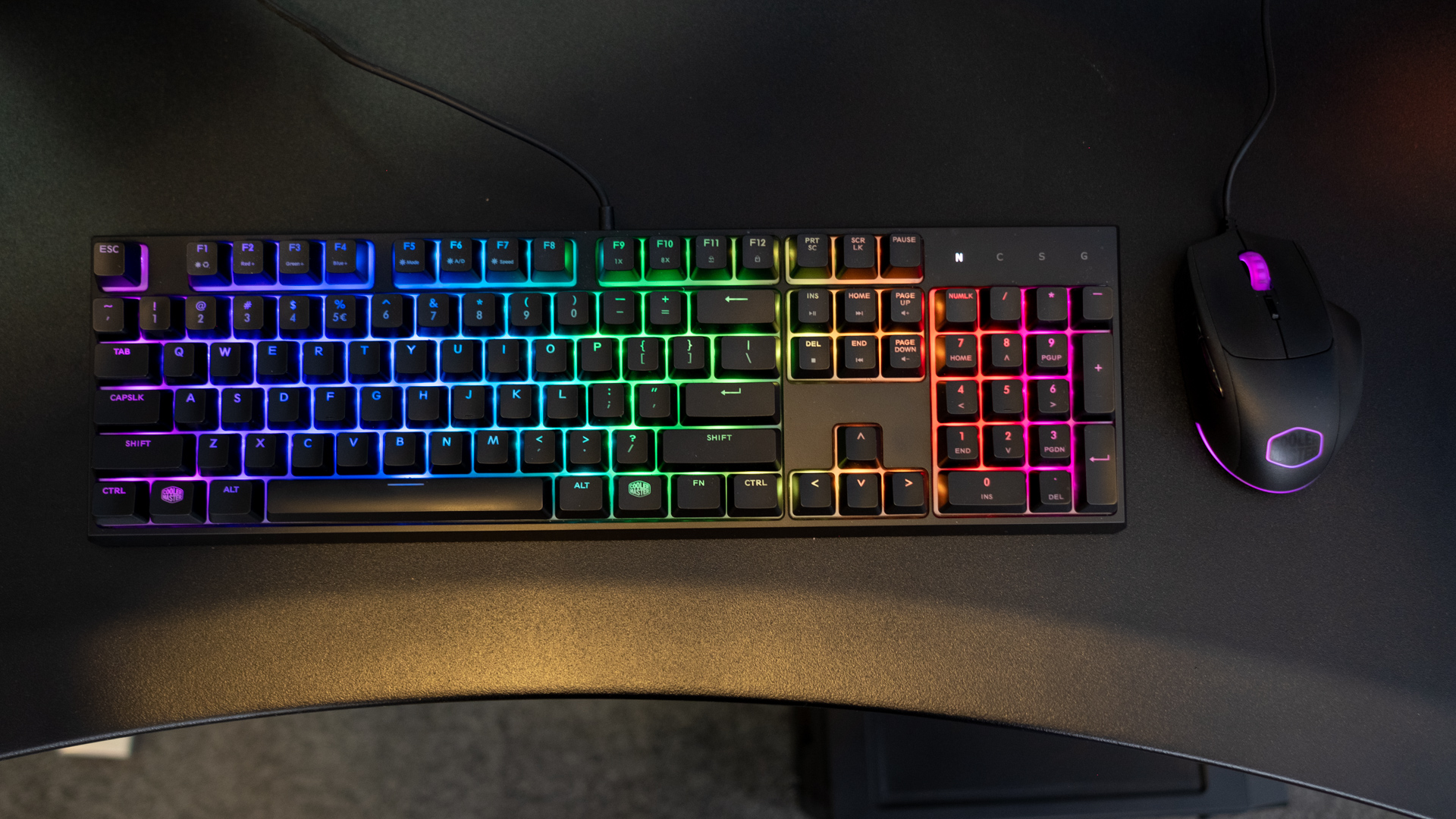 Not everything has to be super high-end to be good, and the Cooler Master MasterSet MS120 is the perfect example. Though this one’s a keyboard and mouse set, the keyboard is the star of the show. Sitting at just under a hundred bucks, the MasterSet’s keyboard is affordable while being up there with its more premium ‘mem-chanical’ competitors in terms of quality. The switches on offer bring a ton of tactile feedback and deep travel. It’s quiet as well, so you can furiously pounding away during an intense late-night Overwatch match without worry. The Cooler Master MasterSet MS120 is, without a doubt, one of the best gaming keyboards. 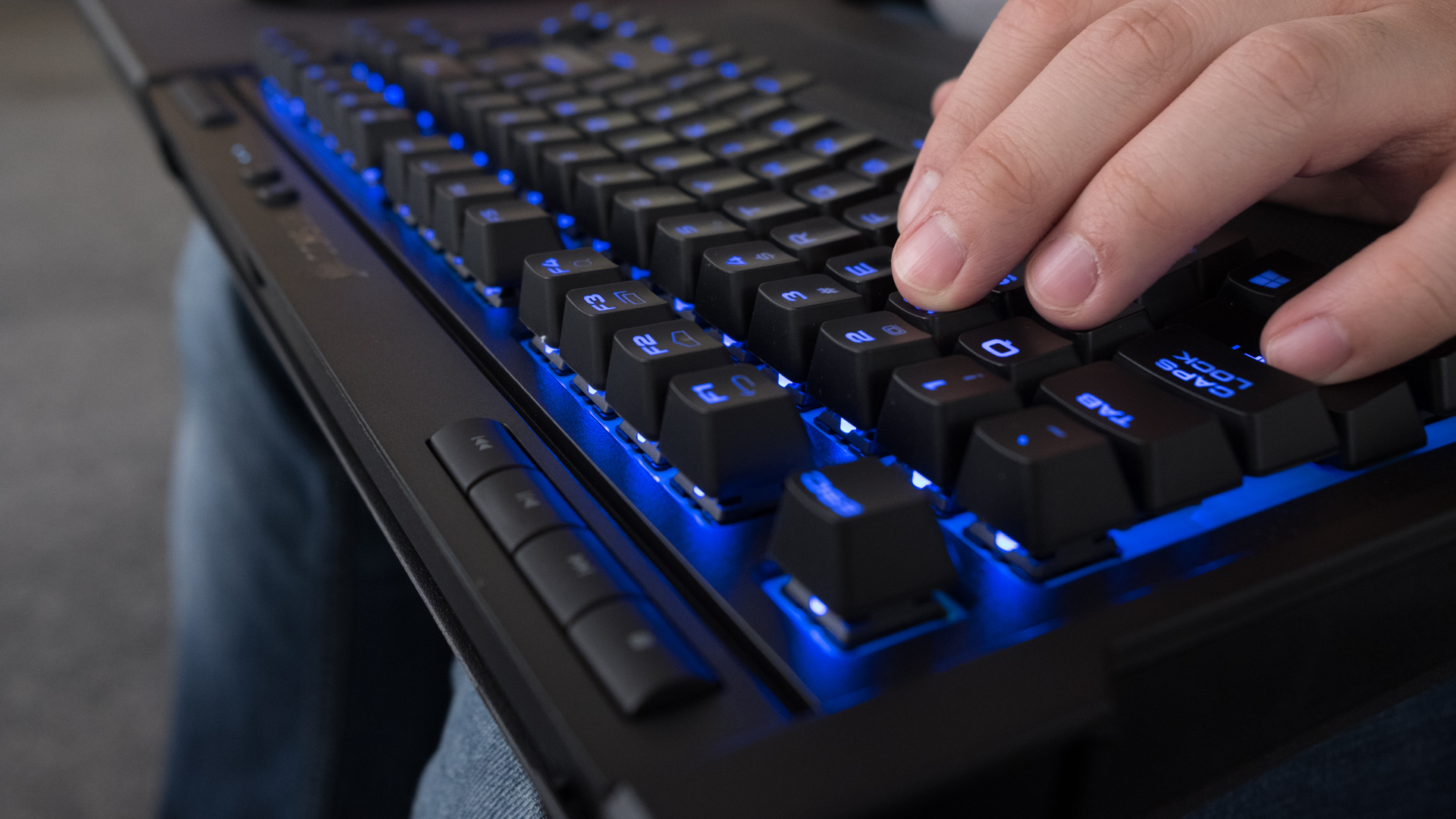 We have tested many wired gaming mice over the last few years, but we haven’t seen that many wireless gaming keyboards and even less that we actually liked. That is, until the Corsair K63 Wireless keyboard entered the scene. The computer peripherals company took what made the wired version of the K63 so great, and put it into a wireless version – without compromising on much at all. Packing tight Cherry MX Red switches, full RGB lighting and convenient media controls, the K63 wireless is proof that wireless keyboards can be very capable, even for gaming. 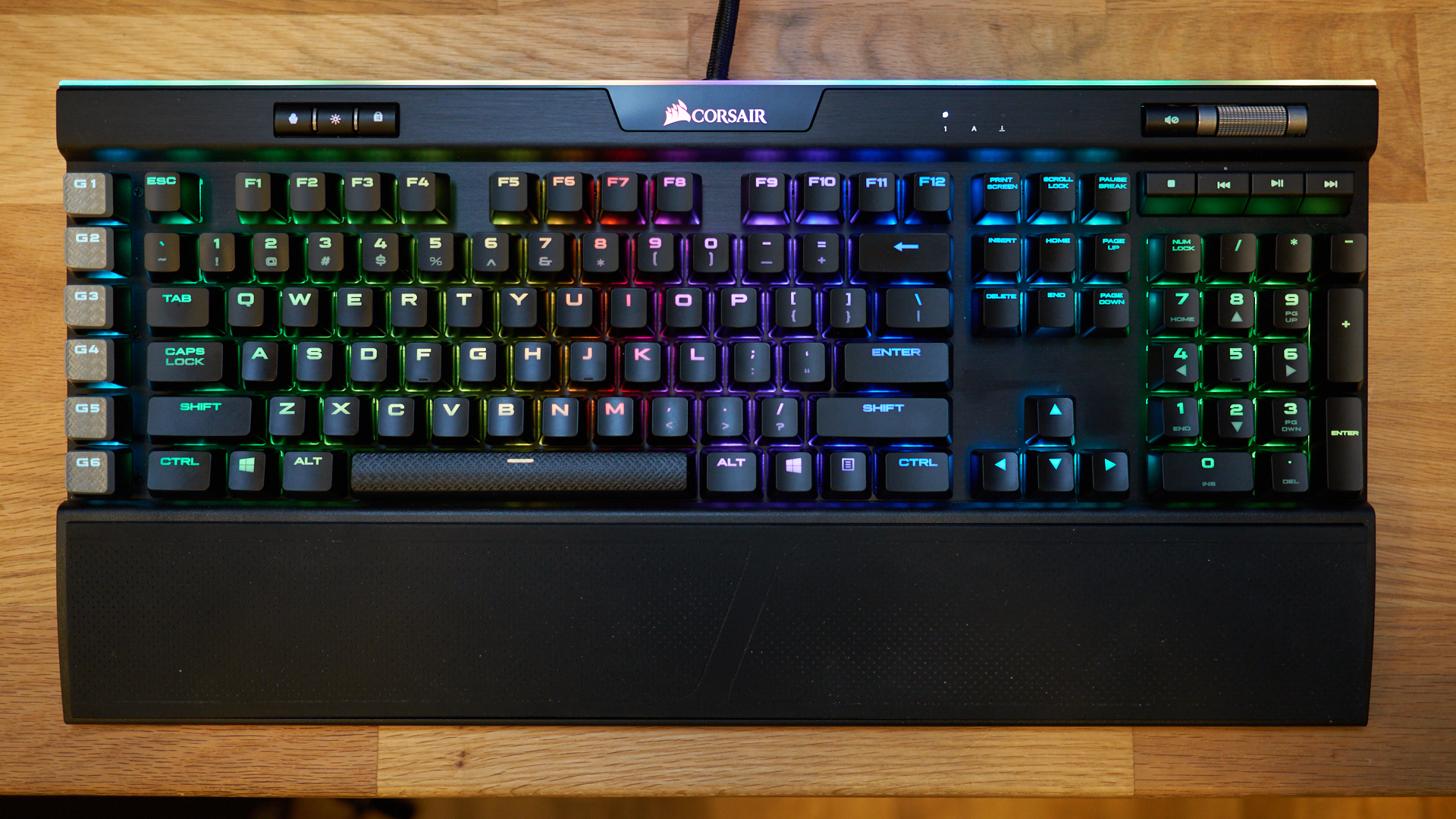 Sure, it comes with a high price tag, but the Corsair K95 RGB Platinum, one of the best gaming keyboards we’ve tested in the last year, really does give you a lot of ounce for your bounce. We’re not talking the more trivial bells and whistles like fancy RGB lighting either – although since we are on the subject, this one’s got a whole lot of them, not to mention its integrated 19-zone light bar and the 16.8 million color options, to boot. By bang, we actually mean its 6 dedicated macro keys, 8MB on-board storage and aircraft-grade anodized brushed aluminum frame. 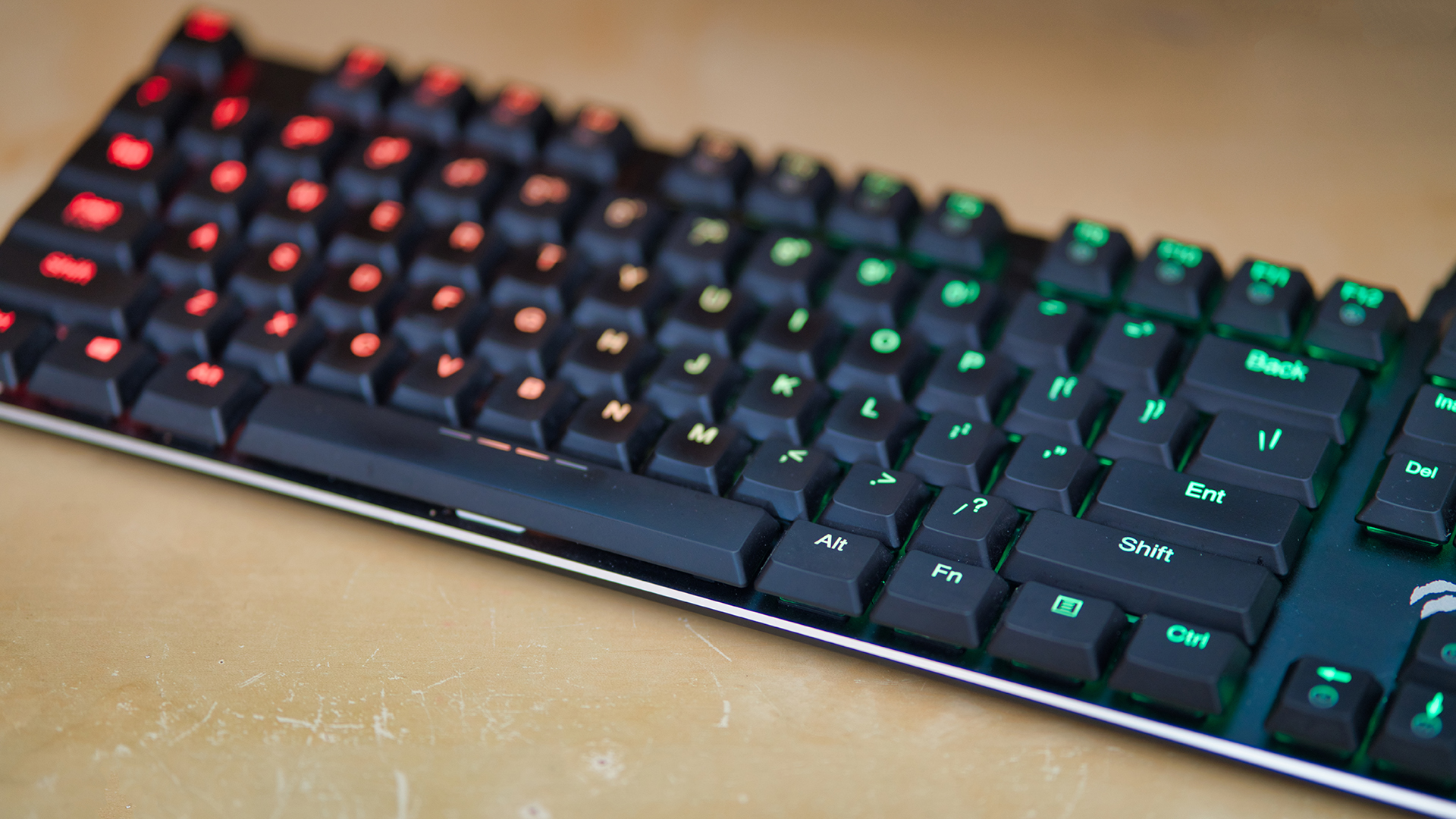 You might be thinking that if you’ve seen one of the best gaming keyboards, you’ve seen them all: big, garish hunks of metal with bright RGB lighting. Well, the Havit Low Profile Mechanical Keyboard will surprise you. While it definitely has the RGB lighting (honestly, how could it not?), it leaves the rest of the cliches in the past where they belong. Appealing and responsive, this keyboard is only as big as it needs to be, and is thus extremely comfortable to type as well as game on. There are no multimedia buttons, but we’d happily make that trade any day for a keyboard this good at such a low price. 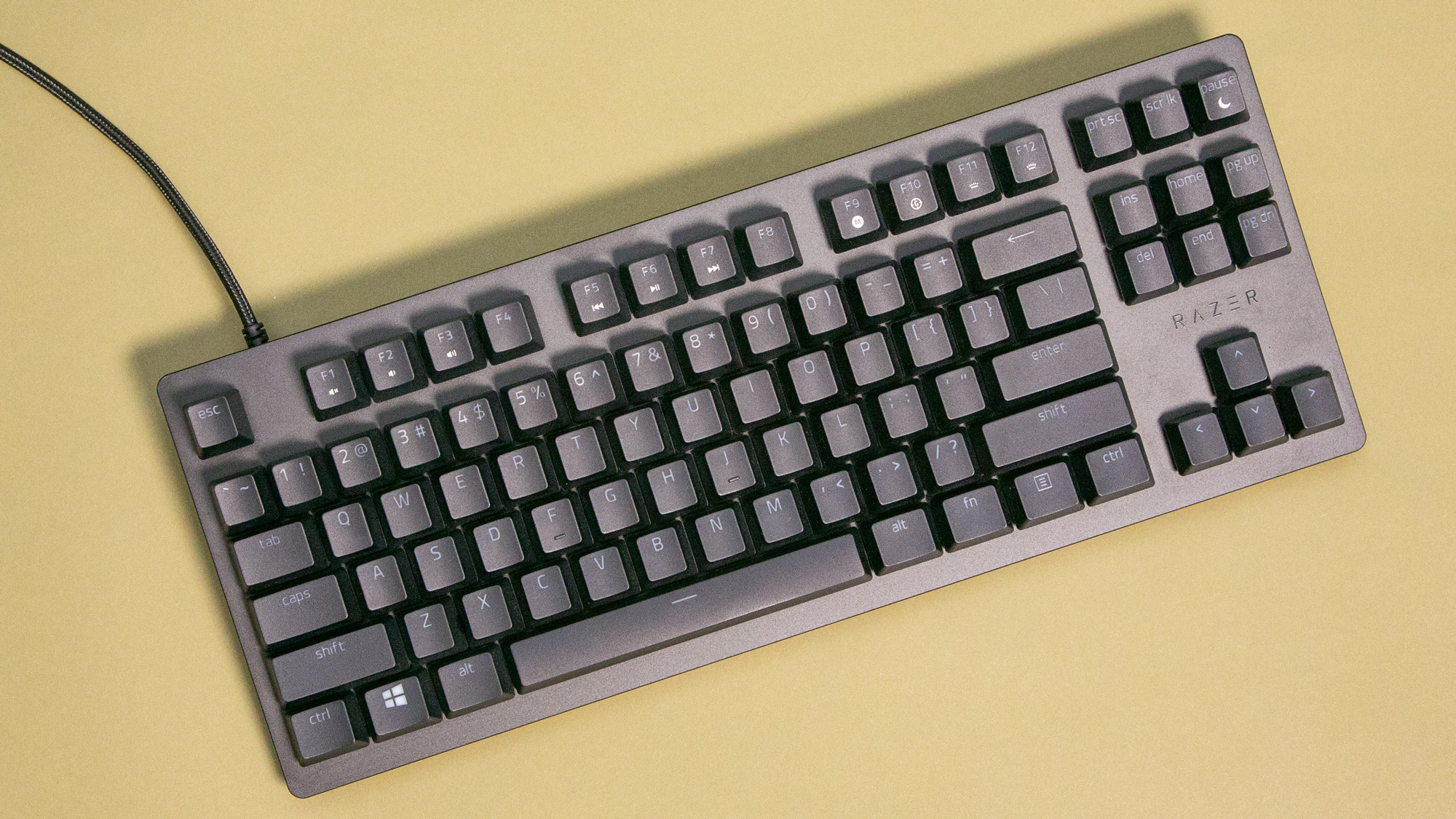 The beauty of Razer Huntsman Tournament Edition is that it manages to deliver fast performance without being the most expensive keyboard in town. True, there aren’t a lot of features here, which puts it behind many of its feature-rich rivals, but it makes up for that by being small and boasting a removable to make it perfectly portable for on-the-go gaming.