If you’re thinking of gaming mice, probably the first name that springs to mind is Razer. And for those seeking a mouse which is ideal for first-person shooters, bristling with a raft of customisation possibilities so you can fully tailor it exactly how you like, Razer makes a highly affordable option in the form of the Basilisk.

This well-respected stalwart of a gaming mouse is built around the same 5G optical sensor (with true 16,000 DPI sensitivity) as seen in Razer’s famous DeathAdder Elite. The Basilisk offers a tracking speed of up to 450-inches per second (IPS) and up to 50G acceleration.

It also comes with eight programmable buttons, and a fully ergonomic right-handed design, along with rubber side grips to help you stay more in control of the mouse when deep in fast-and-furious action in your favourite shooter. Razer’s Basilisk has mechanical mouse buttons which are rated for up to 50 million clicks, so there’s durability in spades here, too. 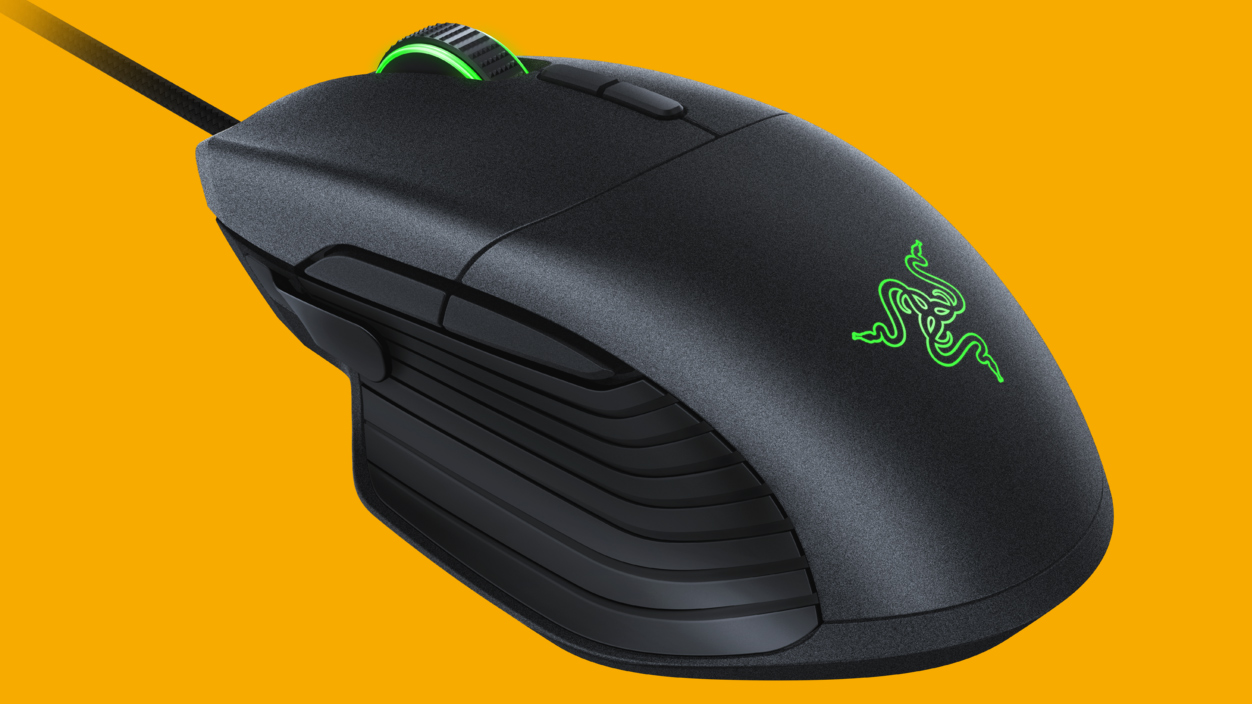 There are a couple of really nifty touches that truly set this mouse above its peers, though, the first being a tactile scroll wheel, the feel of which can be tailored exactly to your own preference. There’s a dial on the bottom of the mouse which can be adjusted to change the resistance of the scroll wheel, so it can be as heavy or light as you want.

And the jewel in the Basilisk’s crown is a removable DPI clutch. “A what now?”, you might well ask? Well, this is an innovative addition that’s essentially a side button which changes the mouse sensitivity when held down.

So that means when you’re sniping in a shooter, for example, you can hold down the clutch and benefit from a much lower sensitivity for fine-aiming. Then when you’re back to normal fighting action – after you’ve finished zooming in and dispatching that distant enemy – let go of the clutch, and your sensitivity returns to its normal level.

As the clutch is removable, you can switch between two different-sized buttons (one long, one short) according to your own personal preference. And it’s also possible to customise the function of the clutch, so it doesn’t have to change your sensitivity – it can do other things (like become a push-to-talk button, which could be very handy in team-based games). 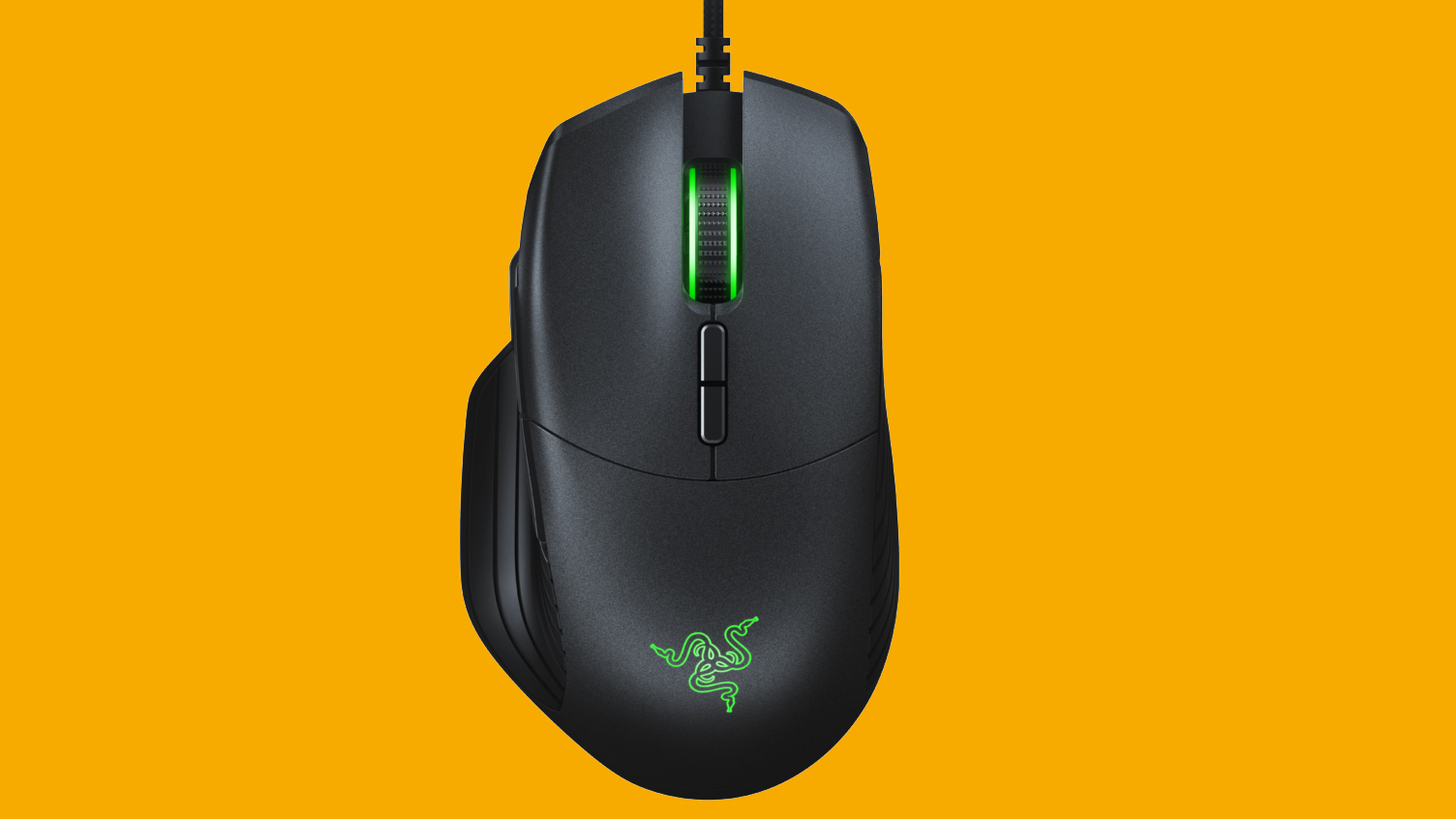 We can’t emphasise enough just how much difference the tension-adjustable scroll wheel and DPI clutch make in terms of being able to customise the Basilisk to your ideal gaming preferences. The other side- and top-mounted programmable buttons are also very well-positioned and designed with a satisfyingly weighted clicking action, to boot.

Finally, in terms of customising not just the feel and function, but the look of this mouse, there’s Razer Chroma lighting featuring 16.8 million different colour options. It’s also worth knowing that the on-board facilities of this mouse include the ability to store your user profile on the device (as well as in the cloud).

Furthermore, the Basilisk weighs 107g, so while it’s not the lightest gaming mouse ever made, it’s light enough, and has a great feel in the hand. That’s a boon for all gamers, of course, particularly those who might use lower sensitivities in shooters and therefore end up scooting the mouse around a lot as they turn (because a lighter mouse is easier to handle in this respect).

So you’re getting a decently light, extremely well-featured mouse that’s ideal for shooters with a load of customisation possibilities – it’s going to cost a lot, right? Wrong. You can get all this advanced mouse technology without making much of a dent in your wallet.

The asking price for the Basilisk is currently £64.99 which is pretty impressive to say the least compared to the feature-sets of rival gaming mice in that kind of price bracket. If you’re tempted, you can grab yourself a Basilisk over at Razer’s online store.

The mouse comes in black, white, or quartz pink colours, and is backed by a reassuring two-year warranty from Razer. A further benefit is that if you purchase direct from Razer’s online store, there’s a 14-day risk-free return policy – so if you find the Basilisk doesn’t suit you for whatever reason, you can send it back. We’re betting that’s not likely to happen, though…