2019 was a great year for Google Chrome. Despite a hiccup where an experimental update broke it temporarily, it has remained the world’s most popular browser, and is currently rendering sites for between 48% and 64% of web users (depending on who’s counting).

Google isn’t resting on its laurels though, and has lots of new features in teh works for 2020. Here are the ones you should be looking out for, including some we want wait to try, and a few that might prove to be a step in the wrong direction.

One of the features we’re most looking forward to in 2020 is dark mode for Chrome on mobile devices. If you have an Android phone or tablet, you can try an experimental version of dark mode right now by entering chrome://flags in the address bar and enabling the options ‘Android web contents dark mode’ and ‘Android Chrome UI dark mode’. Once that’s done, restart the browser, open the settings menu and select the new ‘Dark’ option under ‘Themes’. This is only an experiment, though, and the final version might look quite different.

Google is still ironing out a few bugs with how the browser looks and renders pages in dark mode, but we anticipate the Android version will be ready for public release in the first quarter of 2020, with an iOS release soon after.

Another feature that’s accessible through chrome://flags is parallel downloading. This effectively splits files into several parts, which are downloaded simultaneously. It’s the same technique stand-alone download managers use to help you grab files faster, and would be a welcome addition to Chrome, particularly now that fiber broadband is becoming more commonplace. Keep an eye out for it appearing in 2020.

This feature is on its way, but it’s not necessarily something we’re particularly looking forward to. Chrome Canary users recently gained the ability to share webpages with one another via QR codes. The code is generated on one device, and can be scanned using the camera on another.

It’s not a totally novel way to share sites (Opera has offered the same thing for ages), and we’re not big fans of QR codes. You have to download a dedicated app to scan them, and there’s no way of telling where they’ll lead before you do so. The potential for phishing is huge. We’d prefer to share sites with people we trust via a messaging app. 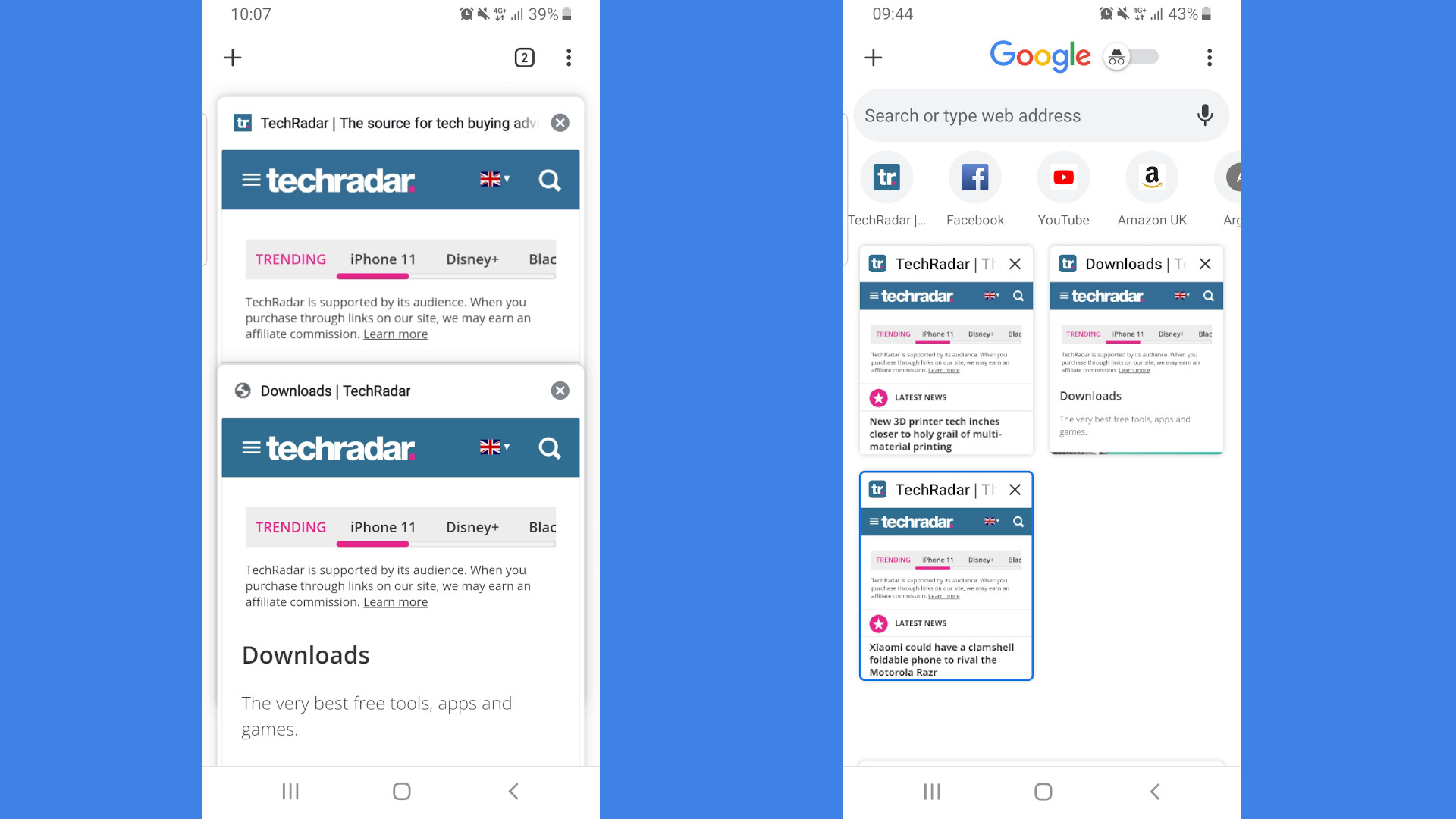 The old Chrome tab switcher on the left, and the redesigned version on the right

Currently, when you want to change tabs in Chrome on your phone or tablet, you tap a button to bring up the tab switcher and take your pick from a set of large ‘cards’ showing all the pages you  have open. It’s simple and effective, but that could all change in 2020 with the introduction of a new tab switcher that adds a whole lot of new options to the same screen.

The new tab switcher is being tested in the Dev and Canary builds of Chrome, and although it may change before it becomes part of the release version, it looks pretty polished. In addition to small previews of each open tabs, it features (take a deep breath) a Google logo front and center, an Incognito mode toggle, a set of links to recently visited sites, a search bar, an options menu, and a button for creating new tabs. An improvement? We’re not so sure.

This is a feature proposed by a group of Chrome developers, who claim “the web can do better” when it comes to user experiences. The idea is that websites that load particularly slowly will be labelled in some way to warm users that they’re going to be waiting around for a while, and might prefer to look for content elsewhere. This warning could take the form of a splash screen, information that appears in a context menu when you right-click, or a little green progress bar to indicate that a site is particularly speedy.

There’s no guarantee that such labels will appear in 2020, but Google is putting a lot of effort into pushing its best practice guidelines for web developers, so we wouldn’t be surprised to see something along these lines in the near future.

This feature is purely speculative, but it’s one we’d like to see. At the tail end of 2019, Google unveiled a new tool that will warn you if any of your online account details have been revealed in a recent data breach. It’s a handy feature, and bears a strong similarity to Firefox Monitor.

We wouldn’t be surprised if Google decides to follow in Mozilla’s footsteps and also release its own password manager in 2020, helping keep your accounts secure from phishing attempts and avoid the temptation to re-use passwords for multiple different services. Perhaps it could even be combined with Google Drive, allowing you to move sensitive files from Drive into a secure, encrypted vault along with your passwords.