GTA 5 is now free to download from the Epic Games Store, which means it’s yours to keep forever if you snag it before May 21. It is now available to download here if you have an Epic Games Store account, though demand is so high that Epic is struggling to meet demand for the time being, so you might struggle to load the page until that’s fixed.

Epic has acknowledged this, and a fix is coming.

Part of the Epic Games Store’s ongoing free games promotion, GTA 5 is arguably the biggest title the publisher has given away yet.

Rumors were circulating that Rockstar’s action-adventure epic would be given away for free yesterday, and the news was confirmed by Epic themselves, albeit prematurely, who tweeted the announcement below. 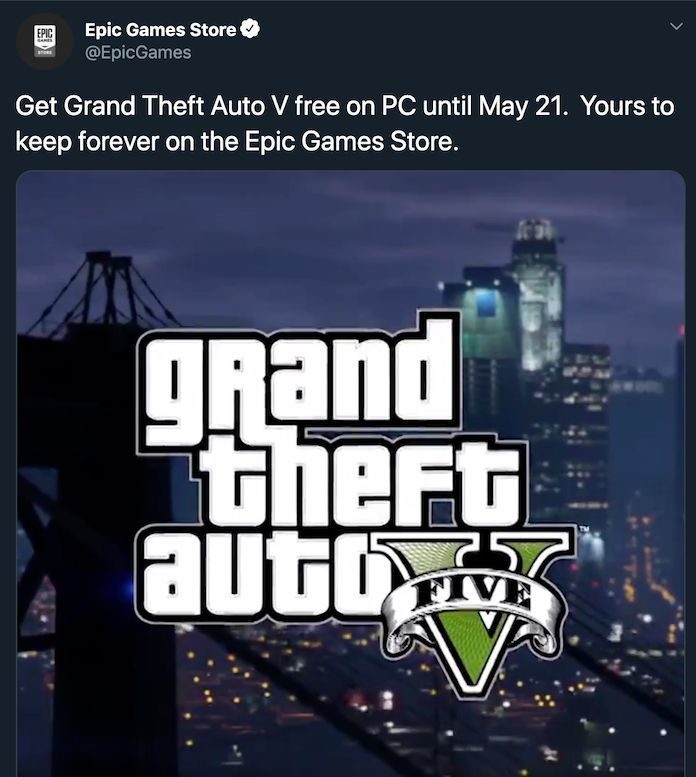 The tweet has since been deleted, but not before it was preserved on the internet by eagle-eyed users. Now, the game is live for you to download.

GTA 5 continues to sell a phenomenal amount of units every month and is one of the most critically-acclaimed games of this generation. It’s understandable, then, that fans are eagerly awaiting GTA 6 with fevered anticipation.

Rockstar recently penned a deal with Microsoft to bring its other open-world smash hit, Red Dead Redemption 2, to Xbox Game Pass. You can saddle up right now if you’re a subscriber, and we strongly recommend you do as it’s a typically excellent open world adventure from Rockstar.

To download Grand Theft Auto 5, sign up for an Epic Games Store account and head over to the store. The free games section is clearly marked, so click on GTA 5 and bada bing, bada boom – you’ve got one of the best games of this generation for absolutely nothing. It’s daylight robbery. Note, though, that the store has struggled a little to keep up with demand since the game went live, so you might need to come back later and try again.