It seems that leakers just can’t get enough of this whole Renoir desktop APU business. This time a whole lineup of AMD Ryzen 4000 APUs have been spotted.

Igor Wallosek of Igor’s Lab has just published AMD’s “Renoir” APU portfolio, listing quite a few Ryzen APUs. More importantly, the list, which he obtained from an unnamed source, also contains quite a lot of very specific information regarding technical specifications.

Obviously, we need to take this with a pinch of salt. However, if these listings are in fact real, then AMD is ramping up its APU line with an 8-core, 16-thread APU flagship. 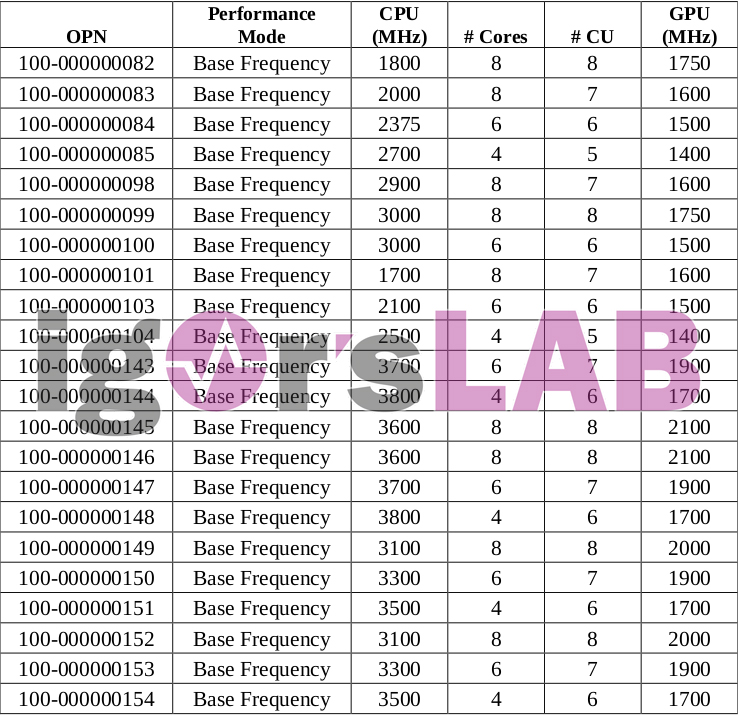 Ramping up the APU flagship

Unfortunately, the portfolio only displays the products’ OPN numbers, so we can’t confirm whether or not the recently leaked Ryzen 7 4700G is indeed real. There is one APU on this list with 8 cores, a CPU base clock of 3GHz, and iGPU clocked at 1750MHz.

While this somewhat supports an earlier leak spotted by @_rogame, that at least one APU with those specifications exists and is currently being tested, this particular APU in the listing seems to be for mobile, not desktop.

You can, however, see from the listing below that there are four desktop APUs with 8 cores and 16 threads supporting the rumor that AMD is doubling up on its flagship, the Ryzen 5 3400G, in terms of cores.

These APUs also have 8 CUs, 512 Stream Processors (SPs) and impressively high CPU base frequencies at only 65W and 35W TDPs, which means that they’re going to offer decent performance boosts while being power efficient as well.

Wallosek says that not all of these will make the final line-up, and AMD could still tweak the specs so they might be slightly different on the production models. Still, this gives us a pretty good peek at what’s in store for Team Red. We’re sure AMD will lift the veil from these processors when its ready to show off the rest of the Ryzen 4000 desktop lineup.