Nvidia RTX 3080 (or 3090) is reportedly certified, suggesting an imminent release 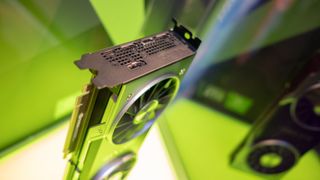 GPU – or indeed whatever these cards might be named) could have just popped up in a freshly spotted certification with the Korean National Radio Research Agency, in the latest from the graphics grapevine.

spotted the certification for a model PG133A, the PG133 board being previously shared on Twitter by well-known leaker kopite7kimi a week ago.

The theory is that the PG132 board design will be the one employed by third-party graphics card manufacturers, with the PG133 representing Nvidia’s own Founders Edition – in the form of the

So while it’s not clear what this product might be, it could be Nvidia’s own RTX 3080 or 3090 card, as mentioned at the outset. But whatever the case, the GPU should be readying for an imminent launch, because this kind of certification usually happens just prior to release.

Of course, that lines up with the fact that Nvidia’s big launch for next-gen Ampere graphics cards is imminent,

with an event scheduled for September 1

, not much more than a week away now.

As mentioned, the RTX 3080 or 3090 names aren’t set in stone – far from it, we don’t even know for sure that Nvidia will run with the RTX 3000 family – but the rumor mill seems pretty convinced that this will be the naming convention used (or possibly the RTX 3080 Ti rather than 3090). There are arguments against this eventuality, mind you,

as we’ve put forward ourselves

These Ampere graphics cards are expected to be a serious step up in terms of performance from current Turing models, with the flagship GPU possibly stuffed with up to 24GB of VRAM (

depending on which rumor you believe

equally serious step up in pricing

when it comes to the high-end models, again going by recent speculation.

All of this needs to be treated cautiously, but the good thing is we’ll soon know the truth behind the specs and pricing.