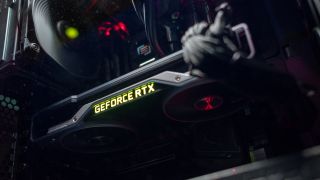 has just popped up online, with alleged photos of the graphics card being posted on Twitter.

Even so, we should still sprinkle condiments around liberally with this one, as the source isn’t one we’re familiar with, and we should be particularly cautious about the price aired in the tweet.

Note that @GarnetSunset mentions an asking price of $2,000 in the initial tweet, but subsequently corrects that to $1,400 (a price we have seen

floated before via the rumor mill

). He also clarifies that this is the RTX 3090 (again, we can take that with a good deal of caution too – Nvidia may come up with a

for its next-gen GPUs, although we are seeing the 3090 label pop up with more regularity now as we near the Ampere launch).

What’s clear enough is that this looks to be a giant of a GPU, as you can see in the images in which it is sat next to a current-gen RTX 2080, and absolutely dwarfs it.

If this is indeed Nvidia’s incoming top-end graphics card, the RTX 3090 will be a three slot GPU, no less, as you can see from the mounting bracket. And by the looks of it, the GPU could present size problems for smaller cases, or indeed concerns about supporting the thing when putting it into the PCIe slot (perhaps requiring the use of some kind of support to prevent the card sagging).

As mentioned, the design looks the same as some of the previous leaked images we’ve seen, which include the

. That massive heatsink is accompanied by a pair of fans, as you can see: one on the front, and one on the back.

The rumors about hefty power usage – with a 350W TDP having been previously speculated, and

potentially the use of a new power connector

If true, those prices are all notched up (by $100, and $50 in the latter case) compared to the RTX 2000 series at release, but treat this nugget of info with even more caution (and remember that supposedly the