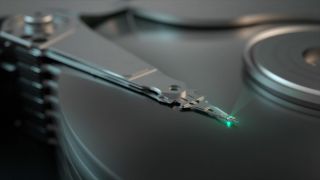 has already confirmed plans to release its first hard drives featuring heat-assisted magnetic recording (HAMR) technology later this year and recently the first of such drives was listed in the company’s product roadmap, obtained by

As it turns out, Seagate’s upcoming HAMR HDDs are listed as Exos 20+, which confirms that the company’s first HAMR drives are set to feature a 20TB capacity. Over time, the company will also release HAMR HDDs with even greater capacities, but has not yet confirmed precisely how large these drive will be.

does not want to disclose capacities of its future Exos drives for competitive reasons, but usually capacity points are not considered as top-secret information. Further, customers of Seagate and Western Digital need to have an idea about upcoming capacities so they can plan effectively for the future.

Seagate’s upcoming Exos 20+ hard drives are expected to be drop-in compatible with existing 3.5-inch bays, which means that power consumption of the new HDDs will be lower than 12W.

At present, select customers of Seagate are testing prototype HAMR drives, but capacities of these test drives are lower than 20TB.