Nvidia GeForce RTX 3090 announced – the most powerful gaming GPU ever

Nvidia announces its most powerful gaming GPU ever 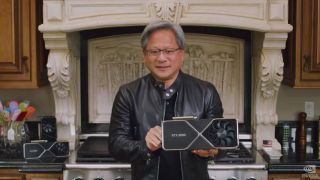 The Nvidia GeForce RTX 3090 has just been announced, ushering a new generation of Ampere graphics cards.

While rumors that Nvidia was working on an ultra-powerful RTX 3090 have been swirling for a while now, many people (

) struggled to believe them. After all, the last time Nvidia released an ‘x90’ GPU was back in 2012 with the

So, we’re happy to be proved wrong, as the Nvidia GeForce RTX 3090 is official – and it’s a

. It’s easily the most powerful gaming graphics card Nvidia has ever made, and it will easily blow the

out of the water when they are released later this year.

If you’re as excited about the Nvidia GeForce RTX 3090 as we are, then read on, as we’ve got everything we know so far about the new GPU below, along with all the latest rumors and speculation as well.


has published rumors that Nvidia will launch three new graphics cards in September, followed by another GPU in October and two more at a later date that has not yet been decided, with the RTX 3090 possibly being released in the second half of September, after the

In fact, those rumors were bang on the money, with the RTX 3090 launch date officially revealed as September 24.

We had been bracing ourselves for a high RTX 3090 price, considering the specs, and while we still don’t know the price of the RTX 3090, rumors have suggested that it

For a super-high price, you’d hope the Nvidia GeForce RTX 3090 would be a super-powerful GPU, and while we won’t know just how powerful it is until our full RTX 3090 review, which should come soon, on paper, at least, it seems that’s indeed what we’re getting, along with rumors that the

This is a big leap over the RTX 2080 Ti, and that 24GB of memory could put it in RTX Titan terrority. Nvidia’s Titan GPUs, which although based on the same tech as Nvidia’s gaming GPUs, are in fact aimed at content creators and come with high price tags which are relatively affordable compared to professional GPUs.

That amount of power requires… a lot of power, and

rumors suggest that the GPU will be


, and will require an adaptor to plug into the PSU.

had long been rumored, and features a speed of 19.5Gbps, with power consumption pegged at 350W (again as

We also know manufacturers like Asus and Zotac will make their own versions of the RTX 3090, which could come with slightly different (though still very powerful) specs.