Something to fill the gaping memory gap in the RTX 3000 range? 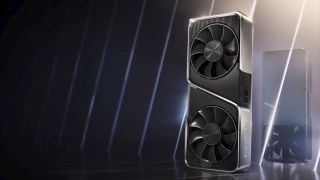 graphics cards, as you’ve doubtless seen, but already the rumor mill is claiming there’s an RTX 3070 Ti model in the wings as well.

spotted that Lenovo’s Legion T7 PCs have four SKUs with the GeForce RTX 3070 Ti listed as their graphics card, with the GPU apparently coming complete with 16GB of video memory.

GDDR6 RAM is listed for the purported 3070 Ti, but given that it’s also listed for the RTX 3080 – which uses GDDR6X – this may just be a mistake (or as Videocardz points out, maybe these are all OEM variants of these GPUs – although that seems like a stretch).

This whole thing may just be a mistake, of course, and Lenovo has already removed the entries for these new variants of the Legion T7 (which use Intel Comet Lake processors) from its model

, leaving just suspicious gaps in the model codenames. Presumably that happened after someone tipped them that there was a mistake here – either an outright error, or an accidentally premature mention of the 3070 Ti.

Heard this one before

This is certainly a leak which requires a heavy dose of condiments, although the existence of an

variant – one that could be called either the 3070 Ti or 3070 Super – is not a new rumor, and previous speculation has pointed to 16GB of memory for this card.

There’s clearly a big gap in the current VRAM loadouts for RTX 3000 graphics cards, with a jump from 10GB to 24GB, and nothing in-between (yet).

Nvidia’s RTX 3070 graphics card doesn’t go on sale until October, with the RTX 3080 being the first to hit the streets on September 17, with all these

(and a one-year subscription to GeForce Now).