Nvidia RTX 3000 GPUs will come with a free copy of Watch Dogs: Legion

And a free year of GeForce Now game streaming 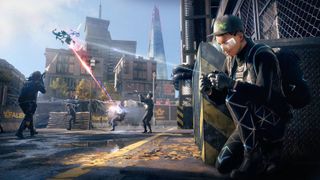 Nvidia’s GeForce RTX 3000 range of graphics cards, which the company just revealed, will be bundled with a free copy of

That’s not all buyers of a

models officially go on sale) will not only include the Ubisoft game, but also a free year of subscription to Nvidia’s GeForce Now game streaming service.

Those are some pretty nifty additions to Nvidia’s Ampere graphics cards, with the RTX 3070 already being priced competitively ($499 – or £469) for the power you’re getting with this card (remember that it beats the RTX 2080 Ti – the staggeringly expensive flagship of the outgoing generation – at least on paper).

Watch Dogs: Legion is due out at the end of October – the freebie gives you a digital copy to be downloaded onto your PC – so you may have to wait a little while after your GPU purchase to redeem it.

Ubisoft’s next instalment in the Watch Dogs franchise is certainly highly ambitious, although we expressed some concerns about the game in our

As you might expect, Watch Dogs: Legion benefits from ray tracing as well as Nvidia’s DLSS technology.

The offer is open to buyers of an RTX 3070, 3080 or 3090 graphics card from participating manufacturers, or those buying a PC with one of those GPUs from certain retailers (check out more details

). It runs from September 17 through to October 29 (when Legion is released).