Are the Radeon RX 6000 series GPUs ready to roll? 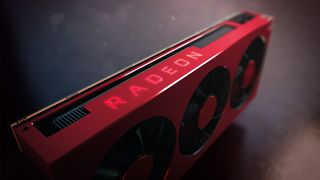 might be just around the corner, or at least we spotted a hint of that being a possibility, courtesy of a teaser in Fortnite.

Streamer GinaDarling found an Easter egg in the battle royale which proclaims: “Something big is coming to the AMD battle arena.”

So, that would appear to be a direct reference to

Navi, and the other interesting point here, as

notes, is that she had to enter a passcode into the in-game terminal to receive the message – and that code was ‘6000’. So again, this appears to be a reference to AMD’s range of incoming GPUs, or more specifically the likelihood that Big Navi will be Radeon 6000 series cards.

Scott Herkelman, VP and general manager of AMD Radeon, chipped in to reply to Gina on Twitter saying “Nice job finding the easter egg!” confirming its legitimacy as a teaser, but of course, this very much has the vibe of a staged event.

Naturally, it’s prompted some excitement given that this could indicate AMD is starting to ramp up to the big launch of its next-gen graphics cards, which is expected to happen before the end of 2020.

Grabbing back some hype?

Then again, given the

major impact Nvidia has just made

with its RTX 3000 GPU launch – these graphics cards look seriously tasty, with the

– perhaps this stunt is simply AMD’s way of grabbing back some hype and attention for itself at a difficult time.

However, given that there are only a few months left in this year anyway, you would hope the launch of Big Navi graphics cards is coming sooner rather than later. Indeed, previous rumors have

, so who knows, the GPUs could be revealed sooner than you think – although we haven’t heard anything from the grapevine on the launch lately.

Whatever the case, as we discussed earlier today, there are various reasons why it may be prudent to

wait for AMD to make its Big Navi move

before you buy the GeForce RTX 3080 – which will be the first GPU to be unleashed on the world by Nvidia come September 17.

Then again, you may have no choice but to sit tight and wait, considering all the speculation contending that

at launch (and inventory levels may not pick up until 2021, or that’s the pessimistic rumor anyway).