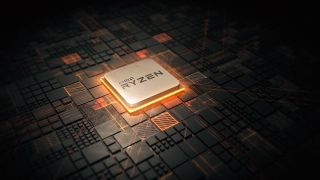 desktop processors are set to emerge before the year is out, and apparently these chips will arrive with a 10-core product, at least going by the latest from the grapevine.

jumping from 8-cores to 12-cores, but according to Yuri Bubliy (known as ‘1usmus’ – the

including DRAM Calculator), there will be a 10-core part with the Ryzen 4000 series.

Of course, this is just a rumor, so take it with a heavy dose of condiments, but what it would mean if true is that with Ryzen 4000, AMD would have a CPU model directly targeting Intel’s current Comet Lake flagship, which is also 10-cores (the

The speculation provides absolutely nothing else in the way of details, so we don’t know where this 10-core part might fit into the Ryzen 4000 range. Perhaps the obvious guess would be the Ryzen 4800X, meaning that would step up from 8-cores to 10-cores, with the 4700X staying on 8-cores, making for a more obvious point of differentiation in that section of AMD’s range.

Some folks on Twitter are certainly getting hopeful that any core count rejig in the higher-end Ryzen 4000 CPUs might just mean that the 4600X steps up to being 8-core (from 6-core). Ultimately, this is all guesswork based on a rumor, though, so bear that very firmly in mind.

Bubliy says that he uncovered this information from the new AGESA 1.0.8.1 firmware, and he also observes that Ryzen 4000 (Zen 3) will benefit from a ‘curve optimizer’. This will “allow you to configure the boost of the Ryzen processor” and “customize the frequency for each core without any restrictions”, apparently.

This sounds like a pretty neat feature for those who like to fine-tune their processor, perhaps allowing for users to really push their best-performing CPU cores, and let games which use just one core (or few cores) employ those to run faster. Again, though, heavy pinches of salt are required here.

on track to launch

later in 2020, we’ve heard several times now, so we should see these processors revealed likely in the next couple of months.