Another indication that this will be a stupendously powerful graphics card 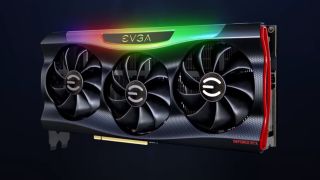 might just overclock to above the 2GHz level, at least with the graphics cards from third-party manufacturers.

That’s a possibility that a new video from GPU maker EVGA suggests could be a reality when the 3090 launches – or at least when the company’s own RTX 3090 FTW3 appears on the scene.

The YouTube clip in question shows EVGA’s graphics card in all its glory, but the interesting bit comes at the end, where EVGA’s Precision X1 software is shown – the firm’s overclocking tool (which does much more besides) – with the RTX 3090 having been overclocked to 2105MHz or just over 2.1GHz (from 1695MHz).

Now, we need to be cautious about this – it’s just a glimpse of an app screen in a promotional video, so it may not reflect the actual capabilities of EVGA’s RTX 3090 FTW3 at all. There’s also the fact that the memory clock speeds appear to be totally off the mark, having been almost halved in the second screen shown where the 2.1GHz overclock is active. It’s a mystery why that would be the case.

If it does indeed reflect the reality for this GPU, that’s a pretty big leap of an overclock: 410MHz, no less (although in the screen grabbed, if you look carefully, a 500MHz increase is indicated by the Precision X1 app – another slight oddity which could cast doubt on the clip’s validity).

Existing RTX 2000 series cards certainly don’t hit these kind of boost levels, so it’s an exciting prospect for sure – albeit one we have to be careful around, because there’s a chance this is just EVGA’s marketing department getting things wrong on the screen grabs – or maybe even just stoking hype, the more cynical might argue.

stock could be thin on the ground

(not for the first time with a major GPU launch) going by the rumor mill.