AMD Ryzen continues to dominate CPU market, but Intel is clawing its way back

At least going by the figures from one online retailer 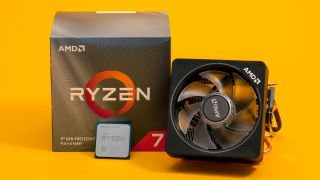 are still completely dominant in the desktop CPU market, but Intel is gaining some ground back, it would seem – and indeed Intel’s market share has never been stronger in 2020 than it is now, according to fresh figures from one German retailer.

, who usually provides these figures).

So let’s be in no doubt that AMD is still winning by a mile (or three), and indeed even in terms of revenue share – where Intel used to perform better than with the units shifted breakdown – AMD has an 81% share.

– so that balance has changed dramatically.

The chink of light for Intel here, though, is that during 2020, AMD previously reached a high of 91% of units sold in April, leaving Intel on a paltry 9% – but since then, and the Comet Lake launch, Intel has moved up to 16%, the best performance it has seen all year at Mindfactory, as we mentioned at the outset.

As ever, bear in mind that these are statistics from just one online retailer, so they hardly represent the entire picture of the CPU market (and of course this relates to sales of desktop chips, not laptops, where Intel still rules the roost).

So why the (admittedly minor) Intel resurgence? Is this a sign that Comet Lake is perhaps doing the trick to some extent against Ryzen 3000 and making some headway?

Certainly, the Core i7-10700K is selling well, and is Intel’s strongest offering overall, but the other main player here interestingly is the 9th-gen flagship, the Core i9-9900K – which is selling far more than the new 10900K.

Intel’s 9th-gen chips are continuing to do well overall, in fact, and the 9700K is just about outdoing the 10600K as the next two bestselling Intel processors after the 10700K and 9900K. From an overall perspective, a lot of this may be down to stock issues with Comet Lake, and indeed discounts on the outgoing Coffee Late Refresh CPUs, as prices have been cut considerably by Mindfactory – with the 9900K coming down the most (from around €530 before Comet Lake, to about €400 afterwards, a price drop of around 25%).

While things are looking at least a bit brighter for Intel right now, the looming

dark cloud on the near horizon

, which will doubtless cause Mindfactory’s sales figures to shift once again (particularly if the rumor mill is on the money about

how powerful these next-gen Zen 3 chips will be