AMD Big Navi might not beat Nvidia RTX 3080, but it could come close

According to new rumors 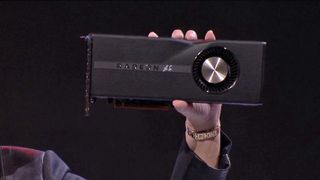 New rumors suggest that the upcoming

card, which will excite some people and disappoint others.

It’s exciting because the new RTX 3080 is shaping up to be a formidable flagship graphics card – our RTX 3080 review will be coming soon to explain more – so the idea that AMD is building a GPU that can compete with one of the most powerful cards Nvidia has made is exciting stuff.

, the RDNA 2 Big Navi GPU will be within “spitting distance of the RTX 3080 in rasterization performance. If AMD doesn’t ‘beat’ the 3080, they will assuredly crush the

Nvidia has  dominated the high-end GPU market for a while now, so it’ll be good to see AMD come out with a graphics card that competes with Nvidia’s flagship RTX 3080.

Anyone who was hoping that AMD would release an ‘Nvidia killer’ GPU could be disappointed, as the rumor hints that while Big Navi will come close to the RTX 3080’s performance, it won’t beat it.

Meanwhile, Nvidia also has the much more powerful

GPU as well, so it looks like Team Green will continue to dominate the high end and enthusiast market unopposed.


, Moore’s Law is Dead claims that it has more details on Big Navi. Apparently, it will be ‘substantially’ more power efficient than Nvidia’s Ampere cards, like the RTX 3080. This could be good news, as the power-hungry RTX 3080 and 3090 could mean some upgraders need new power supply units to run.

It could also be smaller than Ampere cards, thanks to “incredible improvements to how RDNA manages memory and bandwidth”. Again, this could make the GPU easier to install.

Also, while AMD is taking Nvidia’s DLSS tech seriously, which offers big performance gains at ultra high resolutions, there’s no confirmation if AMD has an alternative.

Hopefully we’ll find out more about Big Navi at