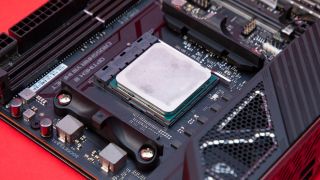 (Image credit: Future)
AMD’s next-gen Zen 3-based processors will be the Ryzen 5000 series – skipping the Ryzen 4000 name on the desktop – according to the latest gossip, and a couple of rumored incoming processors have been highlighted on Twitter. This comes from leaker Patrick Shur, who authored a tweet where he flags up the alleged AMD Ryzen 9 5900X and Ryzen 7 5800X. Your first question might be: why skip Ryzen 4000 for desktop CPUs? Of course, we already have Ryzen 4000 mobile chips (and APUs), and these laptop chips have been around for some time now . So the theory is that Ryzen 5000 mobile might be out early in 2021 (rumor again has it), potentially not long after the new Zen 3-based desktop CPUs ( which will be revealed October 8 ), so switching them both to be named as the Ryzen 5000 family makes more sense (with desktop leading, followed by mobile and APUs). That’s just speculation, of course, although this rumor has been kicking about for a couple of weeks now. We’d still treat it with a whole heap of caution, though.