Nvidia RTX 3080 GPU is overclocked to 2.34GHz with record-breaking results 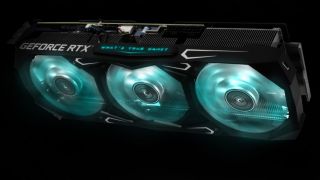 (Image credit: Galax)
Nvidia’s GeForce RTX 3080 graphics card has been overclocked by experts to produce some predictably record-breaking results (with exotic cooling – liquid nitrogen – and all manner of tweaking, as you might expect). As Wccftech spotted, Ronaldo Buassali, who is GPU maker Galax’s in-house overclocker (Galax is KFA2 in Europe, by the way), managed to crank a Galax RTX 3080 SG graphics card up to 2340MHz to take the top spot in 3DMark’s Port Royal benchmark with a score of 13,488 points. And another record was set by Buassali and his team in 3DMark Time Spy Extreme where the overclocker grabbed the top spot with a graphics score of 10,595 (with the GPU running at 2310MHz) – a result which is 7% clear of the previous fastest RTX 2080 Ti (which was overclocked to 2745 MHz). And a further record was set for Fire Strike Ultra at 12,815, just outdoing the Titan RTX which was the previous crown holder here.

The other really interesting point to note is that with these early runs, Buassali was overclocking the GPU, but not the memory – so when the VRAM is also juiced up, we should get even better results from the RTX 3080. Buassali and his team concede that these records will be broken in a short time, with the release of more powerful GPUs – the RTX 3090 is about to be unleashed on September 24, of course – but it’s still interesting to see how the RTX 3080 can step up to the plate right now. The downside to the RTX 3080 is, of course, that you’ll struggle to find any stock to actually be able to buy one , and the same has been predicted of the RTX 3090 by the rumor mill previously. Its hefty price tag seemingly won’t be much of a deterrent to buyers looking at the sales of RTX 3080 graphics cards on eBay , and exactly how much they’re going for when it comes to keen early Nvidia Ampere adopters.
Today’s best graphics card deals
ASUS GeForce GTX 1650 Phoenix…
BHPhoto
$144.99 View
Asus GeForce GTX 1650…
Amazon
Prime
$149.99 View
XFX – AMD Radeon RX 580 GTS…
Best Buy
$189.99 View
Sapphire PULSE Radeon RX 580…
Newegg
$219.99 View We check over 130 million products every day for the best prices
See more Graphics cards news Article source: https://www.techradar.com/news/nvidia-rtx-3080-gpu-is-overclocked-to-234ghz-with-record-breaking-results
Company Information
Menu
You are Protected