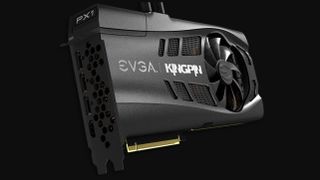 has just launched, and the

– targeted at ‘extreme’ enthusiasts and 8K gaming – has unsurprisingly blown away the existing record for 3DMark’s Port Royal benchmark.

One of EVGA’s RTX 3090 graphics cards was overclocked by Vince ‘Kingpin’ Lucido to a clock speed of 2,580MHz (using liquid nitrogen cooling) with the memory pushed to 21.5Gbps (just over 10% faster than normal) to record a huge score of 16,673.

The EVGA card in question was the RTX 3090 Kingpin edition to be precise, which isn’t yet available, but apparently the GPU maker will be getting it onto shelves quicker than has happened with previous Kingpin models, as

As mentioned, that’s a new world record for the Port Royal benchmark, and it’s 2,000 points clear of the next highest score in fact, which is also an RTX 3090. As expected, it blows away the

which grabbed the top spot briefly after launch, with Ronaldo Buassali’s efforts (Galax’s in-house overclocker) which hit a still impressive 14,131 (with a 2.43GHz overclock,

The fastest result from the last-generation Nvidia GPUs using the RTX 2080 Ti stands at 13,090, in case you were wondering.

Kingpin used liquid nitrogen cooling with the GPU and a water-cooled Intel Core i9-10900K, not to mention a 2,000W EVGA PSU – the RTX 3090 Kingpin graphics card will come with three 8-pin power connectors, by the way.