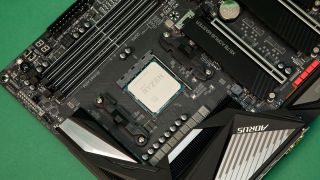 5800X and 5900X will lead the charge of next-gen Zen 3-based processors, and are set to hit shelves on October 20, according to the rumor mill – with a further source backing that date up, and mentioning the possibility of October 27.

DRAM Calculator and ClockTuner for Ryzen

If this speculation turns out to be correct – and take it with a suitably large dose of condiments – AMD’s plan is to reveal the Ryzen 5000 range on October 8,

which we know is happening

, followed by the launch of those two CPUs 12 days later.

Then the theory runs that there are another two processors launching in the initial batch of models, the Ryzen 5950X and mid-range 5600X, which will follow later (and presumably further CPUs won’t be too far behind that).

backs up Bubliy’s assertion that the initial on-sale date could well be October 20, but notes that it might come a week later on October 27 – and agrees on the two Ryzen models which will be arriving on shelves, but further adds that a third CPU could be present with the initial release (the 5600X would make sense).

We’d certainly advise caution around all of this, although we have been seeing the purported 5800X pop up quite a bit lately, including in an actual game benchmark most recently,

that will likely have Intel worried.

Note also Bubliy’s mention of next-gen Navi graphics cards, with the initial Radeon RX 6000 models expected to be out on shelves likely in the third week of November, following their initial reveal on October 28.

That sounds plausible, particularly if AMD wants to ensure that stock levels are better than Nvidia’s RTX 3000 launch –

– and so might want to wait a little while before kicking-off sales, but again, grab some fistfuls of salt here.