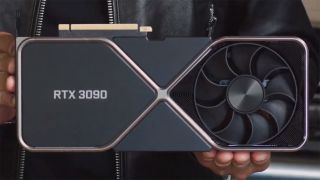 Crysis running entirely on a CPU

(with no graphics card needed at all), and here’s another interesting feat along similar (kind of) lines: Crysis 3 running directly from a GPU, having been installed in the card’s memory.

Yes, this is another strange one – and like the aforementioned CPU shenanigans, more of an interesting trick than anything actually useful – but an enterprising software engineer installed Crysis on a

How does that work? As Strife212 explained in a tweet, she used an application called VRAM Drive to implement a 15GB virtual drive (NTFS partition) within the RTX 3090’s VRAM.

Of course, that graphics card has a ton of video memory – 24GB of the stuff – meaning the remaining 9GB of VRAM was enough for the game to use as graphics memory.

Plenty enough, in fact, because Crysis ran pretty well directly from the graphics card, even at 4K and high settings, with one screenshot showing 75 frames per second being achieved. Pretty smooth indeed, and total VRAM usage only reached 20.5GB, meaning a few Gigabytes were still spare.

Theoretically, using VRAM as an installation medium should produce some seriously fast load times, although Strife212 noted that there is a bottleneck somewhere (later in that Twitter thread), as speeds – while obviously good – didn’t quite achieve what NVMe SSDs can manage today. Certainly not the top drives anyway, with the latest

PCIe 4.0 NVMe SSDs which are turning up now

Perhaps we can expect more innovative and strange ways to run the Crysis games in the future, because, well: why not?