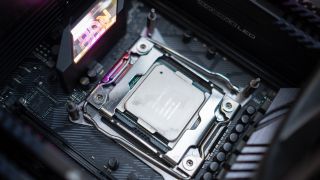 desktop processors are expected to land in March 2021, according to the latest from the rumor mill.

. Of course, we have to assume that the roadmap is genuine and not faked somehow, but

, which spotted this, backs up the claimed March timeframe with

from its own sources that Intel has just changed the Rocket Lake launch date like so.

This is no real surprise, as despite some

might emerge sooner than expected – possibly at the very beginning of 2021, or there was even talk of a late 2020 launch at one point – always seemed rather unrealistic.

was delayed and only hit the shelves in May, so Intel’s launch timeframe from 10th to 11th-gen was never likely to be squeezed that tightly together.

Spring has always seemed the most likely release date for Rocket Lake chips, with a lot of speculation pointing to either a Q1 or Q2 release in 2021, and March puts us pretty much bang in the middle of that window. Both Intel’s 11th-gen CPUs and corresponding 500-series motherboards will launch at some point in March, the rumor mill reckons.

Still, we must bear in mind that even though there are two separate reports apparently confirming Intel is now looking at March 2021 for Rocket Lake, this is still just speculation.

The leaked roadmap also has an interesting nugget of information for those keenly awaiting next-gen high-end desktop processors (HEDT) from Intel, as it shows the current HEDT offerings (X299 chipset) will remain in place at least until June 2021. Although whether a successor will emerge mid-2021 is unclear, as the roadmap simply ends there with no next-generation family marked in.

HD Tecnologia theorizes that Intel’s HEDT successor may not turn up until late 2021, but treat that with even more caution than the rest of this story. Of course, we have previously seen a

which informed us that there won’t be any HEDT CPUs coming from Intel during 2020.

When they arrive, Rocket Lake processors will reportedly top out at 8-cores,

taking a step back from the 10-cores

offered by the Comet Lake flagship. If March 2021 is indeed the intended launch timeframe – and there’s no slippage – this isn’t the worst news for Intel (as we mentioned, Q2 2021 was a possibility floating around among the rumors out there).

However, considering that AMD’s Zen 3-based CPUs are about to be launched,

reportedly as the Ryzen 5000 series

, that still gives Intel’s rival a

how powerful these incoming AMD chips

are shaping up to be…