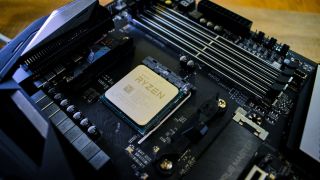 Zen 3-based desktop processors will be called Ryzen 5000, at least according to the firm’s official YouTube channel – and these chips will focus on gamers as top priority, it would seem.

The eagle-eyed folks over at

Since this was flagged up, the reference to ‘5000 Series’ has been removed, so seemingly someone has slipped up and then corrected their mistake.

The rumor mill first started asserting that AMD was going to use the Ryzen 5000 name for Zen 3 CPUs back in August, and

this rumor has persisted

, with various model names popping up in recent times. According to the CPU grapevine, the first processors to

AMD is skipping Ryzen 4000 on desktop – mobile offerings in this series have already been out for some time – in order to unify its naming scheme with the desktop CPUs out first, and Ryzen 5000 mobile to follow, which makes more sense.

Or at least that’s the theory – even now we can’t take Ryzen 5000 as fully confirmed, not until Lisa Su utters the name of the range come the

The other interesting point here is AMD emphasizing that the new chips are ‘where gaming begins’, again underlining the gaming angle for Ryzen 5000, as the company has already been stressing previously (#GameOnAMD).

Further notice that PC gaming is mentioned first in quotes from AMD’s website like this: “With the next wave of AMD Ryzen processors and the all-new Zen 3 architecture, AMD is taking its PC gaming and content creation leadership to new heights.”

, have built serious expectations around how AMD’s next-gen CPUs could outgun Comet Lake in gaming scenarios. We’ll find out soon enough, as the

, and we’ll be on hand to break down and analyze the proceedings and announced products as always.