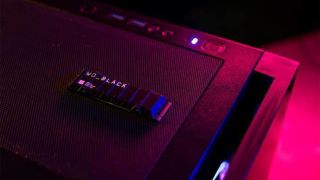 Western Digital has unleashed a new PCIe 4.0 SSD offering seriously speedy performance levels for gamers, along with an NVMe SSD add-in-card, plus a game dock.

The PCIe 4.0 drive is a WD Black series NVMe

which takes the baton from the SN750, ramping up speeds a long way. The WD Black SN850 makes use of what the firm describes as brand-new cache technology, and is rated for read speeds of up to 7,000 MB/s and writes of up to 5,300 MB/s.

That’s the claimed performance for the 1TB model, and there will also be a 2TB SSD, as well as a smaller 500GB drive. Western Digital further noted: “[The] SN850 NVMe SSD also delivers improved low queue-depth performance over its predecessor, allowing both gaming and everyday users to experience smoother loading of applications.”


The SN750 was well-liked and very competitively priced

Maintaining that compelling price-performance ratio, the SN850 will likely prove a potent challenger for Samsung’s 980 Pro when WD’s drive goes on sale before the end of October (a heatsink-equipped version of the SN850 will follow in Q1 2021, costing a bit more).

The SN850 offers theoretically slightly better performance than the 980 Pro – although we’ll have to test the claimed speeds, of course – for a little less cash (Samsung charges $149 for its 500GB drive).

Given that the Samsung 980 Pro already represents an excellent value proposition, as we concluded in our

, it’s easy to see why folks might be getting excited over the freshly revealed SN850.

The final product aired was the WD Black D50 Game Dock, which gives you an integrated NVMe SSD and a load of connectors for accessories and monitors (including two Thunderbolt 3 ports and a DisplayPort). You can plug the D50 into a laptop via a Thunderbolt 3 port.