Some Ryzen 3000 processors will have this freebie, too 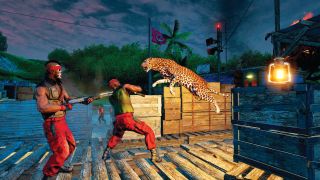 processors will be available on November 5, just a few weeks away now, and buyers of high-end chips will get a free copy of

thrown in for free.

Buyers of those Ryzen 5000 chips – and those purchasing a machine which comes with one of those CPUs – will be able to grab a digital download of Far Cry 6 when the game comes out on February 18, 2021. They’ll also get some bonus in-game items (skins and the like).

, which spotted this, points out, according to the AMD Rewards website, this offer goes live on October 20, ahead of the Ryzen 5000 processors going on sale on November 5 as mentioned.

Note that you must redeem your digital download code before January 30, 2021, even though Far Cry 6 doesn’t launch until a few weeks later as noted. The game will be delivered via Uplay, incidentally.

The open-world shooter is

set in a “tropical paradise frozen in time”

and features dictator Anton Castillo as the villain of the piece, a character played by actor Giancarlo Esposito (who was Gus Fring in Breaking Bad).

to those who purchase a

, so if you’re mulling a Ryzen 3rd-gen purchase and that’s your preferred game freebie, you best move quick. By the way, we’ve just seen the