AMD achieved a new all-time high for laptop processors, too 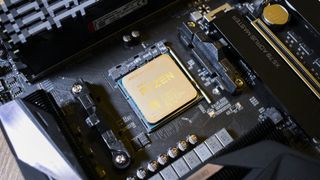 
AMD continues to forge ahead

with CPU market share according to another set of stats, and its performance in the latest figures for Q3 2020 from Mercury Research is the best the company has achieved in well over a decade – since the end of 2007, in fact.

That’s up strongly 6.3% year-on-year, and represents a major leap of 4.1% since the last quarter. As mentioned, it’s the best result AMD has seen in 13 years – and of course this is before the new

have even come out to doubtless widen the gap even further with Intel in terms of desktop chips.

Laptop x86 share saw AMD hit 20.2%, up a huge 5.5% year-on-year and a new all-time high for the company – notebook share has certainly witnessed strong growth throughout this year.

Ryzen mobile chips are clearly a strong proposition, and that’s going to be even more worrying for Intel than what has happened on the desktop in recent times. That said, AMD’s laptop gains have been ebbing throughout 2020, and it was only up 0.3% compared to the last quarter (dropping from a 2.9% gain in Q2). So Intel is at least fighting back and managing damage control for the moment on the notebook front, it would seem.

As for client x86 CPUs (excluding Internet of Things), that reached the same level as laptops at 20.2%, representing a 4.3% increase year-on-year (0.5% quarter-on-quarter) and the best result since 2011.

AMD is apparently making big strides at the high-end of the desktop market, which won’t really be a great surprise to those who have been watching the Ryzen versus Intel Core battle.

reports, Dean McCarron of Mercury Research observed: “A bit more than 60% of AMD’s increased desktop shipments came from what I’d consider high-end (e.g. not dual-core or APU units, so Matisse and a tiny bit of Pinnacle Ridge cores that remain).

“I’d say 100% of the gain came from the high-end for them, because Intel’s high-end was flat and AMD’s high-end grew, while Intel’s entry-level business outgrew AMD’s. Intel’s i3/Pentium/Celeron grew very strongly and if you limited the share to just entry-level, Intel would have gained in the third quarter.”

At any rate, this is clearly a stellar performance from AMD, although Intel isn’t without potential answers to stop its rival’s progress. As we noted above, Intel does seem to be stemming losses in the notebook arena somewhat, and new

coming onto the scene

for laptops (with Xe integrated graphics – and

There are also some

, Intel’s next-gen desktop processors. If early leaks are anything to go by, Rocket Lake could be a considerable step up,

– the main issue being that it’s not going to arrive for a while yet.

, but Intel certainly can’t afford any delays like it experienced with