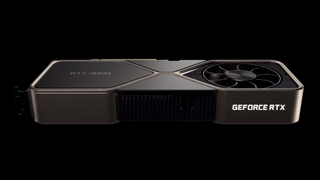 will have a Ti variant, the rumor mill is insisting, and it will supposedly run with 20GB of video memory.

This new leak comes from ever-active rumor monger Kopite7Kimi, who previously highlighted the

existence of the purported RTX 3080 Ti

on Twitter, and has now provided some further spec details (as ever, keep that salt shaker handy).

Of course, any potential 3080 Ti will theoretically need to differentiate itself from the RTX 3090, so it’ll doubtless be cut-down in performance terms in some manner – the most obvious route to take being lower clock speeds.

The rumor reckons that the 3080 Ti will run with the same power usage (320W) and memory speed as the RTX 3080 (19Gbps), but unsurprisingly it’ll beef up the amount of memory considerably – in fact doubling it to 20GB of GDDR6X VRAM. In theory we are looking at a 320-bit bus and a total bandwidth of 760GB/s. Again, large amounts of condiments all round…

Kopite7Kimi further asserts that there will be no NVLink support (to hook up two cards together), so the

will remain unique in that respect too.

Putting out a variant of the RTX 3080 which beefs up performance levels, but is considerably more affordable than the RTX 3090, makes sense in terms of answering AMD’s freshly revealed Radeon RX 6800 XT. AMD has of course made a huge splash with the reveal of its Big Navi graphics cards, so Nvidia will feel the need to do something.

And of course it makes sense to have an RTX 3080 spin which offers a much larger amount of on-board RAM, as there’s still a good deal of consternation about the 10GB loadout for the vanilla RTX 3080.

Despite Nvidia’s previous insistence that 10GB is enough for contemporary gaming, new games like Godfall, which will apparently require 12GB of VRAM for ‘ultra’ settings at 4K resolution, only drives home the need for a bigger helping of video memory. (Big Navi cards all have 16GB of VRAM).

Naturally, if the RTX 3080 Ti is forthcoming from Nvidia, the question is exactly where will it be pitched in price?

Presumably this graphics card will be considerably cheaper than the RTX 3090 – maybe pitched at $999 or so – but Nvidia will have to balance being competitive with the Radeon RX 6800 XT, which is cheaper still (indeed the 6900 XT is AMD’s $999 offering) against production issues. (Stock of all Nvidia RTX 3000 GPUs remains scarce, a situation that won’t change anytime soon – and with cards selling out as soon as they are made, that’s hardly a recipe for cheaper pricing).

Rumors have also been swirling about Nvidia pushing out further Ti variants, namely

graphics cards, with the latter seeming like a strong bet in recent times, even if the release date has

(and now supposedly stands at December 2). As ever, we will only know the truth behind all this speculation when Nvidia finally steps forward to announce the next member(s) of the RTX 3000 family.