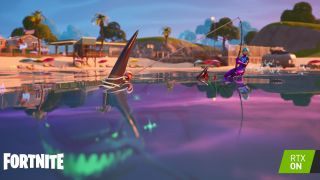 . Whatever that may be, thanks to a new trailer from Nvidia we know the popular battle royal game will soon support

It feels a tad wasted on a game that is known more for it’s cartoonish art style and ability to stoke viral dancing trends, but we have to admit that the before and after comparison shown in the Nvidia trailer is pretty pleasing.


Everything is going to see some attention from the DLSS support, including character models and buildings. Even the water effects (which were hardly known for any groundbreaking realism) are getting a visual facelift.

At the time of posting this, there’s still not a huge amount of games that have confirmed support for ray tracing, but Fortnite’s staggering popularity doesn’t make it an unusual choice. If anything, this bodes very well for the future of PC gaming regardless of style or theming, as it means not only graphical showcase games, such as

, will benefit from the tech.

Overall, the graphical overhaul does have a pleasing ‘sparkle’ to what was already a visually interesting game. Any fans of the game hoping to enjoy the new look for the game will have to go

series card of their own.