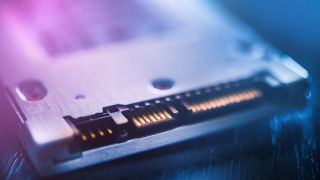 Micron has just announced its next generation of 3D NAND. At 176-layer, the new chip offers a 37% improvement on its nearest competitor, Kioxia/Western Digital’s 112-layer BiCS5.

The company says the new NAND will improve both read and write latency by more than a third compared to last generation’s 96-layer floating-gate NAND, which could mean faster and cheaper

The manufacturer also claims to offer a die that’s about 30% smaller than competitive offerings and hits a whopping 1.6 gigatransfers per second (1600 MT/s) on the Open NAND Flash interface bus – a double digit improvement on past generations.

And here’s the kicker: the 3D NAND chips are already in volume production and shipping to customers, including in Micron’s own Crucial SSD product lines.

Ultimately, what the announcement means for the end user is more power efficient, faster, smaller and cheaper SSD designs. For the datacenter audience, meanwhile, the new chips will deliver endurance improvements, which are particularly beneficial in write-intensive use cases.


, the largest solid state drive currently on the market, is likely to use 64-layer SLC NAND, which explains its eye-watering price of $40,000. For comparison, the cheaper


from the same company is likely to use 96-layer TLC NAND chips, which slashes its price to a mere $10,900 – less than half the cost per TB.

Micron’s new technology could either mean more SSD for your money (e.g. 100TB for $10,000) or far lower price points. Ultimately, the firm wants to drive aggressive, industry-leading cost reductions that will hopefully trickle down to the end user.

That means hard disk drive vendors like Seagate, Toshiba or Western Digital may want to watch their back in the datacenter/nearline market. Micron’s new chips could usher in a new generation of extremely high capacity 3.5-inch SSD drives at relatively low entry points to replace existing spinning drives.