As custom RX 6000 graphics cards sell out in a flash 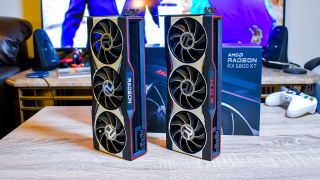 stock issues continue to rumble on upon release of third-party (custom) models, which isn’t exactly unexpected – but whispers from a European retailer carry a more worrying suggestion that supply problems could continue for months.

reports that in the US, third-party cards pretty much vanished in a flash during their launch yesterday, and some major retailers didn’t even have any such

custom models to sell in the first place – like Micro Center.

Tom’s observes that all tech stores have sold out their stock of third-party Big Navi cards, and AMD’s reference boards for that matter, in a by now familiar scene similar to how Nvidia’s launches played out (in a word – badly).

It is, unsurprisingly, the same tale of Big Navi stock woes in the UK, and other regions for that matter.

With third-party graphics card makers apologizing for shortages on Twitter, Tom’s further theorizes that we won’t see any meaningful volume of stock for AMD’s new GPUs until 2021, and that is sadly reinforced by word on the grapevine from a Dutch online retailer.

In a separate article,

reports that Dutch retailer Azerty issued a statement to say: “Unfortunately, many manufacturers are not yet clear about the specifications and prices of these [Big Navi] video cards, and all cards have an unknown delivery time. As soon as information about new models is available, we will post them on our site.

“We know that there is a lot of demand for RX 6800 (XT) video cards. Supply is very scarce and delivery times are unknown … As soon as there is really concrete information about delivery times and availability, we can share this, but at the moment there is no news.

Finally, Azerty notes: “We are hearing signals in the market that the delivery problems of these cards could last for many months, well into 2021. We therefore advise our customers to take into account delivery times of RX 6800 (XT) video cards of several months.”

That could be for the European market, not necessarily the US as well – or it could be completely wrong for that matter – but it’s certainly a worrying signal, and one which echoes what we’ve heard from Nvidia; namely that RTX 3000 stock problems won’t be rectified until 2021, and

perhaps not until February

This is clearly a very disappointing situation for those who are hunting for a new graphics card right now, and it’s made more disappointing because the rumor mill had previously indicated that AMD’s stock levels could be beefed up considerably before Nvidia,

with things expected to get better in December

. But obviously that’s not the case for Big Navi if this latest buzz on the GPU grapevine proves to be on the mark…

Again, this is further fuel on the fire to the theory that some folks are advancing, speculating that AMD has seriously overcommitted in terms of having these big PC launches – of course

, too, and sold out – alongside producing chips for Sony and Microsoft’s new consoles.