SAM is now (unofficially) available for X470 and B450 boards, with full support expected to roll out from January 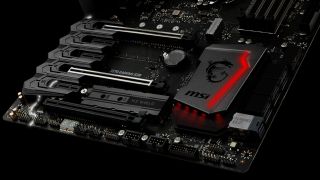 AMD’s Smart Access Memory (SAM) tech, which boosts performance and helps games run faster – some titles more than others – is now available to folks who don’t have one of AMD’s newest 500 series motherboards, at least in unofficial beta form.

processor, and the other stipulation was having a new 500 series motherboard.

There was some concern that AMD might keep SAM exclusive to these new components as an incentive to upgrade, but the good news is this isn’t the case, and those with last-gen X470 and B450 motherboards will – and in some cases, can now – benefit from the tech. (Incidentally, SAM will also be coming to

, as we recently found out).

SAM allows the CPU to get full access to GPU memory, lifting memory restrictions in order to give a decent performance boost (some games can benefit to the tune of 10%, others more like 5% – so it’s certainly a worthwhile bit of tweaking). The downside is it’s not trivial to get SAM working, and it involves playing around in the BIOS, which not everyone will be comfortable doing (as we discuss in our

Only certain X470 and B450 motherboards are supported right now, in beta form, and if yours is one of them, you will need to ensure that you grab the BIOS update that brings in AGESA v2 1.1.0.0.

If you want to run a Ryzen 5000 processor – which as mentioned is a required component for SAM – you’ll need to upgrade to AGESA v2 1.1.0.0 anyway, as this is necessary for a Zen 3 chip.

Supported motherboards with the requisite beta BIOS updates include ASRock with its B450 boards, and Gigabyte with support for X470 and B450 boards. Remember that these are unofficial updates, though, so as ever with beta firmware, apply at your own risk.

MSI has also rolled out support for X470 and B450 motherboards to testers at this point, but is waiting for the official AGESA firmware release which is expected to arrive in January 2021 before rolling out to customers. Asus has an AGESA 1.1.8.0 firmware with SAM support, but again this is beta, and indeed not supposed to be released to the public – AMD has confirmed as much, and the official line is to wait for the aforementioned official release in January.

That’s only a couple of months away, of course, and that might give you time to actually find a Big Navi graphics card and/or Ryzen 5000 CPU to buy, because right now, they are

thin on the ground to say the least