Going by figures from one European retailer, and a broad overview of initial stock levels 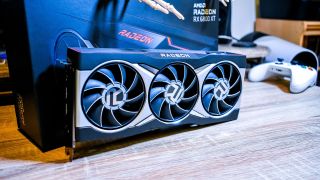 could have been in shorter supply on their launch than rival Nvidia’s Ampere models, at least going by one report – which is pretty disappointing news, particularly as it was suggested that

RX 6000 GPUs would be more plentiful

has highlighted stats from one particular European retailer, as well as providing an overview of some other stockists’ troubles with getting supply of

The figures come from Danish retailer Proshop, which VideoCardz has been monitoring for Nvidia’s RTX 3000 stock levels

. As the site points out, and as everyone saw, both the RTX 3080 and 3090 were extremely thin on the ground at launch, but RTX 3070 numbers were ‘in the hundreds’ for Proshop before it hit the virtual shelves.

Obviously that still wasn’t enough – not nearly – to cope with demand, but on the AMD front, Proshop has only received and sold 125 RX 6800 and 6800 XT GPUs, most of them (100) being the former, and all of them reference boards.

As for third-party custom Big Navi graphics cards, which were released earlier this week – and folks were hoping would really beef up availability – the situation turned out to be even worse: Proshop received none, and only nine are incoming, according to this report.

Of course, this is just a single report, so we have to be careful about drawing any firm conclusions here, but the way the AMD RX 6000 launch has played out seems clear enough – and as we

reported earlier in the week

In the US, some major retailers came up completely empty, like Micro Center which didn’t have a single model to sell.

The VideoCardz report outlines the situation in the UK – and elsewhere – noting that Scan has no stock, and Overclockers doesn’t either. In fact a rep from the latter noted that it was very unlikely that any custom models would turn up this week, and that it would be more like next week for stock to be available.

that the retailer “might struggle to see a few hundred cards this side of Christmas”, which again is hardly positive news for those who wanted to get a new AMD GPU this year.

, specifically that: “We are hearing signals in the market that the delivery problems of these cards could last for many months, well into 2021. We therefore advise our customers to take into account delivery times of RX 6800 (XT) video cards of several months.”

All of which goes against the previous rumors that

. Of course, we can’t go by suggestions on the grapevine, so who knows, AMD may still turn things around as soon as next month – but it’s not looking particularly hopeful right now.

in terms of these GPU launches is looking like a rather unwise move now. And Azor’s latest revelation on

– that he managed to order an RX 6800 from the AMD site himself, after a bit of hitting refresh – hasn’t exactly helped either…