AMD RX 6900 XT graphics card could be an overclocking champ 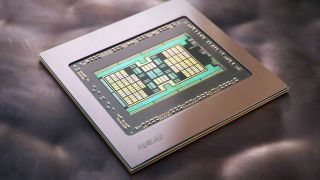 AMD’s Radeon RX 6900 XT, the flagship product which will be the final graphics card of the initial

launches when it comes out in early December, has a higher maximum clock speed than the

Well-known leaker Patrick Schur poked around in the BIOS of a 6900 XT reference card and found that its maximum graphics clock is set at 3GHz, which is 200MHz above the 2.8GHz limit seen in the RX 6800 XT.

So, assuming this finding is indeed correct as presented, buyers of the flagship Big Navi reference board will have a bit more headroom when it comes to juicing up the GPU.

That’ll be good news for serious overclockers looking to set records, of course. The RX 6800 XT has already been

clocked to that 2.8GHz limit

this GPU has been pushed to 2.65GHz

(which is quite a feat).

So enthusiast overclockers will obviously be getting excited about the potential for driving that little bit harder with the 6900 XT, in theory.

, which spotted this development, notes, there is also the potential for the hardcore GPU tweakers to attempt to bypass the card’s limits using a custom BIOS and perhaps push even further with exotic cooling like liquid nitrogen.

AMD’s RX 6900 XT bumps the spec up to 80 CUs (Compute Units) compared to the 72 CUs of the 6800 XT, although the stock clocks remain the same with AMD’s reference boards. So the CU increase is where the 6900 XT’s performance gains will come from (except maybe for overclocking, because as we’ve seen, theoretically there will be more room for maneuver with the 6900 XT as well).

Of course, if you want the power of the biggest Big Navi graphics card, actually buying an RX 6900 XT when it launches on December 8 might be challenging to say the least. Thus far,

Big Navi GPU stock has been in even shorter supply

than Nvidia’s RTX 3000 launch, which is very disappointing considering that

AMD hinted this wouldn’t be the case

The rumor mill has previously indicated that

, but the latest speculation we’ve heard goes against this, and suggests we might not see

meaningful inventory levels of RX 6000 cards until well into 2021