Reportedly has higher clock limits than the RX 6800 XT, surprisingly 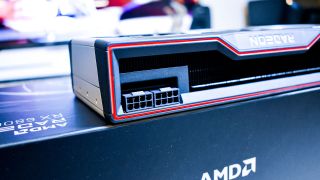 expected to emerge at the start of 2021

(along with the vanilla RX 6700), and a new leak points to this GPU being an excellent overclocker – and indeed surprisingly good for the more affordable (relatively speaking) end of the market.

The AMD RX 6700 XT will join the existing

, pitched as a more wallet-friendly offering to go up against what Nvidia has planned for the mid-range – which is seemingly the

(which is expected imminently), and possibly the

has been poking around in the BIOS of an RX 6700 XT (well, actually two of them, apparently provided by leaker Patrick Schur), and has found that AMD’s limit for the clock speed of this GPU is set at 2.95GHz.

That’s startlingly high for this lesser model in the RX 6000 series, given that the RX 6800 has a lower ceiling of 2.8GHz. Even the RX 6900 XT reportedly has its maximum graphics clock set at 3GHz, as

, which is barely any faster than the purported limit for the 6700 XT.

Those aren’t nearly the speeds that these graphics cards will actually run at, of course, off the shelves, so why does this matter? Well, it shows the lure that these GPUs will have for expert overclocker types who will really power up the cards with big overclocks and exotic cooling – but it also points to the potential that more basic overclocking measures might achieve.

using just the stock fans on the card and no fancy cooling, which is very impressive. This new finding, if it’s on the money – let’s reserve some pinches of salt here – could indicate that the incoming 6700 XT GPU could be an even better overclocker for those who wish to tweak their graphics card without going for over-the-top cooling measures.

As Tom’s notes, Igor’s also found that the 6700 XT BIOS apparently facilitates higher power limits (and core voltage) compared to the RX 6800 reference board, which could mean that third-party custom 6700 XT graphics cards might come with some seriously fast factory overclocks.

That’s speculation, of course, but an enticing prospect nonetheless. We’ll know the truth of the matter soon if we do indeed see the

RX 6700 XT turn up in January as expected

, although stock levels of AMD graphics cards (and Nvidia’s for that matter)