Going by sales figures from one major European retailer 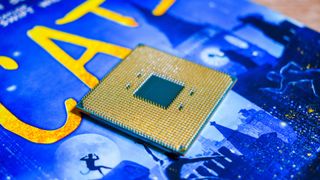 have helped the company hit new highs for sales of its CPUs, at least according to the latest figures from one European retailer.

The breakdown of German retailer MindFactory’s sales, as provided by Reddit user

who delivers monthly stat updates, shows that AMD sold 35,000 units of Ryzen 5000 and Ryzen 3000 CPUs (and a scattering of 2nd-gen chips), whereas Intel only managed a tally of just over 5,000 units shifted.

This was a new high for AMD in terms of overall sales in 2020, and once again the firm held the lion’s share of the CPU market going by these statistics, with 84% in terms of both units shifted, and also revenue (leaving Intel on 16% in both cases, of course).

Ryzen 5000 CPUs accounted for approaching 6,000 units of AMD’s total of 35,000 sales, although it almost certainly would have been more but for stock shortages.

AMD’s bestselling individual processor remained the Ryzen 5 3600 with around 5,200 units sold, just ahead of the 3600XT and

Intel did also witness its best month of 2020, too, in terms of numbers of processors sold, but AMD had a predictably stronger uptick.

Intel’s best-selling individual chip was the

which sold close to 1,300 units, but only managed to hold the number 12 spot in the rankings of the top CPUs (AMD dominated the entire top 10, in other words).

Of course, these statistics pertain to just a single retailer, and the picture may be different elsewhere – but as a general indicator, the state of play regarding the desktop CPU market seems clear enough, and has been for a long while now.

When AMD’s Zen 3-based Ryzen 5000 processors become available in stronger numbers, we can doubtless expect the gap with Intel to increase further.

Intel desperately needs to bring its next-gen Rocket Lake chips to market as soon as possible in order to counter the threat from Ryzen 5000. We have

, but of course a lot will also depend on how prices shape up compared to AMD’s rival chips.