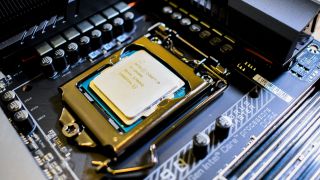 AMD recently introduced the nifty Smart Access Memory (SAM) feature with its latest hardware, but we already know that this performance boosting tech will work with Intel products too – and apparently very well, seemingly with even better results than AMD has seen thus far.

SAM is currently (at least

CPUs (with 500-series motherboards, so all the newest kit basically), but wider support is coming, not just for

Intel CPUs as mentioned, as well as Nvidia graphics cards

That’s because SAM works by tweaking PCIe’s resizable BAR (base address register), and there’s no reason that can’t be implemented outside of AMD hardware – and Asus recently paved the way for that happening in practice.

Testing was then conducted on a small selection of games running at maximum settings on Full HD resolution with some impressive results – up to almost 20% gains, in fact, whereas AMD’s early SAM testing showed more in the ballpark of 10% gains (pushing up to 12% with Forza Horizon 4 at 4K resolution).

Obviously we have to take ASCII’s testing with a healthy dollop of caution, and an apples-to-apples comparison is needed, anyway – but there’s no denying that the likes of a 14% boost in the average frame rate of

Red Dead Redemption 2 showed a more modest improvement of just under 8% for the average frame rate, although the minimum frame rate – the slowest dip – was up 181%, meaning those occasional moments of severe jerkiness in the benchmark were very much improved.

Further remember that this is using beta firmware with the Asus motherboard, and the final release could see more improvement still.

Here – and for that matter everywhere else – the results of this tech do vary, and as Tom’s observes, with some games resizable BAR makes no difference whatsoever (for example, ASCII found this was the case with Tom Clancy’s Rainbow Six Siege).

Clearly it does a sterling job in some circumstances, though, and the sooner this tech is more widely proliferated among Intel processors and indeed

, the more gamers who’ll be able to benefit from sizable – or indeed resizable – frame rate gains.