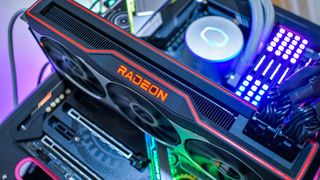 flagship GPU tomorrow, and an early statement from a European retailer appears to confirm fears that supply will be woefully short (

just as it was with the RX 6800 series launch

Major Swiss retailer Digitec will only have 35 of AMD’s 6900 XT graphics cards for sale on December 8, as

Digitec recently issued a statement to say: “Today, December 4th, we learned that we will be receiving 35 AMD RX 6900 XTs in a reference design. Delivery dates are currently still unknown. Just as with the

, there won’t be enough cards to go around.”

Given the very limited availability and inevitable rush of gamers looking to snag a Big Navi GPU, Digitec has made the decision to sell these RX 6900 XT cards as a lottery.

In other words, you’ll need to log in to your account with the retailer and click a button on the product page that will be displayed upon launch tomorrow, in order to enter yourself for the draw – and then keep your fingers crossed that you win.

That seems a fair enough way of doing things, but it’s a pretty sad statement on the current picture with new GPUs and production capacity that you have to win the ability to pay a grand for a graphics card.

While early rumors suggested that

, the latest we’ve heard from the graphics grapevine suggests otherwise – and in fact

just as is the case

with Nvidia’s RTX 3000 inventory, the situation might not get meaningfully better

Note that the AMD RX 6900 XT graphics cards which are initially arriving are all reference boards, although custom versions have

supposedly been greenlit by AMD

, and could emerge soon enough – or at least that’s the rumor. However, if stock remains a big ongoing struggle, expecting custom variants in anything like the near future is probably very optimistic…