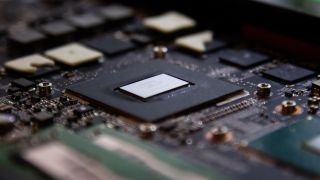 , a HP OEM driver lists several device IDs of graphics cards that have yet to be released, and with

a bit of research by the Laptopvideo2go forums

We’ve not seen that evidence, and due to the nature of this rumor we’d take this all with a hefty dose of salt, but with the growing amount of RTX 3080 Ti leaks that have been popping up recently, we’re becoming more convinced that Nvidia is prepping to launch this GPU at some point.

The fact that the Nvidia GeForce RTX 3080 Ti has popped up in a laptop and PC maker’s drivers means we could see the new GPU soon, and it again looks like the RTX 3080 Ti will come with 20GB VRAM.

This would put it between the

It would also give Nvidia a card to compete with AMD, which recently launched the

, which comes with 16GB of GDDR6 memory.

All rather exciting, unless you bought an RTX 3080, perhaps. That card being so quickly supplanted by a more powerful variant (Nvidia usually leaves it quite a while before releasing a ‘Ti’ or ‘Super’ version of a GPU) may not go down too well.

Also, with Nvidia still struggling to meet demand of the RTX 3080, along with the RTX 3090 and

, the fact that it’s planning

If the Nvidia GeForce RTX 3080 Ti does indeed exist, you can be sure that we’ll be getting our hands on it and giving it a thorough review soon.