All about the cores 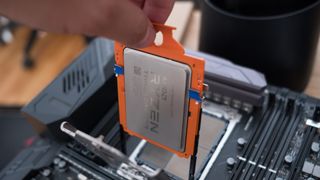 AMD appears to be working on a new Threadripper 5000 series processor, but a new rumor suggests that the company could be moving back to 16 cores.

Usually, a 16-core CPU would be considered extremely powerful and high-end, but recently AMD has been shipping Threadripper processors with 24, 32 and even 64 cores.

Meanwhile, more mainstream processors, such as the

, now come with 16 cores, so this news – if true – may disappoint people who are hoping for a new Threadripper announcement boasting even

The new rumor comes courtesy of a cryptic tweet by Yuri ‘1USMUS’ Bubliy, who developed the Clock Tuner for Ryzen tool, which you can see below:

What does it mean?

The riddle is a HEX code, which when translated to plain English, says “Genesis 16 Cores”. Genesis Peak is the codename of the Zen 3 Threadripper series, which will be powered using the same architecture to AMD’s

So, it seems Bubliy is referring to a 16-core Zen 3 Threadripper processor. While the original Threadripper came with 16 cores, with the Zen 2 generation, AMD skipped 16 cores.

Threadripper processors are high-end desktop (HEDT) components that are aimed at serious enthusiasts and content creators, so the idea that a new Threadripper will come with the same core count as a mainstream CPU could dilute the ‘premium’ image of the product line. However, it appears that the new Threadripper, which could be called the Threadripper 5950X, according to rumors, will still have a performance advantage over the 16-core Ryzen 9 5950X, thanks to rumored quad-channel RAM and extra PCIe lanes.

Finally, this is all rumor and speculation at the moment, so this should all be taken with a grain of salt. With

starting in a matter of days, if AMD

planning on revealing its new lineup of Threadripper CPUs, we may not have long to wait.