Offers 38% improvement over its predecessor 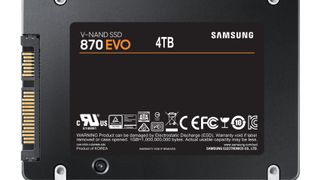 Samsung Electronics has announced the launch of 870 EVO SSD, the company’s latest SATA solution as a part of its

The new drive, which touts itself high on performance and reliability, is slotted as an “all-round storage solution” for a wide range of consumers from general PC users to IT professionals.

The Samsung 870 EVO features the company’s latest V-NAND and controller, allowing it to reach the maximum SATA sequential read and write speeds of 560 and 530MB/s, respectively, the company said in a press statement.

According to Samsung, the 870 EVO also delivers a nearly 38% improvement in random read speed over the previous 860 model, enabling enhanced user experiences when multi-tasking, web browsing or simply booting up PCs.

It also said that 870 EVO offers around 30% improvement in sustained performance over the 860 EVO, as well as a class-leading terabytes written (TBW) rating of 2,400TB,4 or a 5-year limited warranty, for its 4TB model.

Compatible with many devices

The 870 EVO provides broad compatibility with many computing devices and the most up-to-date PC features. The drive can be used with all devices that have 2.5-inch SATA interface connection.