It’s a cut-down model anyway, and will only be sold as part of prebuilt PCs 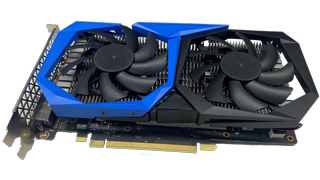 has made the transition from laptops to a

, as we’ve just heard, and the launch announcement clarified that it’ll only be supplied to PC makers – but there’s a further caveat involved in that AMD CPUs won’t work with this GPU.

In other words, the PCs being sold with the Iris Xe card must be running an Intel CPU (so they’re effectively all-Intel systems).

If that seems a slightly puzzling move – as

chips are, well, kind of popular these days – the explanation is bound up in the fact that the Iris Xe GPU requires a special BIOS to run. Indeed, it’ll only be supported by certain Intel motherboards and chips – just the newest two Intel Comet Lake and Coffee Lake generations are compatible.

: “The Iris Xe discrete add-in card will be paired with 9th gen (Coffee Lake-S) and 10th gen (Comet Lake-S) Intel Core desktop processors and Intel B460, H410, B365, and H310C chipset-based motherboards and sold as part of pre-built systems. These motherboards require a special BIOS that supports Intel Iris Xe, so the cards won’t be compatible with other systems.”

As you can see, there’s no support for Intel’s Z490 boards here, for example, but as mentioned, this Intel GPU is not meant for sale to consumers, and is designed to be used in budget-friendly prebuilt PCs.


The spec of the Intel Iris Xe

(previously known as DG1) aimed at value desktops is cut-down from the laptop GPU, and it runs with 80 execution units, as opposed to 96 for the latter – with the same limited quantity of 4GB of LPDDR4X RAM on-board (and a 128-bit bus).

So, as you can see, the news that AMD chips are definitely out of the picture with the first discrete GPU for consumers that Intel has launched in over two decades is limited in terms of the impact of its disappointment.

People won’t be getting excited about these GPUs anyway, beyond thinking about low-budget PCs. The real test of Intel’s desktop mettle will come with DG2, the

follow-up aimed at competing with AMD and Nvidia’s gaming products, and making the desktop GPU world a three-horse-race.

Technically speaking, of course, it’s already a three-horse-race as of now, except nobody will be putting any money on Intel’s launch steed.

DG2 could be out later this year