Graphics card registered with regulators, hinting that it could be out sooner rather than later 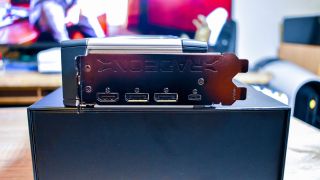 has been spotted lining up for certification by the Eurasian Economic Commission (EEC), and the GPU is shown as having 12GB of VRAM as previously rumored.

Normally, graphics cards get registered with the EEC not long before their release, so the appearance of six different models of RX 6700 XT from Gigabyte (highlighted on Twitter, as spotted by

) suggests that the launch date for AMD’s next Big Navi GPU is drawing near.

The Gigabyte models shown include Aorus, Gaming (plus Gaming OC – meaning overclocked) and Eagle (plus Eagle OC) variants of the RX 6700 XT, and all are marked ‘12G’ to indicate that they will be loaded with 12GB of video memory.

The rumor mill has been claiming that 12GB loadout for a while now, so this seems to underline that, although we obviously won’t know for sure until we see the 6700 XT spec details for real.

As to when this mid-range AMD graphics card might arrive,

March has been the date floating around the rumor mill

recently, although that’s a tentative piece of speculation – but this EEC sighting could hint that the launch may just happen sooner rather than later, as mentioned.

Then again, all AMD has previously said is that new RDNA 2-powered graphics cards will turn up at some point in the first half of 2021, which is pretty vague – and of course

is the ‘tightness’ of supply with AMD’s GPUs (and CPUs) regarding stock levels going forward in H1 of 2021.

Whenever it eventually turns up, the RX 6700 XT is rumored to have 40 compute units and 2,560 stream processors, and assuming it does have 12GB of VRAM, it’ll likely run with a 192-bit bus. Take all this with a good deal of caution, as ever, though.