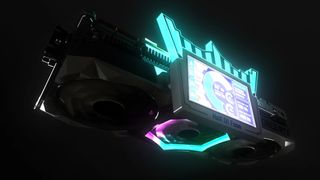 Overclockers have managed to notch up a mind-boggling 3.0 GHz clock speed with the Galax RTX 3090 HOF, an impressive figure considering the card’s 1.39 GHz base clock.

The HOF is listed with a 1.8 GHz boost on the


, although it will go beyond that when used alongside Nvidia’s GPU Boost. But thanks to the use of liquid nitrogen-cooled setups and GPUPI software, both OGS from “HwBox Hellas OC Team” and Rauf from “Alza OC” have managed to overclock their limited edition GPUs to 3.0 GHz, and hitting faster speeds than ever before.

It’s a particularly impressive feat considering it took overclockers some two years to get an RTX 2080 Ti running at these kinds of speeds, so to have achieved these figures before the graphics card is even on sale to the mass-market suggests the future is bright for the power of premium GPUs.

But reaching speeds of 3.0 GHz isn’t the only record overclockers have broken using the GeForce RTX 3090 HOF.

Galax announced that the RTX 3090 HOF cards were able to break a total of 16 (sixteen!) different world records, suggesting the GPU will come roaring to market already at the top of the pile. We’ve listed all of them below:

The GeForce RTX 3090 HOF doesn’t just stand out in performance, either. One of its biggest quirks is the inclusion of the HOF Panel III, a 4.3-inch TFT LCD monitor with a 480 x 272 resolution that displays the graphics card’s vitals. The screen can function as a standalone monitor or can be attached to the graphics card itself thanks to an integrated magnet.

Basically, the GeForce RTX 3090 HOF is a beast whichever way you look at it.