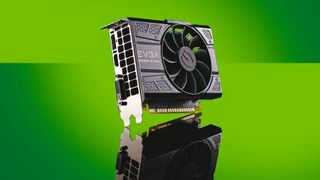 These are strange (and very frustrating) times for anyone wanting to buy a new graphics card, and it looks like Nvidia has decided to partially address the problem by re-releasing the

– a Pascal-based graphic card it stopped selling two years ago.

Between supply issues due to the Covid-19 pandemic, TSMC, the semiconductor foundry that Nvidia uses for its GPUs, being under increased pressure from other clients, and

, Nvidia is bringing back the GTX 1050 Ti to try to help things – at least at the low-end of the market.

The new GTX 1050 Ti will apparently have the GP107 chip and come with 4GB of video memory. This is obviously not going to help anyone hunting for a high end

, but the idea is that it will at least give people looking for a budget GPU something to go for – and could mean Nvidia can concentrate on getting higher end RTX 3000 GPUs into the hands of gamers.

, mining for Ethereum, one of the most popular cryptocurrencies, needs over 4GB of VRAM, which means the GTX 1050 Ti should be left alone by miners.

It looks like GTX 1050 Ti cards are already reappearing on retailers’ websites, and we could see more stock coming soon.

Along with news that Nvidia is bringing back the

, it looks like the company is trying to alleviate pressure on its more affordable GPUs.

The company is expected to launch

. When this GPU gets launched, we expect it to be quite tricky to get hold of.