Thanks to a new plug-in for Unreal Engine 4 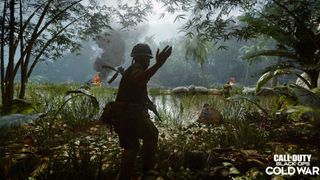 , could soon be supported by a lot more games, as it has now arrived on the Unreal Engine marketplace.

It’s available as a plug-in for Unreal Engine 4.26, specifically, and this means that any developers making games with Unreal Engine – which is used to power quite a number of titles – can much more easily incorporate DLSS.

In short, devs using Unreal Engine can now just employ the tech off the bat, rather than having to go through the process of contacting Nvidia and applying to get on board with the DLSS Early Access Program.

So, we can expect more developers to do exactly this, and get the benefits of DLSS in their games.

has also brought its Reflex feature to Unreal Engine 4.26, which aims to reduce the latency between the CPU and GPU, and is designed for the likes of competitive shooters.

DLSS (which stands for Deep Learning Super Sampling) uses the tensor cores in Nvidia’s GeForce RTX cards to essentially upscale a game’s resolution, letting you play in, say, what looks pretty much the same as 4K but is actually 1440p upscaled (and hence has a much lighter load on the GPU – meaning faster overall frame rates).

This is great for demanding games, and indeed for the ray tracing you also get with RTX graphics cards, as the latter is a tough prospect for any GPU to tackle, so DLSS really helps ease the burden.

DLSS made great strides when

, although we have argued in the past that while the tech is certainly very impressive now, it’s almost

As mentioned, games need to be coded to support DLSS, although there are already a fair few titles which do so including Cyberpunk 2077, Call of Duty: Black Ops Cold War, Control and Death Stranding. We’ve made a list of the

You may also be wondering: does AMD have an equivalent of DLSS? Not yet, but

to up the ante with its